When you've played for as long as Tim Cahill, scored as many goals as him and you love to celebrate them, something is bound to go wrong occasionally, as we saw when the Central Coast Mariners ball boy pulled a swifty on the Socceroo legend on New Year's Eve. 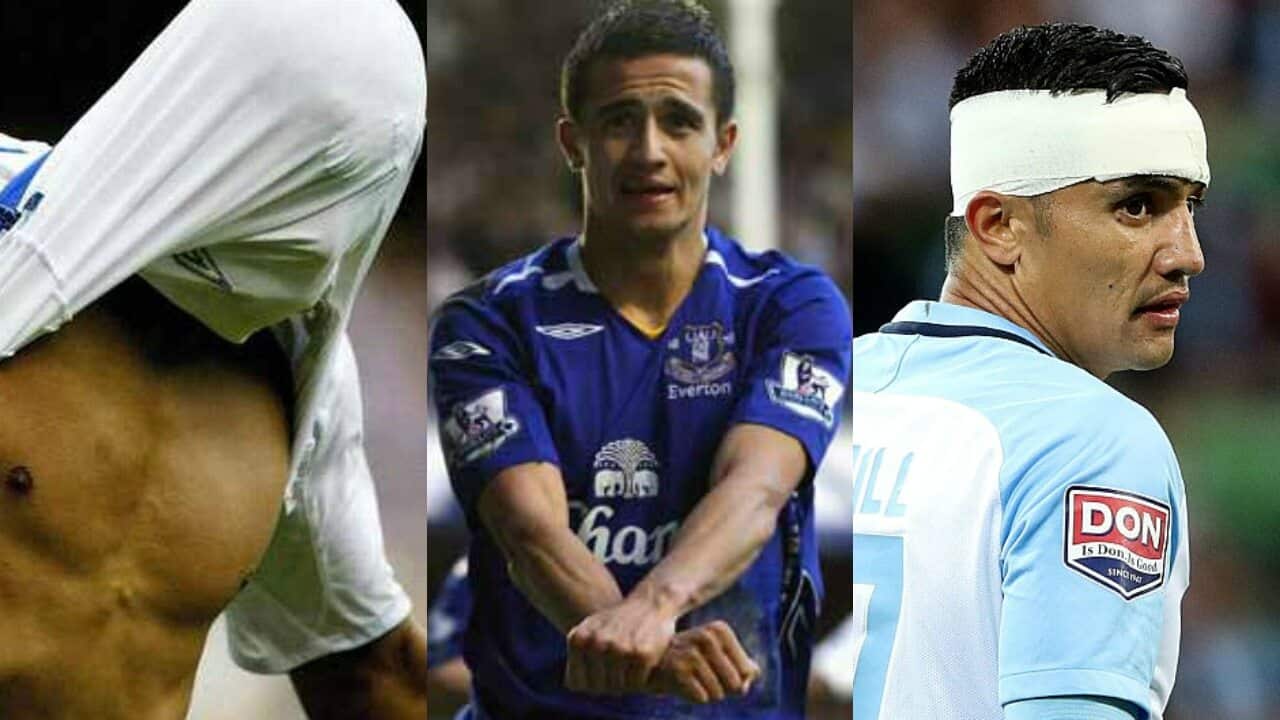 Cahill's corner flag boxing celebration has become a fantastic trademark, but he has also had his share of celebratory misfires. The World Game has identified the top five.

Advertisement
It was 0-0 late in the friendly at ANZ Stadium when Cahill smashed home a header from close range off an Alex Gersbach corner and set off on a wild celebratory run.

He hurdled the advertising hoarding behind the goal and angled towards the sideline, ripping his shirt off and swinging it above his head with one hand as he used the other to brush the outstretched hands of fans while heading towards halfway on a quarter-lap of honour.

Only problem was, the goal had been disallowed because the linesman ruled the ball had swung out from the corner kick before coming back in.

Cahill finally threw his shirt in the air before turning around to realise something was wrong and that it was not a goal after all.

It was one of those moments when you realise everyone is looking at you - but not for the reason you had wanted.

Mathew Leckie scored a late, late goal to give Australia a 1-0 win.

Cahill marked his first goal since his brother, Sean, had been jailed for an assault that left a man partially blind by crossing his wrists as if handcuffed.

It was an emotional show of support by Cahill, who after the game said of his brother "I'm thinking of him always".

But his action caused controversy and a couple of days later he released a statement in which he apologised, saying: "It was a spontaneous and emotional reaction, but was only intended to signify to my brother that I was thinking of him and missing him.

"It was not intended to cause any offence to any other party and I whole-heartedly apologise if any offence was caused."

Cahill opened the scoring at AAMI Park with a typically classic header and dashed off towards the corner post, only this time he kept going, hurdling the sideline advertising hoarding and continuing on his run.

But he accidentally collided with a quartet of Victory substitutes who were headed to the end of the field to warm up and at the end of his run it was realised he had cut his head in the act of scoring, apparently in a head clash with Victory defender Leigh Broxham as they both went up for the ball.

Cahill had to have his head bandaged before he could continue playing. Victory came back to win 2-1.

Cahill became a victim of confusion over a new ruling related to the removal of shirts during goal celebrations when he scored in  a 1-0 win.

After he had pulled his shirt over his head, but not off, Cahill received a second yellow card to go with an earlier booking and was dismissed.

Everton argued the guidelines that had been outlined to them regarding the new rule meant a booking should only be made if the shirt was fully removed.

Cahill even received support from then FIFA president Sepp Blatter, who said: "A referee should never expel a player just because he pulled his shirt over his head, he should just have a word with him. If you take off your shirt and wave it over your head that's a different matter."

But despite the club's complaints the second yellow stood and Cahill received a one-match ban.

After Cahill had scored the opening goal of the match he headed for the corner flag, but the ball boy beat him to it, lifting the corner flag out of the ground and moving back several metres with it.

Cahill didn't bat an eyelid and went ahead with his boxing celebration anyway, at the spot where the corner flag would normally be.

After the game, the ball boy revealed it was a planned move to have a bit of fun at Cahill's expense, saying: "One of my mates and me, we had a plan if he scored we'd lift it out of the corner."

Cahill took it all in good spirits, tweeting afterwards: "Thanks for having me @CCMariners good to see you guys were ready and knew my celebration was coming."

When you hit the back of the net as often as Cahill does, you can afford to laugh when someone takes the mickey out of you.