Mat Ryan has the chance to further enhance his booming reputation on the world stage against Denmark on Thursday but his immediate future lies with Brighton - no matter what heights he scales at the FIFA World Cup. 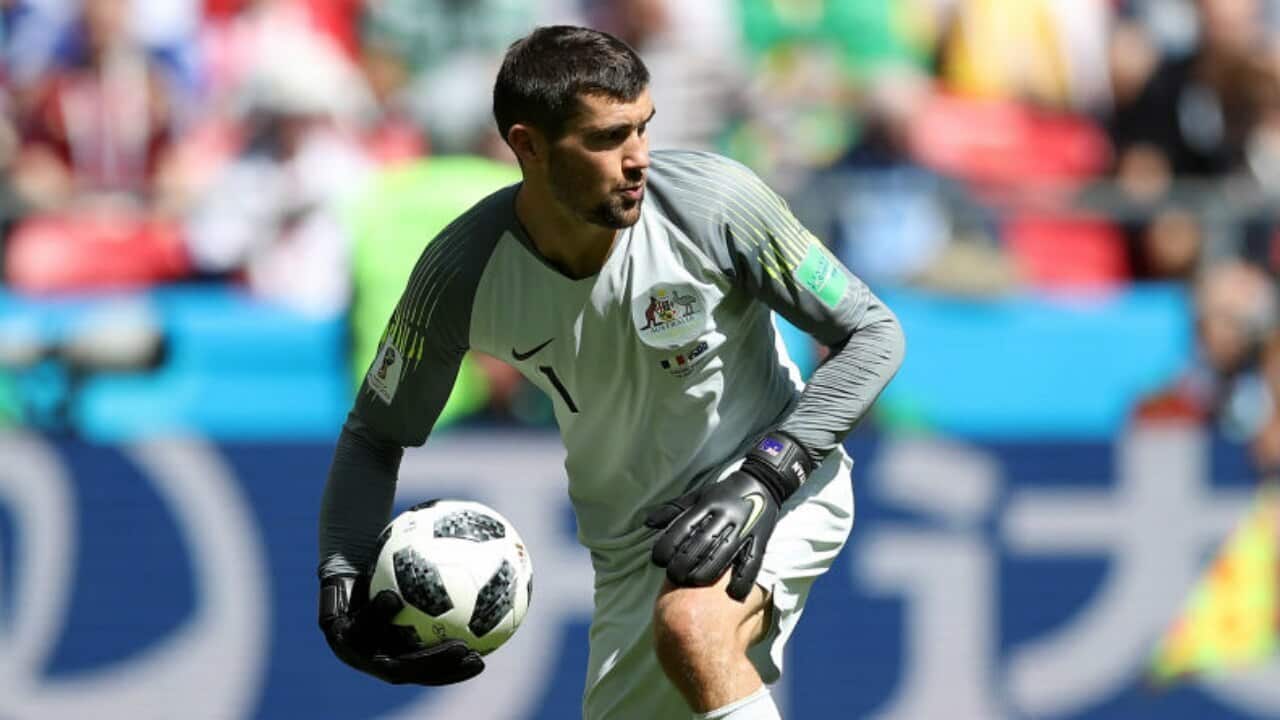 Mathew Ryan in action for the Socceroos Source: Getty Images

That’s the verdict of his agent, former Danish international Mikkel Beck, the man who has masterminded the European career of the Socceroos shot-stopper.

Speculation has surfaced that Ryan, on a high after helping the Seagulls to Premier League survival, might emerge as a target of an EPL heavyweight should he continue to excel in Russia.

His adept and athletic performance in Australia’s 2-1 loss to France in their Group C opener did nothing to dampen the narrative surrounding the gloveman.

Advertisement
But Beck, who will be in Samara to watch Ryan take on his countrymen, insisted there are no moves to leave England’s south coast any time soon.

“We’re very happy where we are at the moment, Maty has had a great season and is really enjoying life at Brighton,” he said.

“I’m not really in the market for a new club for Maty. In our world Maty is staying just where he is.”

Ryan is one year into a lucrative five-year contract with Chris Hughton’s newly-promoted side and played a massive part as Brighton avoided an instant return to the Championship.

He kept 10 clean sheets for the campaign, whilst facing the most shots (556) in the division and third-most on target (181).

“Playing In the Premier League week-in week-out has made him a better goalkeeper straight away,” Beck added.

“The match between him and Brighton is really the perfect match at this stage of his career.

“There’s no way we’re going to change that at the moment. It’s a very successful marriage.”

Ryan entered the World Cup as the most adept penalty-saving goalkeeper, stopping 11 of the 30 spot-kicks faced in his career.

Those stats place him above world class acts such as Manuel Neuer, David De Gea and Hugo Lloris.

Beck has no doubt that Ryan may one day take another big step as his career arcs ever upward.

“It’s not that I don’t think he cannot do it,” he said. “And of course in football you never know what’s around the corner.

“But I just want Mat to enjoy the big occasion and playing on the biggest stage.

“He did that in the first game and I’m sure he will continue to do so.

“He just has to concentrate on Australia. That’s all that matters really.

“Not many keepers play like him, that’s why he’s been top of so many of the statistics in the Premier League this season, whether it’s for his saves or how he deals with crosses.

“And that’s not to mention his distribution, which is second to none.

“Not many keepers in the world are as good with the feet, as well as his hands, as he is.

“To have him at the back you’re basically playing with 11 players when you have the ball.”