Future stars at the heart of Indigenous Football Week

In an Australian football first, a group of young Indigenous footballers from remote parts of the Northern Territory will walk out with the Socceroos ahead of their 2018 FIFA World Cup qualifier against Jordan at Allianz Stadium in Sydney. 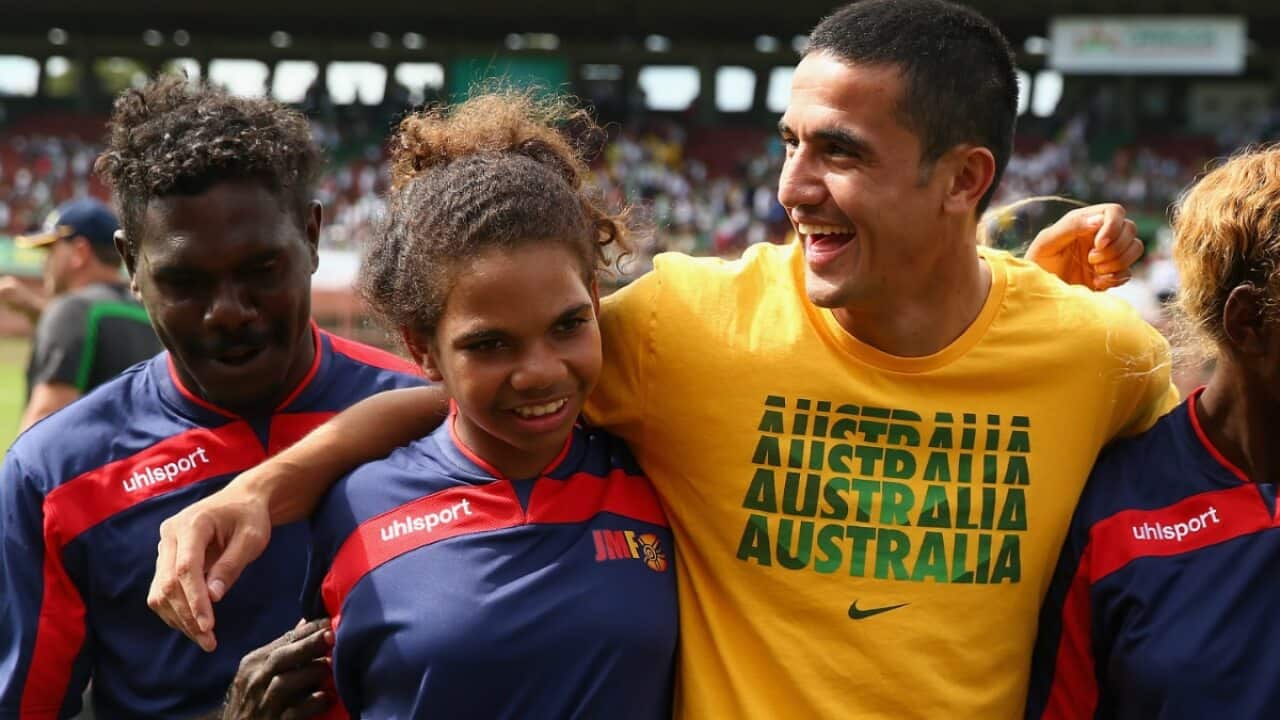 Indigenous Football Week will highlight the achievements of Indigenous players past and present, as well as the next generation of talent.

Critically, the initiative aims to raise more than $200,000 for John Moriarty Football, a not-for-profit organisation that works to improve education and life outcomes for young Indigenous footballers and their families in remote Australia, at the same time ensuring Indigenous football succeeds in Australia.

Supporters can visit the John Moriarty Football website (
jmf.org.au
) to donate, and can encourage family and friends to do the same by uploading and sharing a photo or video of their feet, barefoot, with a ball, or juggling or playing, to Facebook and Instagram using the hashtags #BarefootJMF and #GameChanger. SMS donations can be made by texting GOAL to 0455 021 021.

Gallop said that Indigenous football is a powerful agent of change and an emerging source of exceptional Australian football talent.

“We’ve seen the rise of many inspirational Indigenous players who have brought formidable craftsmanship and skill to the game over the years, including Harry Williams, Travis Dodd, John Moriarty, the first Indigenous player selected to represent Australia, and current players such as Jade North, James Brown, Lydia Williams, Kyah Simon, and Adam Sarota, to name a few,”  Gallop said.

“Football Federation Australia is proud to support an initiative which celebrates Indigenous footballers’ contribution to the game, and which, through John Moriarty Football, nurtures the next generation of breakthrough Indigenous talent.”

John Moriarty, founder of John Moriarty Football, said that the funds raised during Indigenous Football Week will go far in furthering programs that create life-changing opportunities for young Indigenous players, opening pathways for them to make their mark on Australian football.

“Our organisation works in two remote Indigenous communities in the Northern Territory, employing and developing local coaches to support Indigenous families and the wider community. We deliver more than 800 training sessions and games per year within a program that includes nutrition, mentoring and well-being for 300 kids aged 2 to 16.

“Indigenous Football Week will help us expand our reach to support and nurture more young Indigenous athletes with the talent and potential to succeed through sport; whether at grassroots or the highest national and international levels of the game.”

Rising football star Shadeene Evans, 14, is the first elite athlete to emerge from the John Moriarty Football program. Hailing from the Northern Territory’s remote Gulf of Carpentaria, Shadeene was scouted by Matildas coach Alen Stajcic in 2015 and has moved to Sydney’s Westfields Sports High School and the NSW Institute of Sport as the next step in her burgeoning football career.

“It is young players like Shadeene who are taking hold of the opportunities John Moriarty Football is creating, and we hope to support more young players just like her,” said Gallop.

“We are urging football fans across Australia to get behind Indigenous Football Week and donate to John Moriarty Football to strengthen the future of Indigenous football in Australia,” he said.

"We talk of Indigenous athletic talent and the global opportunity that only football can offer to play on the World Cup stage and this is true, but John Moriarty Football is not about what the game can gain from engaging Indigenous Australia, but the opposite.

“In this century, as Australia finally awakens to our responsibilities towards Indigenous self-determination, football offers the platform to expand the world of first Australians.

“This is important both for Aboriginal Australians to have the chance to show the world what they can achieve but also for the nation.

“There is no better place to do so than in a Socceroos or Matildas shirt. This is not only about talent, it is about showcasing the beauty and wonder of indigenous Australia through the global game.”