Egan Bernal (INEOS Grenadiers) won stage 9 of the Giro d’Italia and took over the race lead with an explosive attack on the steep gravel track at Campo Felice. The rest of the general classification contenders could only watch the explosive attack from behind, conceding time to the new race leader. 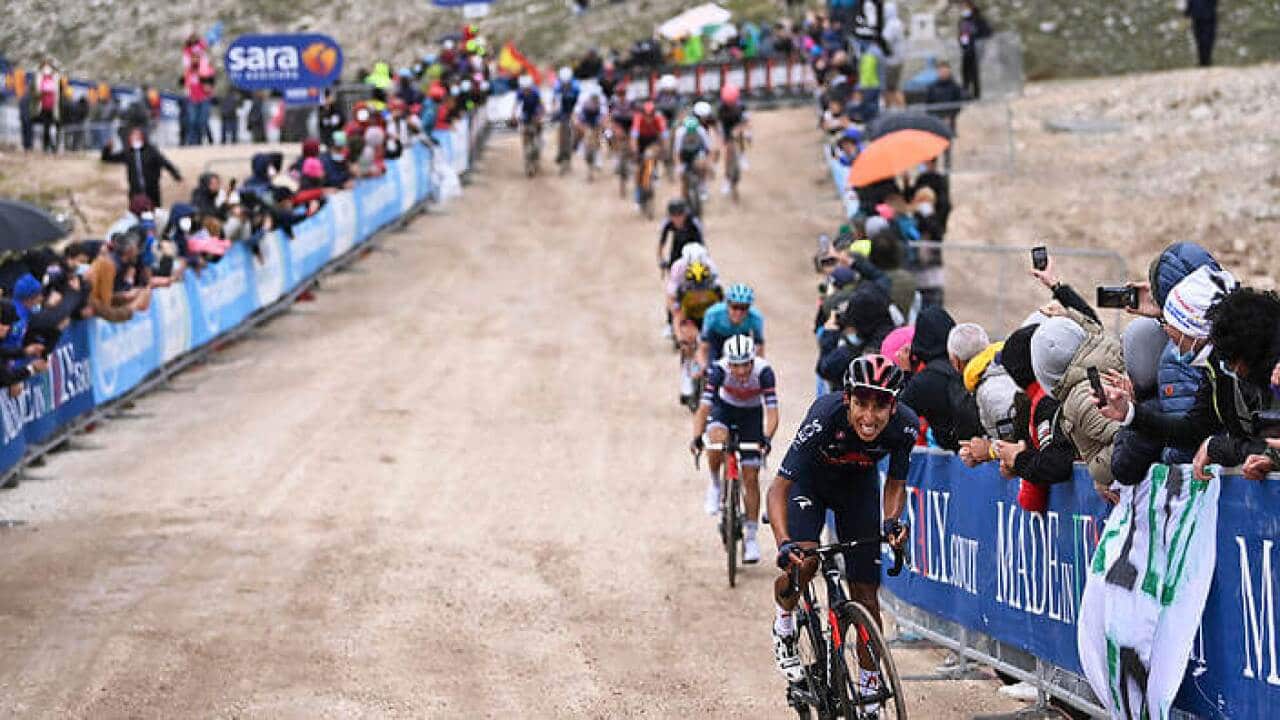 Egan Bernal leads the favourites on the summit finish to Stage 9 Source: Getty

Bernal overtook the remnants of the early breakaway like they were standing still on the loose surface that paced the final few kilometres of the Campo Felice climb. He left the rest of the general classification contenders in his wake with the powerful surge from 500 metres remaining, but despite the impressive pace, he was only able to put seconds into his rivals with the move.

Giulio Ciccone (Trek-Segafredo) and Aleksandr Vlasov (Astana-Premier Tech) were second and third at seven seconds, while Remco Evenepoel (Deceuninck-QuickStep) was ten seconds in arrears of Bernal in fourth to retain his second-place position on general classification.

Evenepoel was caught behind an incident in the tunnel where one of the INEOS Grenadiers riders nearly clipped Bernal's wheel and veered off course, hindering Evenepoel and seeing the young Belgian well out of position when the climb started.

"Because of that I was quite badly positioned, and although I could move up as much as possible and I gained quite a few places, I just missed out on the bonus seconds," said Evenepoel.

"I didn’t concede that much time, which is good ahead of next week. We can be proud of our work and of how the team rode today."

After dismissing the time losses as "almost nothing, as we know the big, big mountains are still coming,” he added: "I also kept my position on GC which is important for Wednesday."

"I tried to follow him, but he was really strong," Ciccone said. "When I saw him shift into the 53 ring, I tried to keep with my tempo but for sure he was on another level today. I think he is the best guy here and it will be hard to fight with him in the coming days."

"It’s true that I came to the Giro with other objectives in mind, and not the GC. So for that reason, I attacked a lot in the first week, to find a bit of morale and condition too, seeing as I hadn’t raced in a while."

"Then I understood that I was going quite well, that I had good condition, so in the last few days I’ve raced a bit differently, with an eye to saving myself a bit. I wasn’t burning myself out deliberately, I just had other intentions in mind. Now let’s say that things have changed a bit in the last few days."

The pink dream came to an end this Sunday for Attila Valter, on the gravel road of Campo Felice. In what was a very intense ninth stage of the Giro, the Hungarian held on to his leader’s jersey until the last two kilometers of the final climb before cracking a little and dropping away from the top contenders.

"I have to admit that even before the last climb I knew there was a high chance that I would lose the jersey,” said Valter. “I knew it was steep at the end, and on the gravel part, it’s really easy to gain ten seconds. Not to mention the bonus seconds.

"I managed to hold on until the tunnel, then tried to recover a bit and I gave my best on the gravel road. It wasn’t enough to keep the jersey but I wanted to show that I didn’t want to give it away so easily and I fought to the line. I suffered the whole stage, I was a little tired from the last few days and I did not have my best day on the bike."

“Even if I had somehow made it on the podium today, I would still have lost the jersey to an incredible Egan Bernal. I think there is no shame in losing the jersey after such a hard stage. I’m still fifth overall after nine stages. If I had been told that before the Giro, I would have signed for sure”.

“For sure I’m happy, I had three beautiful days. I’m also glad I have a little more time now to think about these three days, because I haven’t had much time lately. It’s really hard to find the right balance between staying focused on the race and enjoying the moment, which was the greatest of my life so far. I was not sad when at the finish today, but mostly happy that it all happened.”

The highest-placed Australian overall has mostly been working as the last man for Simon Yates, but he's managed to keep a very respectable time on the general classification, following on for a similar performance for tenth overall at the Tour of the Alps.

“Today was a really hard start," said Schultz. It took a really long time for the breakaway to form then Tanel did a brilliant job in getting up the road which really took the pressure off the team.

"Through the middle part of the stage we focused on staying around Simon, then the final kilometres before the gravel finish, Mikel Nieve and I helped move Simon into good position to allow him to do his thing and race for the line. It was all in all a tough day but without problems on the gravel so that’s good to have it ticked off.”