Portland Timbers won the MLS Cup final for the first time in their history as they claimed a 2-1 victory over Columbus Crew in an error-strewn clash. 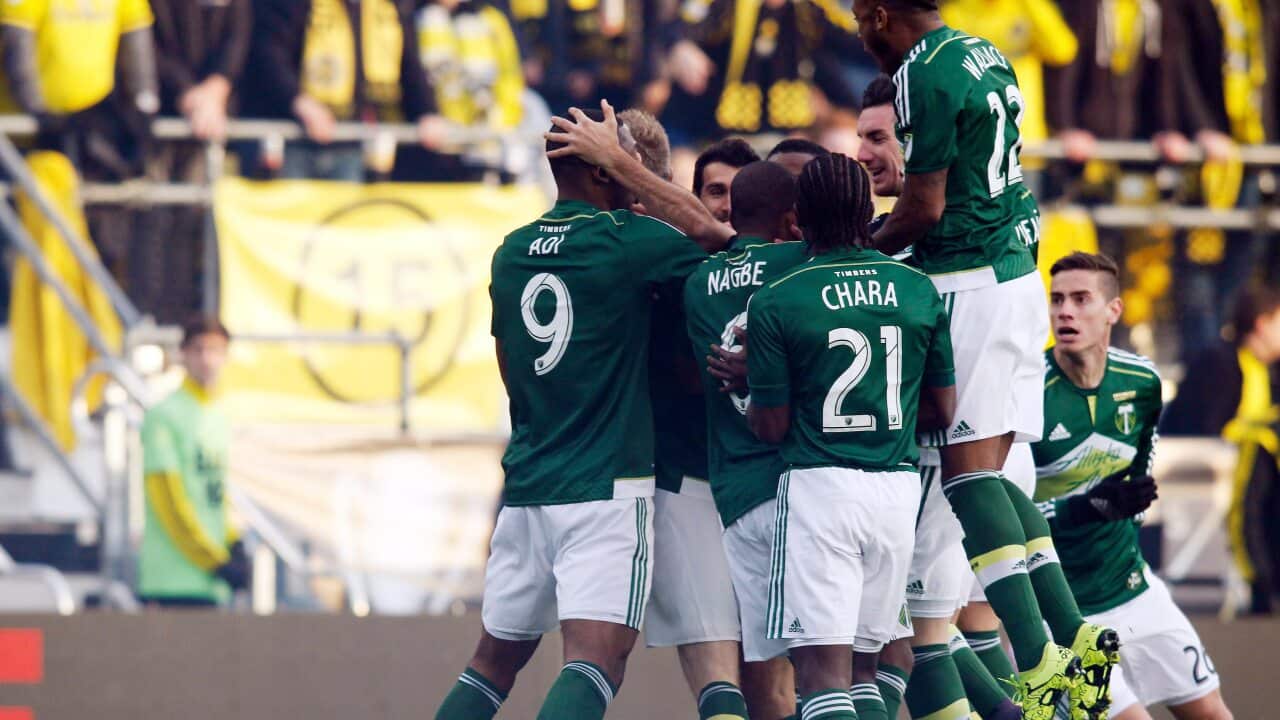 Portland Timbers players celebrate one of their goals in the MLS Cup final Source: AAP

The Oregon franchise, who only played their first MLS game four years ago, raced into a two-goal lead after just seven minutes having cashed in on goalkeeper Steve Clark's mishap inside 27 seconds and then benefited from a glaring error from the officials in the build-up to Rodney Wallace's second.

Kei Kamara pulled one back after a mad goalmouth scramble and although Portland hit the woodwork three times in the second half, their one-goal advantage proved to be enough.

Advertisement
Less than 30 seconds were on the clock when Diego Valeri broke the deadlock by capitalising on Clark's lax attitude.

The goalkeeper's touch behind him from a Michael Parkhurst backpass was loose and Valeri closed him down and slid in to divert the ball home as Clark attempted to clear.

Portland smelt blood and were soon 2-0 up when Wallace headed home in controversial fashion.

Alvas Powell clearly received a pass that had gone out of play and Tony Tchani paused expecting a whistle when the ball came back on to the field.

However, that was not forthcoming and Darlington Nagbe robbed him and set up an attack which culminated in Wallace directing his diving header into the far corner from Lucas Melano's cross.

The messy nature of the showpiece game continued when Crew pulled one back in the 18th minute through Kamara.

Timbers keeper Adam Kwarasey flapped at a routine punch and, although neither Kamara or Federico Higuain were able to stab the ball home at first, the latter pivoted and drilled the ball between Powell's legs on the line.

Clark then turned Fanendo Adi's shot into the side-netting as a barmy 45 minutes drew to a close.

It was Portland who created the better chances in the second period and a slice of fortune and the woodwork twice saved Columbus in quick succession.

Parkhurst originally stopped a corner on the line before Kamara shanked a clearance against the crossbar, with the ball coming down and hitting Parkhurst's arm, then the post, before the Crew's captain eventually removed the danger.

Portland would then strike the post again through Adi's header, with Clark almost fumbling the rebound into his own net in another gaffe.

Clark at least kept his team in it by using both of his legs to keep out Nat Borchers's header on the line and then brilliantly pushing Adi's shot over, but it was his original error that led to his own team's downfall, and Portland's historic success.