Good football not enough for Croatia at EURO 2016

For 87 minutes, the game was in Croatia’s control. Despite the Czech Republic’s forays forward, there was a growing sense of desperation, as numbers committed past the halfway line. Then, football became secondary. 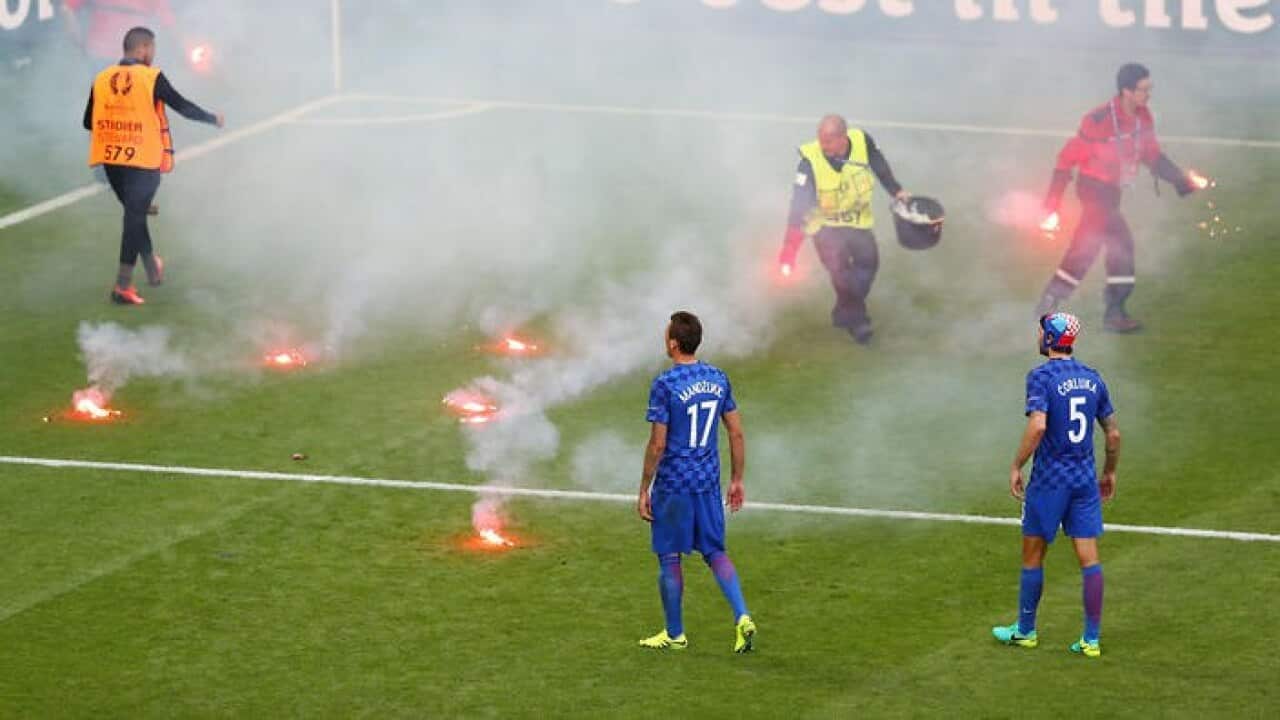 Captain Darijo Srna and goalkeeper coach Marijan Mrmic’s motivations for staying in camp, after both their fathers had passed away during the week, disappeared in the haze of flare smoke.

Post-match, a visibly irate Ivan Perisic spoke in frustration on HRT, the state broadcaster, not of the fact Croatia let a 2-0 lead slip, but the sheer futility of the players’ efforts.

“I feel miserable. Maybe it’s better we don’t play at all, instead of shaming our nation, because of a few people,” he said.

Advertisement
Both against Turkey and the Czech Republic, Luka Modric and Ivan Rakitic’s ability to change the game’s tempo with a single pass as Milan Badelj broke down opposition play, relieved the pressure on Vedran Corluka and Domagoj Vida to that point.

It also allowed the likes of Perisic, Marcelo Brozovic and Mario Mandzukic to attack in transition as Croatia won the ball higher up the park.

From a footballing perspective, the Vatreni arguably held the most talented and balanced squad it has had in nearly two decades, and had a legitimate chance to go deep into the tournament.

Off the field however, there has been hysteria, controversy and accusations of corruption at every turn, and the barrage of flares that burned beside Petr Cech’s goal in Saint Etienne were the mere embers of a self-fulfilling prophecy.

Despite the fact Croatia currently sits on four points in Group D and effectively secured qualification to the Round of 16 with the 2-2 draw, any momentum Croatia had has been seemingly scorched.

In the lead-up to Saturday morning’s match, reports from Sportske Novosti and various other Croatian outlets warned of such an incident, with the very intention of hurting the Croatian Football Federation (HNS).

UEFA and French authorities’ inability to pre-emptively act on these reports which the HNS relayed, take on a minor importance, in the face of an alleged hegemony consuming Croatian football.

Similarly to Saturday morning’s ghastly events, fan scuffles with police at the San Siro in November 2014, along with imprinting a swastika on the Poljud turf, when Croatia and Italy met again during the Euro 2016 qualifying phase, were initiated to provoke punishment.

The intent of this sabotage was to incite such an outrage, UEFA has no option but to punish HNS and the National Team, which they see as a mere extension of Mamic’s hegemony, financially and through competitive banishment.

However, as Slaven Bilic suggested immediately post-match for ITV, disenchantment with Croatian fans is not exclusive to a North-South divide.

In December 2013, while Dinamo’s supporters group, the Bad Blue Boys, was in the midst of a boycott, they stood together with Torcida in protest as Hajduk took on Dinamo in the Prva Liga, which the Plavi have won with growing comfort since 2005-06.

UEFA fined the HNS $152,000 and ruled two home matches to be played behind closed doors for the Poljud embarrassment, and the Croatian federation’s response to fan misconduct for away matches, took on a more organised tact.

For both matches away to Azerbaijan and Norway, the HNS collaborated with AFFA and NFF along with police, to implement red zones outside the respective stadiums in Baku and Oslo.

Eviction orders to prevent any fans with Croatian colours from entering the prohibited radius
resulted in numerous arrests.

Fears remained that it would only delay the inevitable, and with this in mind, the arguable potential for a global platform at Euro 2016 only added incentive for those rebelling.

Izagola.hr, a popular Croatian fan page on Facebook meaning Behind the Goals, displayed support after Saturday’s disgusting acts, which undoubtedly altered the course of the match.

A post, since deleted, displayed Mamic hanging from the top of the Eiffel Tower.

A video remains of a flare display at a Vatreni match in 1995, applauded by those in attendance including former President Franjo Tudman, with the sarcastic caption, “Once impressive, now an embarrassment.”

Allegations of embedded corruption in perspective, the question still remains: do the ends justify the means?

While attention towards these issues has no doubt been raised since the match, the counter-productive and downright primitive actions by those involved in Saint Etienne, would only give who they dread added ammunition to consolidate power.

The sheer lack of logic here is astounding.

Yet, I return to Srna’s tears during the playing of the Croatian national anthem pre-match, and how they now take on a much more ominous context.

His father Uzeir’s funeral in Metkovic was on Monday, and he returned to Croatia’s camp in Deauville on Wednesday, determined and ultimately proud to represent his country.

His desire and effort throughout the match, tirelessly running up and down the right flank, galvanised the rest of the team.

The images then were genuinely distressing, as he stood hopelessly in front of Croatian end when play was stopped, pleading for them to desist.

All the while, there was a growing sense his valiant effort was in vain.

“They are not really Croatia supporters. These people are scary and I call them hooligans,” Croatian coach Ante Cacic said post-match.

“These are sports terrorists. I hope they can be identified and punished.”

Identification, and eventual punishment is one thing.

While the cloud that covers Croatian football looks unlikely to clear, however, the terror will continue.