Got the Goodes: AFL legend switches to soccer 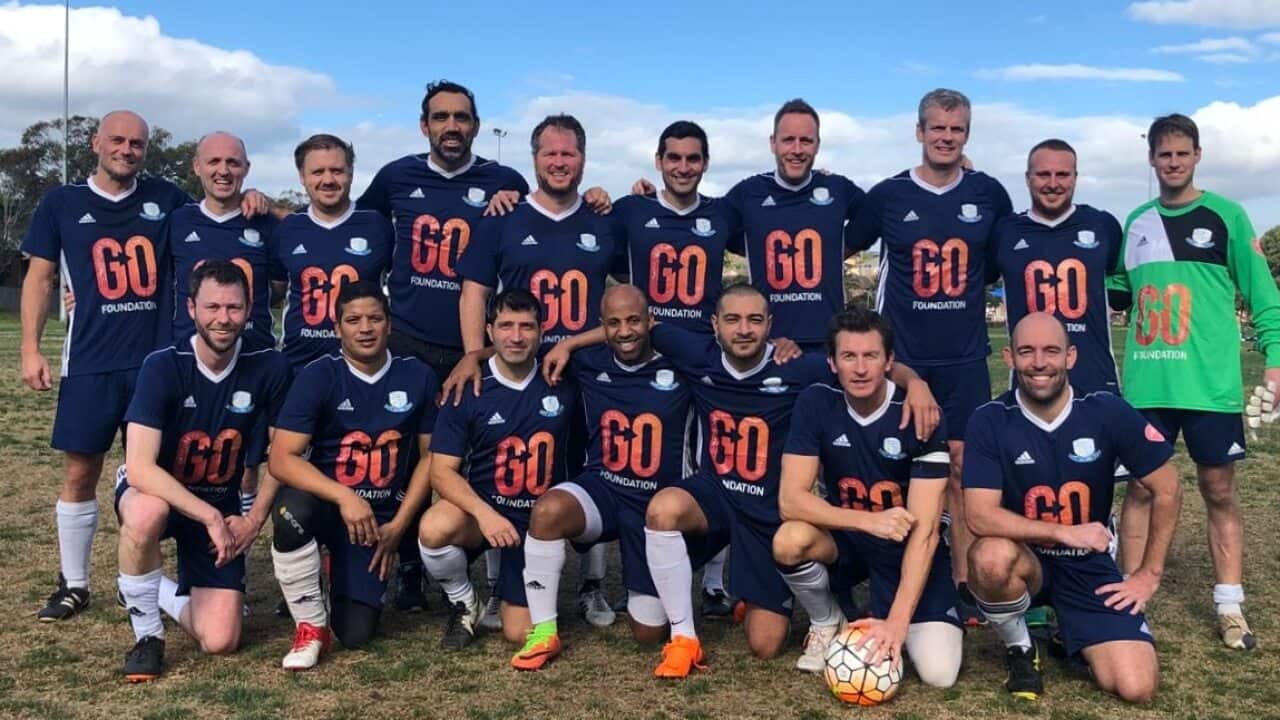 The dual Brownlow medallist and two-time AFL premiership-winner just completed his debut season as a forward with Waverley Old Boys FC’s over-35 side.

Goodes has gone from the life of an elite professional athlete to playing with the Eastern Suburbs division two battlers on local parks with no crowd, no changing rooms and having to pay to play.

Advertisement
But he tells The World Game: “It’s just the way I like it. To be just like everyone else is refreshing.”

These words also ring true in regard to how he joined the Sydney club, as just like everyone else he simply emailed them expressing his interest, not pointing out who he was and not expecting any special treatment.

“We got an email from someone saying they’d played a bit of six-a-side soccer and they wanted to stretch their legs a bit on a bigger field,” player manager Andy Dorey recalled.

“I recognised the name Adam Goodes and thought: ‘that’s interesting, I wonder if it’s actually the Adam Goodes?’

“I did a quick Google search of the email address and saw it was linked to his agent’s website, so I thought: ‘this may be the real deal, this is actually the Australian sporting legend and Australian of the Year Adam Goodes.

“But I still didn’t quite believe it until he actually turned up the following weekend at a pre-season kick about.”

Waverley Old Boys were thrilled at having a genuine Aussie sports legend on board – but even they couldn’t have anticipated quite the impact he would have.

Goodes hung up his boots in 2015 after 18 years at the Sydney Swans.

He says he’s “absolutely loving” life after AFL but admits he missed being in a team environment.

“That’s the only thing I miss from playing to be honest,” he said.

“Being in a team is something I have always done. I like playing my role for the team and the banter that comes with team sport.”

So looking for a way to keep fit and eager to once again be part of a sporting group, the AFL legend decided to give soccer a go.

But far from being a random code switch, this was a long-awaited return to the sport he grew up playing.

Goodes, a huge Manchester United supporter who also loves Lionel Messi, played the round-ball game as a kid and would have continued playing if it weren’t for a fateful move.

“I only played AFL because we moved to a small country town in Victoria and there was no soccer club for me to play for so I tried AFL,” he reveals.

“I knew I was always going to play soccer again because the love for the game has never left me.”

Despite being vastly different sports, Goodes says there are several skills that translate across from AFL.

But having not played full-pitch soccer in decades he had no expectation about his ability.

He needn’t have worried.

Goodes scored four goals in the first game of the season and netted many more as he terrorised the opposition from the wing and up front.

The ultra fitness he gained playing AFL, which he says is by far the more physically demanding of both codes, was also a major advantage in a league where most players are there just as much for the beers and the banter.

“In the AFL we played for two hours and it was high intensity running for that time,” he said.

“I find plenty of time now playing soccer to have some good rest on the wing.

“I love to play in space, use my height at set plays to win the ball.

“I like to use my fitness to get back and defend and then press forward.”

Goodes was on track for a stellar maiden campaign before it was cruelly cut short by his first ever hamstring injury, restricting him to just seven games.

Towering above most players on the pitch, his sheer size and physicality made him a force to be reckoned with.

This also meant that as much as he hoped to just blend in and be incognito, opposition players and referees couldn’t help but notice him and be taken aback when realising they were about to face one of the county’s greatest sportsmen.

But he says that didn’t mean he had a target on his back.

“There have been a few raised eyebrows at the start of the game,” he laughs.

“But it’s over-35s, so all the players love the game and play fair and hard to win.

“I haven’t been targeted at all, plus I’m big enough and ugly enough to look after myself,” he jokes.

Despite his lack of game time, Goodes still had a major impact on the side.

In a gesture to their new teammate the club decided to back the GO Foundation - co-founded by Goodes and fellow former Swans player Michael O’Loughlin which focuses on education in Indigenous communities - by putting the logo on their shirts.

“He is such an authentic and genuine guy, very humble and he’s come along and just treated everyone with such humility and respect,” Dorey said.

“He’s just a super nice, down-to-earth guy and just settled in with the group right away. There was just zero ego.

“So it really just gave us a major boost and got everyone really geed up about the season and made everyone want to lift.”

Fully recovered from his injury, Goodes is already looking forward to next season with the Old Boys.

And while he admits his former AFL teammates “think it’s hilarious” that he’s playing amateur soccer, he reveals some of them may even follow suit.

“I am looking forward to being fitter for next year,” he said.

“Hopefully more goals and wins to come for the Old Boys.

“You might even see some more Swans old boys next season.”