243 riders lined up for the first edition of the MARS Australian Gran Fondo Championships, staged on the same route the elite riders would later battle on for road nationals titles. 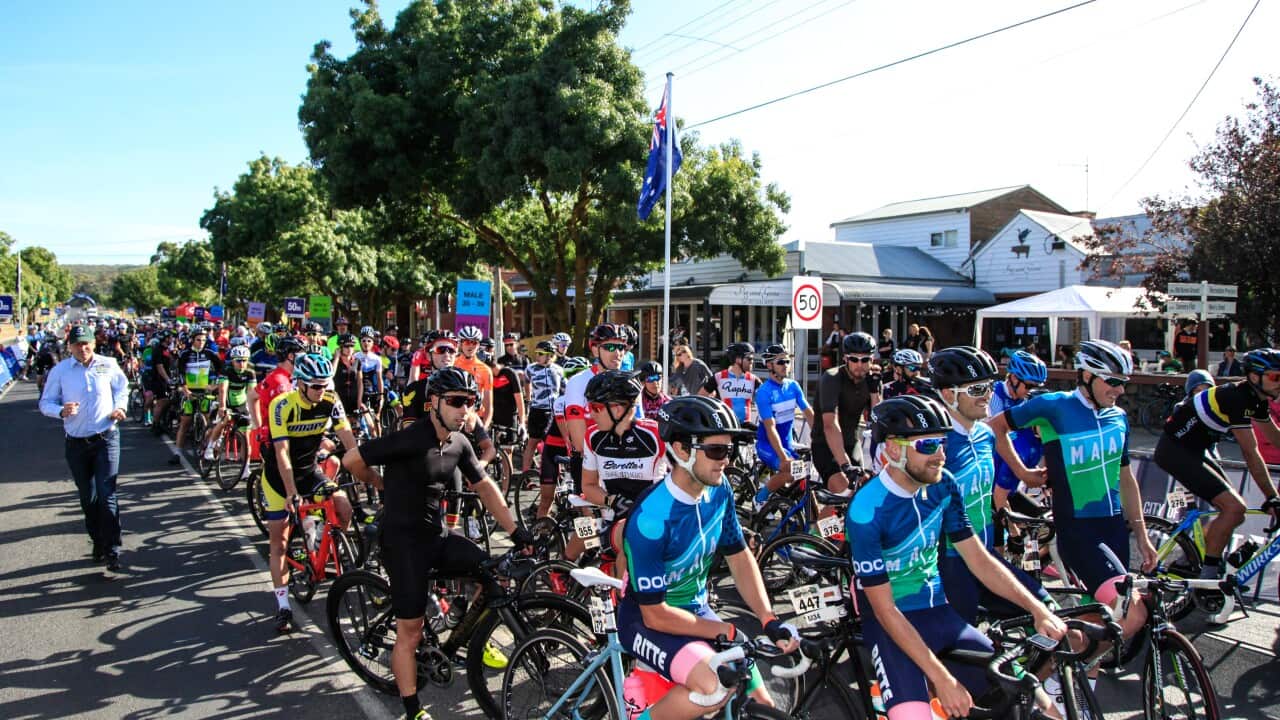 243 riders lined up for the first edition of the MARS Australian Gran Fondo Championships, staged on the same route the elite riders battle on for road nationals titles (JPX Photography) Source: JPX Photography

It was a fun atmosphere on the start line, all part of enjoying the festival of cycling in Ballarat, Nick Green, CEO, Cycling Australia, told Cycling Central.

“It’s an exciting opportunity for all the club racers and all the recreational riders like myself," he said.

"To ride the exact same roads on a closed course that the elite men and women will ride, it’s just a great opportunity.

The idea is they ride the hill and find out how challenging it is, then the next day they come and watch the pros and how they glide up the hill and just make it look so easy.

They can experience each hill and each turn and appreciate what’s going on during the race," he said.

The turnout would have been lower than Cycling Australia expected to showcase their expanded calendar of Gran Fondo rides to accompany elite events.

"We introduced it rather late, in terms of marketing and selling it, so we’re just keeping it low to work out what we need to do for year two and future years, where it will be getting bigger and bigger,” Nick Green said.

Cam McFarlane from the Brunswick Cycling Club set himself up near the start with a bunch of vocal spectators cheering on the riders.

“You’re racing like the big boys, it’s the dream. We come up here every year, and we’ve got a few people up here for the first ever Gran Fondo championships, so what better way to start the weekend, than to come up and give them a cheer?" he said.

"We’ve got a few waves and smiles from riders so far, everyone looks to be having fun out here. Every minute of the day is terrific up here, it really is, even these guys they’re out there having a crack, they’re doing better than me, I’m standing here, and they’re riding their bikes,” he said

Roger Boyce, 56, travelled up from Melbourne to do the closest thing to a race he’s competed in although he does a lot of riding.

“It’s great to get around and have a look at the course. It’s good to see what they (the elite riders) do, you can work out how much faster they are than we are. There’s a mate of mine in the group in front so I’ll definitely have to catch him.”

Winner of the 19-34 age category was Nick Squillari, formerly of Seight Pro Cycling and 9th in the elite mens time trial two days prior.

“The hill always hurts, thank god it was a headwind. Whether it’s the elite race or the Fondo the hurt is the same. It’s a good thing for those that want the experience of the elite race, and in that regard Cycling Australia has really hit the nail on the head.

Seven laps is a good length for my age group, nearly two hours race time, and you shake out any guys that are just trying to sit a wheel. It’s good, I get to do this and hurt a bit with my mates, then sit on the hill tomorrow, with the BBQ and a drink and enjoy the day," he said.

Plenty of stars were present in the peloton, including Rochelle Gilmore, an important figure in Australian women's cycling.

"I think it's great getting spectators out to the event and experiencing it for themselves rather than sitting at home and watching on TV. They do it in Europe and it’s proved to be hugely successful there.” she said.

Cycling commentator Matt Keenan bragged on social media about his preparation for an assault on the nationals circuit, tweeting his training rides. Lined up at the start, he was a little nervous.

“This is the first time I’ve pinned on a number on since 1999, and it’s the 20th anniversary since I last raced the national championships when it was in Sydney. I finished sixth then, I won’t be finishing sixth today.”

With the first experiment of the Road Nationals Gran Fondo now completed, time will tell if these events catch on across the entire Australian season and bring the crowds out to the racing.

“If you look at Amy Gillet’s Gran Fondo, with the women’s NRS event there afterwards, it’s absolutely the future of cycling in Australia,” Keenan said