Green Gully coach Arthur Papas said he and the Victorian NPL club were enjoying being the centre of the football universe – at least for a day – after their team came back from the dead to knock A-League side Central Coast Mariners out of the FFA Cup. 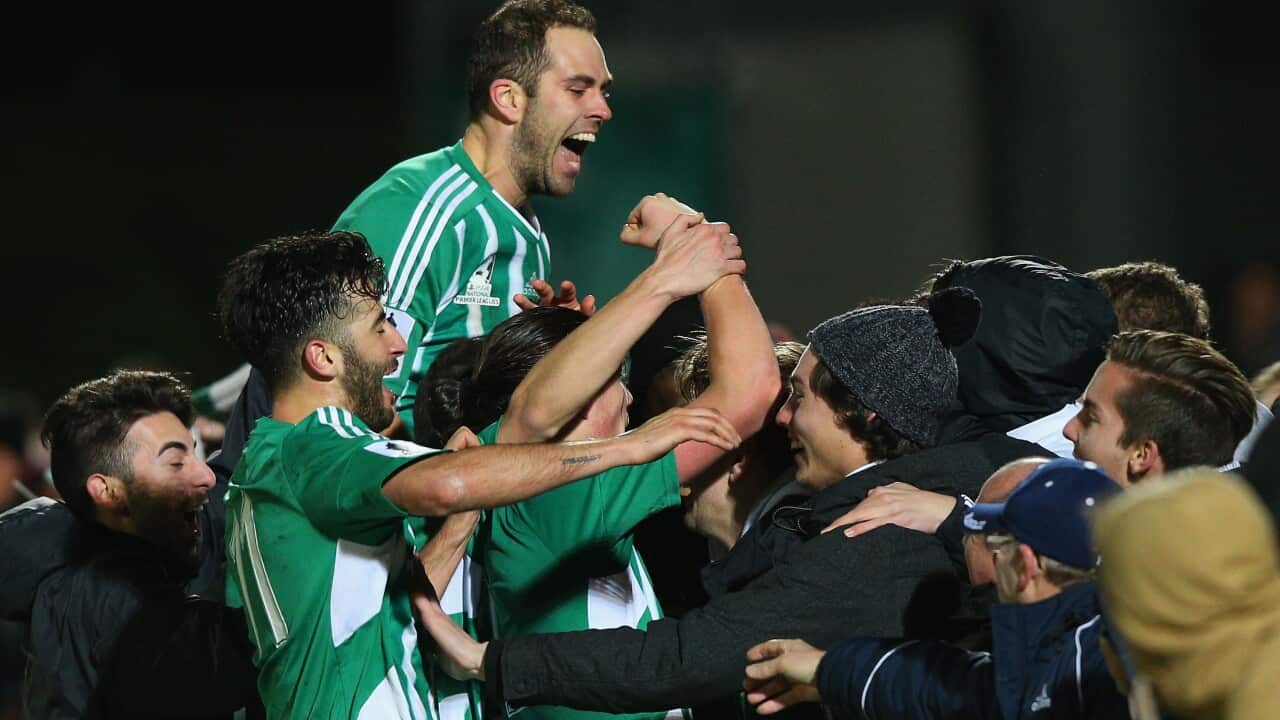 It looked like Mariners were going to hold on for a 1-0 win in the round of 32 match at Green Gully Reserve on Tuesday night, until a late goal from Daniel Jones, in the 85th minute, and a late, late goal from Liam Boland, in the second minute of added time, turned the game on its head.

Advertisement
On Wednesday, Papas was still reveling in the result when he talked to The World Game about his team’s 2-1 win and the celebrations afterwards.

“Oh mate, I haven’t been off the phone today to be honest, it’s been non-stop, but it’s great, it’s great,” he said.

“It’s fantastic for all of us at the club to get so much support. It’s good to catch up with a few friends who were messaging me last night – I’ve been getting back to all of them this morning.”

Papas said you couldn’t dream up a script for an NPL side to come from behind and beat an A-League team, deep in the match.

Green Gully are only the second non-A-League side to beat an A-League team in the FFA Cup. Adelaide City beat Western Sydney Wanderers 1-0 in the round of 32 in the first year of the cup – 2014.

“This is what makes the FFA Cup so popular,” Papas said. “Yeah, absolutely, you couldn’t make up a story like the one that happened last night.

“The fact we went behind early and that made it very difficult and then it was getting late in the game and we were still behind, but the spirit and determination of the team to go on and win it right at the end was unbelievable.

“It was pandemonium in the dressing-room afterwards. Everyone celebrated on the field and in the crowd and then in the room.

“We had a lot of our junior players in there, which we always try to do after a win anywhere, get them in there and sing the song with us, and I don’t think we’ve ever sung it that loud before. Yeah, our players were fantastic last night.”

So you’re declaring Green Gully the centre of the football universe, at least for a day?

“Yeah, for sure,” Papas said. “I’ve got to head in to the club now to do a bunch of interviews. It’s the best coverage we’ve had for a while and it’s fantastic because it puts the club back on the map on the national stage.

“A club that has been so successful, but when you talk national success it’s never had a night like that. Just a magic night for the club.

“By then it becomes much more difficult if you’re playing an A-League club.

“Look, credit to the Mariners, they put in as well and both teams had a real crack at it and we got our rewards in the end.”

There was controversy surrounding Green Gully’s first goal, when a shot from Jones took a deflection off Boland and went into the net. Boland appeared well offside, but claims from Mariners players to the match officials were ignored.

“I’ve just watched a replay of it now,” Papas said. “Yeah, to me it looks like interference so it could be called offside, but these are things that happen in a game.

“But we put ourselves in position for something to happen and calls like this can be contentious, but it’s only because the guys believed they could get back in the game and they forced their way down there.

“We’ve had calls go against us this year and we’ll have more calls go against us and some for us. We’ll take this one and enjoy it. The bottom line is we don’t make the decisions, but we want to put ourselves in a position in the goalmouth where we’re trying to score.

“We were willing to do anything to get back in the game and I guess sometimes things go your way when you have the right spirit.”

The winner was a super, left-foot strike from about 40 metres out by Boland, who caught Mariners goalkeeper Ivan Necevski off his line.

“Oh, I mean, I saw a cracker of a long-range goal from Danny Choi for Blacktown City last week, but the timing of this strike and the fact it was deep into added time, I mean, credit to Liam for even trying something like that.

“It’s one of the best goals I’ve seen at any level.”