Hibernian's 114-year wait to win the Scottish Cup is over after skipper David Gray headed in a stoppage-time winner to beat Rangers 3-2 at Hampden Park. 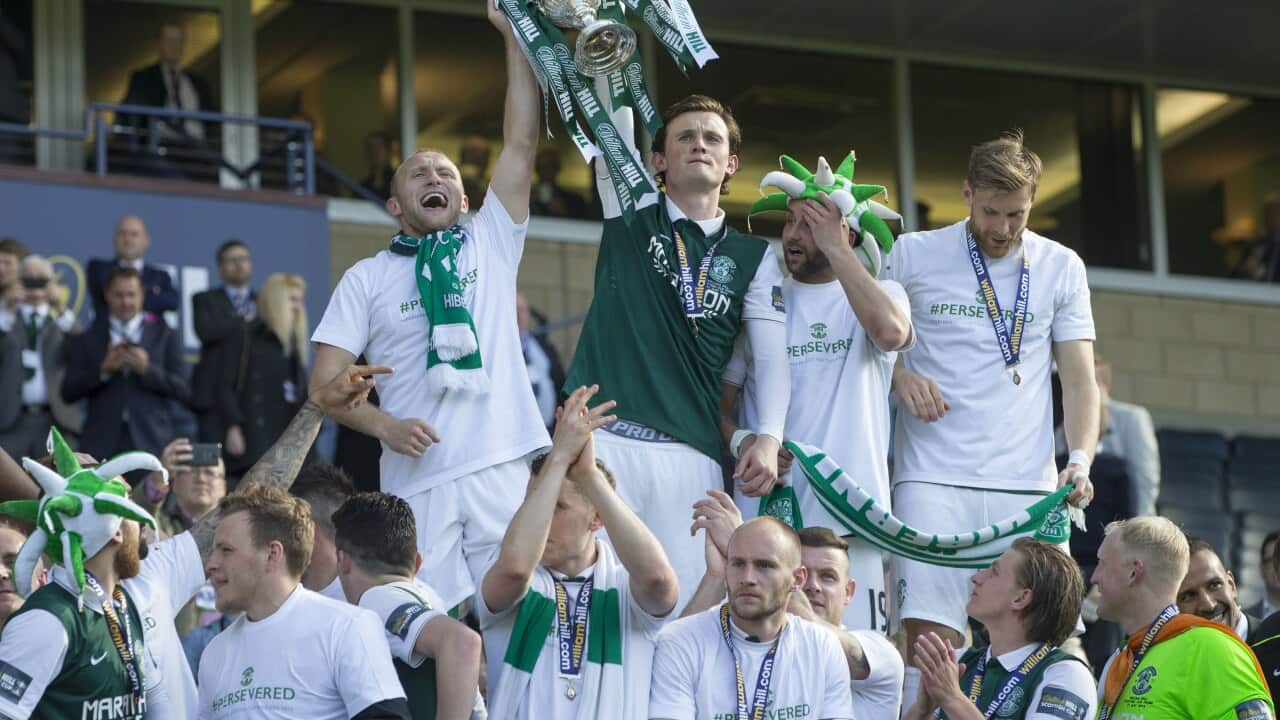 Anthony Stokes, on-loan from Celtic, opened the scoring for Hibs in the third minute and the Easter Road side threatened to increase their lead before Kenny Miller equalised in the 27th minute with a header.

Stokes hit the post with a drive a minute later before Miller headed against the crossbar but there was little doubt the Light Blues were the happier with the interval scoreline.

However, in the 64th minute Gers midfielder Andy Halliday hammered the ball past Hibs keeper Conrad Logan from 20 yards before Stokes headed in from a Liam Henderson corner to make it 2-2.

In the second minute of stoppage time Gray headed in another Henderson corner to send the Hibees fans wild with delight with the trophy on its way to the Leith for the first time since 1902.

The end to Hib's hoodoo meant they also became first lower league club to win the trophy since East Fife in 1938 and it sparked a pitch invasion from Easter Road supporters at the end of the match which encouraged Gers fans to come on as well.

Mark Warburton named only 16 players, as he had done in the semi-final against Celtic, while Alan Stubbs, with a much larger squad, opted for a front pairing of Jason Cummings and Stokes.

And it was the Easter Road strike duo who combined to give the Leith side the early lead.

With the Rangers defence sleeping, Cummings sent Stokes down the left channel and he cantered into the box with right-back James Tavernier trailing and with Rob Kiernan standing off, he slipped the ball past keeper Wes Foderinghan at the far post.

It was a goal of stunning simplicity and minutes later the shaky Kiernan was turned easily in the box by Cummings but defender Danny Wilson blocked the shot.

The Ibrox side looked disjointed but found themselves level when Miller beat Leith defender Darren McGregor to a Tavernier cross to bullet a header past Logan.

Moments later, with the Gers fans still celebrating, Stokes took a McGinn pass and drove a 25-yards shot off the inside of the post with the ball rebounding wide.

But Rangers had shrugged off earlier nerves and in the 32nd minute Miller's header from a Barrie McKay corner cannoned off the crossbar.

It was turning into a thrilling final, the first between two second-tier clubs.

With five minutes of the first half remaining Foderingham made a fine save from Stokes and then from Cummings following the resultant corner before Stokes heads wide from Gray's cross.

The Republic of Ireland forward drew another good save from Foderingham with a powerful drive from 25 yards in the 50th minute but the Govan men survived the corner.

However, it had turned into a more even contest but in turned in favour of the Championship winners in the 64th minute when, from 22 yards out, Halliday arrowed a shot past Logan.

Hibs looked demoralised as Rangers took control but there was another twist on its way.

Stokes blazed a shot over the bar in the 76th minute but three minutes later he was more accurate when he escaped the attention of Tavernier to head in a corner from substitute Liam Henderson, on for Liam Fontaine.