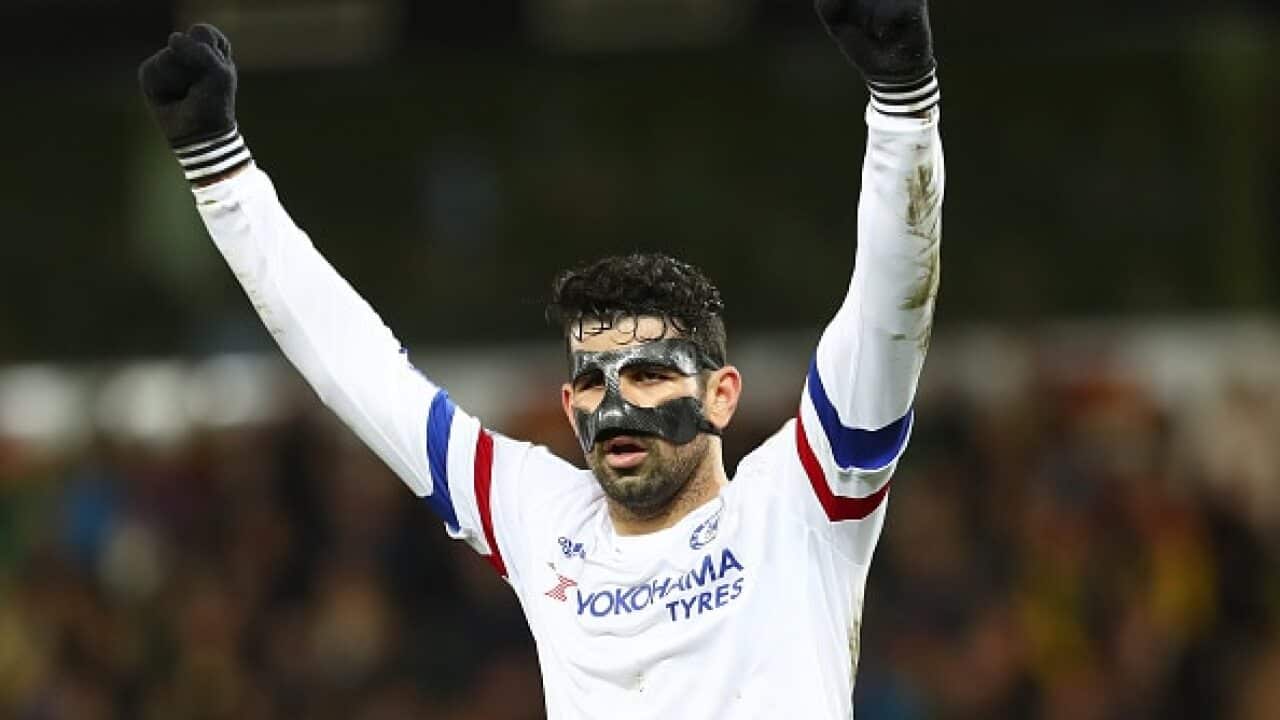 PSG's social media team upped the ante on the eve of the tie with a video montage of masked super heroes titled 'Spot the fraud', which also included Costa, who has been playing with a protective mask due to a broken nose.

Advertisement
PSG boss Laurent Blanc warned his players to watch out for arch-antagonist Costa, who has scored 10 goals in 14 games under Hiddink, but has just one Champions League goal in two seasons and 14 games with the Blues.

Costa, available after missing last Saturday's draw with Stoke as a precaution over a minor tendon problem, has a reputation for riling opponents. He has never been sent off for Chelsea, although he has served two retrospective three-match domestic bans in his two seasons in London.

"I'm very proud of him the way he's playing and, going not over the edge, but he likes to fight in the real way of the game," Hiddink said.

"That's what we like. I protect him and support him when he's doing what he has done in my period at Chelsea.

"He scored recently in not the worst league in the world. In the Premier League he frequently is scoring now, since December, January.

"Before he had also this problem not scoring, as did the team. Let's see and hope he can make it to the European level as well."

Hiddink, who is without captain John Terry due to a hamstring injury, also issued a robust defence of Eden Hazard.

The Belgium playmaker, Chelsea's leading performer in last season's Premier League and Capital One Cup double, has been underwhelming this term.

Hazard on the eve of the first leg suggested a move to PSG would be too good an opportunity to turn down, stoking speculation he is angling for a move this summer.

And he was substituted in the 2-1 loss at Parc des Princes, but Hiddink attributed that to his return from a groin injury.

"At that time when he was playing away in Paris he was in that period just coming back from a rather severe injury," Hiddink said.

"We could not ask him to be game fit at that moment. He had two or three actions that looked like Hazard.

"We are some weeks further into the league and game fitness. He can and must show tomorrow what he is capable of, which is more than the away game."

The Blues are up against PSG for a third-straight season. Chelsea won the quarter-final tie in 2014 on away goals, but were defeated at the last-16 stage in 2015 by the same method.

Zlatan Ibrahimovic will be determined to make an impression after missing the 2014 tie through injury and his first-half dismissal 12 months ago.

"Revenge? I don't know. For him it was unfortunate last time round, but for his team it was positive because they went through," Chelsea defender Gary Cahill said.

"He's very vocal on the pitch. He does like the sound of his own voice, but he deserves respect because he's a top player and we have to look out for him."

Chelsea's only defeat since the appointment of Hiddink as interim successor to the sacked Jose Mourinho was in Paris on February 15, but John Obi Mikel's vital away goal leaves the tie finely poised.

After guiding Chelsea up the Premier League and into Saturday's FA Cup quarter-final at Everton, Hiddink has lofty targets.

"The team responded, got the points, is now mid-table in the Premier League. This was a target, a soft target by Chelsea's standards," Hiddink said.

"We'd like to go to a new target which must be FA Cup and Champions League. It can give another image to Chelsea (this season)."