Guus Hiddink has edged towards a second stint as interim manager at Chelsea after holding talks with Stamford Bridge bosses. 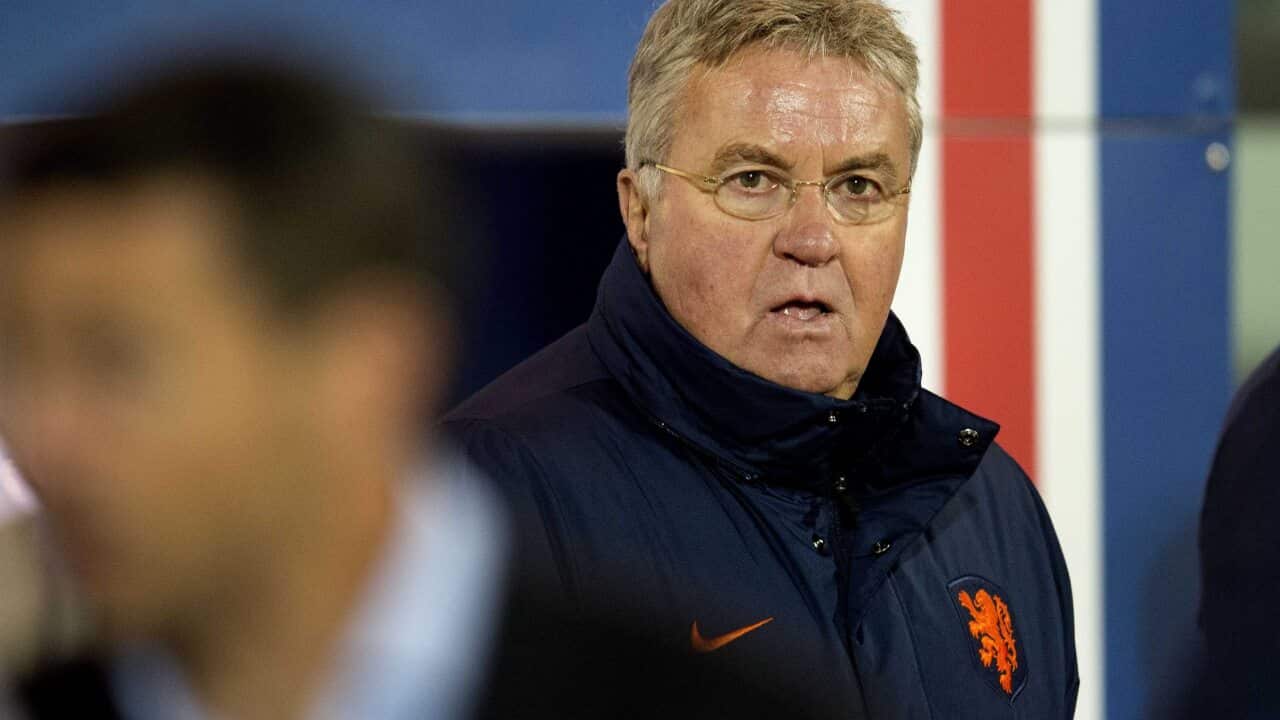 Guus Hiddink is in talks with Chelsea Source: AAP

READ MORE
EXCLUSIVE: How hot favourite Hiddink has been holding out for Chelsea job

The 69-year-old arrived in London on Friday to meet with Chelsea chiefs over a short-term role to replace Jose Mourinho.

Hiddink told Dutch newspaper De Telegraaf he would listen to Chelsea's proposals before deciding whether to return to the club he coached to the FA Cup title in 2009.

"I want to get some good insight before I make my decision," said Hiddink.

"I want as much information as possible.

"Chelsea are in a bad situation and there are reasons for that.

"Whether or not I'm visiting their next match depends on my first conversation.

"Then I'll decide if I should stay in London longer."

Mourinho left his Chelsea post on Thursday, just seven months on from guiding the Blues to the Premier League title but also after suffering nine defeats in 16 league matches this term.

Hiddink would appear to be Chelsea's preferred caretaker appointment while the likes of Pep Guardiola, Diego Simeone and Antonio Conte are reported to be potential long-term successors to Mourinho.

Hiddink pledged to hear Chelsea's offer in full before deciding whether to accept the challenge, suggesting first team coach Steve Holland could take charge of this weekend's Premier League clash with Sunderland at Stamford Bridge.

Well-travelled Hiddink is viewed as the perfect antidote to the dressing-room discontent that has coincided with Chelsea's decline from defending champions into relegation battlers.

Chelsea insisted Mourinho's Thursday afternoon exit was by 'mutual consent', only for technical director Michael Emenalo to then cite 'palpable discord' between the manager and the players for the 52-year-old's departure.

Thank You doesn't seem enough Sad sad day Gonna miss you Boss The Very Best I have EVER worked with, unbelievable memories together

Hiddink stepped into the Stamford Bridge breach after Luiz Felipe Scolari's sacking in 2009, and should now reprise that role.

Chelsea's former assistant manager Ray Wilkins branded Hiddink 'absolutely perfect' to step in and arrest the Blues' slump between now and the end of the season.

"As an interim manager, he would love the challenge, I'm sure," Wilkins said on talkSPORT.

"He would be the one person I would say would be absolutely perfect to come in to the end of the season and straighten them out."

Chelsea released a glowing statement on Mourinho's departure, only for technical director Emenalo to temper that sentiment.

"Whilst there is huge sentiment for the individual who has done so much for the club, the fact of the matter remains that Chelsea Football Club is in trouble," Emenalo told Chelsea TV.

"There obviously seems to be palpable discord between manager and players, and we feel it was time to act.

"The owner is forced to make what was a very tough decision for the good of the club.

"Anyone who loves the club, who has any kind of affiliation to the club, can understand that this club is in trouble, and something needed to be done."

The messy departure of Dr Eva Carneiro, who is involved in a legal dispute with the club after being branded 'naive' by Mourinho in August, has been another negative stain on Chelsea's season.

Former Arsenal midfielder Cesc Fabregas was forced to fend off rumours he had led dressing-room revolts against Mourinho earlier in the season.

Now Emenalo has further backed Chelsea's players, insisting none of the Stamford Bridge squad had any part to play in Mourinho's exit - which it has also emerged did not see him leave Cobham under a hood on Thursday night, as had been initially thought.