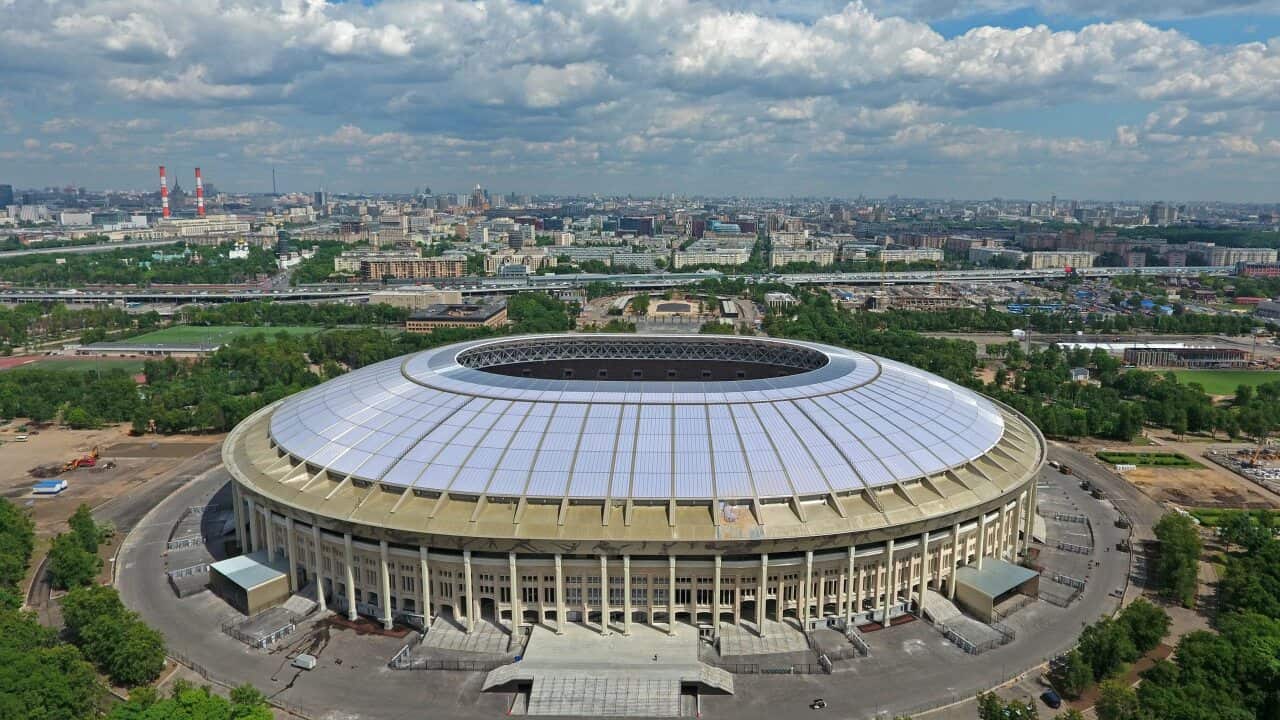 Advertisement
Luzhniki Stadium was originally built on the bank of the Moskva River opposite the Vorobyovy Gory landmark in 1956. Until 1991, it used to be known as the Lenin Central Stadium. It has been the Soviet Union’s and Russia’s largest stadium with a capacity of up to 101,000 seats.

The stadium hosted both the opening and the closing ceremonies of the 1980 Summer Olympics, the first Olympic Games in the country’s history.

In 1996-1997, the stadium got an upgrade and a complete roof, earning a 5-star ranking from UEFA and the right to host the UEFA Cup final in 1999 and the UEFA Champions League final in 2008.

As part of the reconstruction, the stands were moved closer to the pitch following the removal of the athletics track, the pitch itself was replaced with the natural grass surface, and the angle of the now two-tier stands was changed, while the roof became larger by 14 m and now boasts a 30,000 sq m LED screen. There are two 16.8x9.6 m media screens facing each other, one in the South and one in the North section of the stands, clearly visible from any seat. There are now four restaurants and over 200 food stands.

The sports complex area totals over 159 hectares while the stadium’s entire post-reconstruction area including the stands is 221,000 sq m.

In the 2016/17 season, Spartak Stadium was a venue with the highest attendance figures in Russia, with an average 31,000 fans coming to each match.

The square outside the stadium is the site of a monument to a gladiator, considered to be a symbol of FC Spartak, the stadium’s home team.

Stadium construction revived plans to open a metro station nearby, a project put on hold 40 year ago. Spartak is the second metro station that carries the name of a football club, the other one being Dynamo.

Moscow is the capital of Russia, the largest city in the country and in Europe and one of the political and business centres in the world. Red Square, Saint Basil’s Cathedral and the Kremlin, the official residence of the Russian President, constitute the historical centre of the city. Moscow is home to the world renowned Bolshoi Theatre, Tretyakov Gallery and Pushkin State Museum of Fine Arts that houses a large collection of paintings and sculptures.

Moscow Metro is one of the world’s most beautiful underground networks and a prominent city attraction. Some of its stations are part of UNESCO cultural heritage list. ‘Music in Metro’ concerts are held on 15 metro stations and 4 stations of the Moscow Central Circle rail road.

36 next-generation Moskva trains run on the Tagansko-Krasnopresnenskaya line, the busiest on the Moscow Metro. The same line has a station called Spartak standing next to the eponymous stadium that will host 2018 FIFA World Cup™ matches. The new trains have dedicated room for people with wheelchairs, broad doors and USB charging stations.

All the newly built metro stations and the stations of the Moscow Central Circle rail road are adapted to the needs of low mobility groups, with ramps, elevators and stair-lifts.

The municipal bike rent network has 380 dock stations and 3,600+ bikes. In 2017, Muscovites and city guests did almost 2.4 million rides.