When The World Game broke the story that Bobo would become the marquee signing for Sydney FC in 2016, the public reaction was far from mass hysteria. 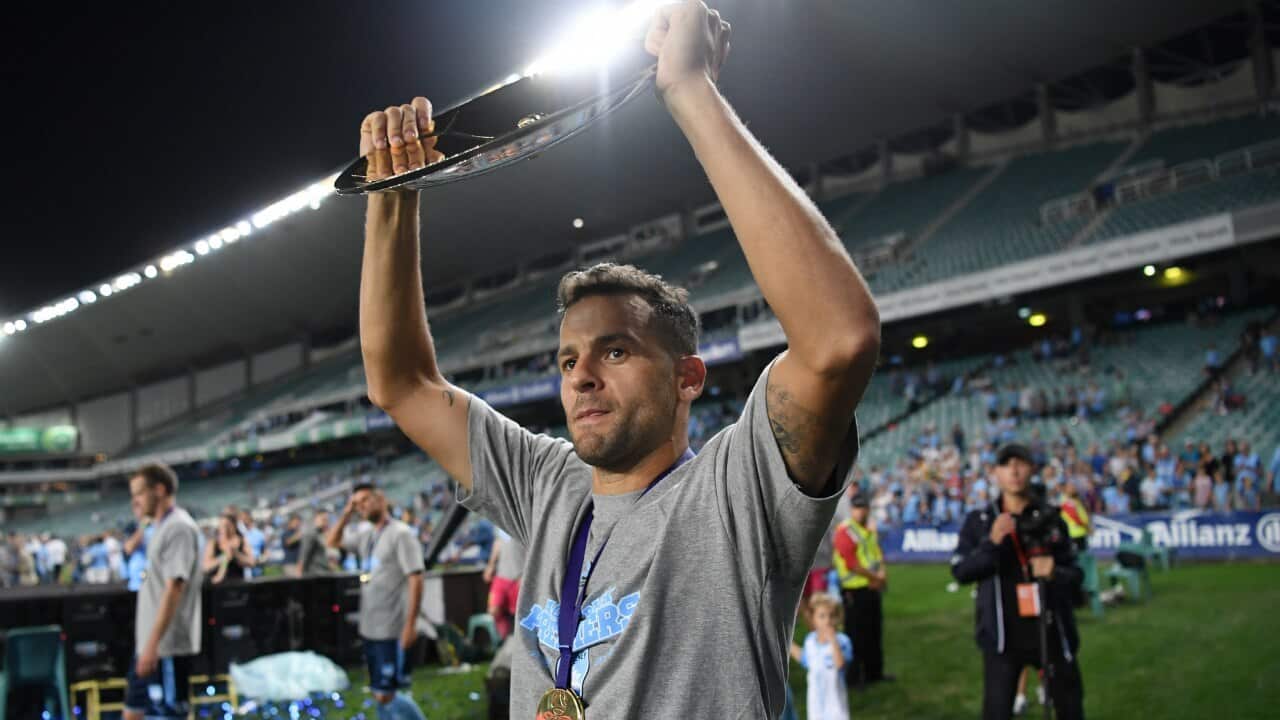 Curious fans headed to Google and YouTube to search for every skerrick of information about the mystery man.

His statistical pages revealed a prolific career in Turkey with Besiktas and Kayserispor, which was a good sign. But given the previous marquee, Filip Holosko, came from the same league and never totally dominated at Sydney, hesitation was natural.

Bobo wasn’t a dazzling, fleet-footed Brazilian striker who would wow the crowds. With his imposing size, he appeared more of an old-school throwback. He looked more Fred than Ronaldo.

Advertisement
Two years on and it is fair to say the 33-year old striker has defied all expectations. He is the forward that cannot stop scoring in a team that cannot stop winning. He scored his 27th league goal on Friday night, in his 27th game of the season, clinching a 1-0 win for Sydney FC over Melbourne Victory.

It is undoubtedly true that Bobo receives the greatest service the A-League has ever known, with Milos Ninkovic and Adrian Mierzejewski serving up goals on a plate. And if it’s not them, it’s Alex Brosque, Josh Brillante or Brandon O’Neill.

But it still takes a hell of a striker to finish the chances that come his way. And keen observers of the Sky Blues will note that for every goal Bobo is delivered on a silver platter, there’s another that he carves out for himself.

And while Ninkovic and Mierzejewski are generally the ones critics have thought of first when it comes to lavishing praise on Graham Arnold’s all-conquering side, the Brazilian firmly moved into their category long ago.

I have no hesitation in nominating Bobo in the five greatest A-League strikers of all time, a list that includes Besart Berisha, Archie Thompson, Shane Smeltz and the man whose single-year A-League goalscoring record he recently passed, Bruno Fornaroli.

While the first three on that list have enjoyed lengthy spells in the competition, Fornaroli and Bobo are notable for how quickly they have accumulated goals. They are absolute poachers.

You can make a case for all five being the best of all time. Although Berisha has scored the most, he played in two of the most dominant teams of his era, whereas Smeltz scored frequently with inferior service (and even in a FIFA World Cup).

Archie Thompson, the league’s first great striker, is probably the league’s most iconic player over the first 13 years.

In terms of pure talent, I’d say Fornaroli is the most gifted. He is probably the most complete forward to ever set foot in the competition. The array of goalscoring tools at his disposal makes you wonder how he didn’t succeed in Europe.

In terms of one I’d pick first, I’d take Berisha (at his peak), purely for his unrelenting will to win, no matter the situation. Despite the fact that he’s lost a little bit of pace and cutting edge, he’s not lost his hunger for goals and three points.

Which leads us back to the Brazilian. In a way, he has elements of Berisha and Fornaroli, but may even be a better finisher than the both of them. Bobo is the player who doesn’t need a second chance to score. He’ll bang it home first time, every time, without the histrionics.

He seems to be almost unbeatable one-on-one and, this season especially, has developed that Berisha-like knack of turning half-chances into goals. And so it was on Friday night after just seven minutes.

This past week, he broke Fornaroli’s record as the A-League's record goal scorer in a single season – amazing considering we have finals still to play.

Perhaps the only knock on Bobo, if there is one, might be about his mobility. But I wonder if that’s a visual trick, given his rotund figure only seems to be an asset in asserting his presence. Could he do more defensive work? The aforementioned four certainly didn’t.

Maybe we just haven’t gotten to know him well enough as a personality (which is nothing to do with his talent) to fully appreciate him. And maybe we’ve been seduced by the dazzling feet of Sydney’s other stars.

But as the goals continue to thunder in, on the back of eight in the FFA Cup, it’s clear we are witnessing something very special indeed.

Will he break Damian Mori’s Australian league record of 31 goals – achieved across 37 games in the 1995-1996 season? The way he’s going, anything is possible.