Sepp Blatter and Vladimir Putin were among those to congratulate Gianni Infantino on becoming FIFA president. 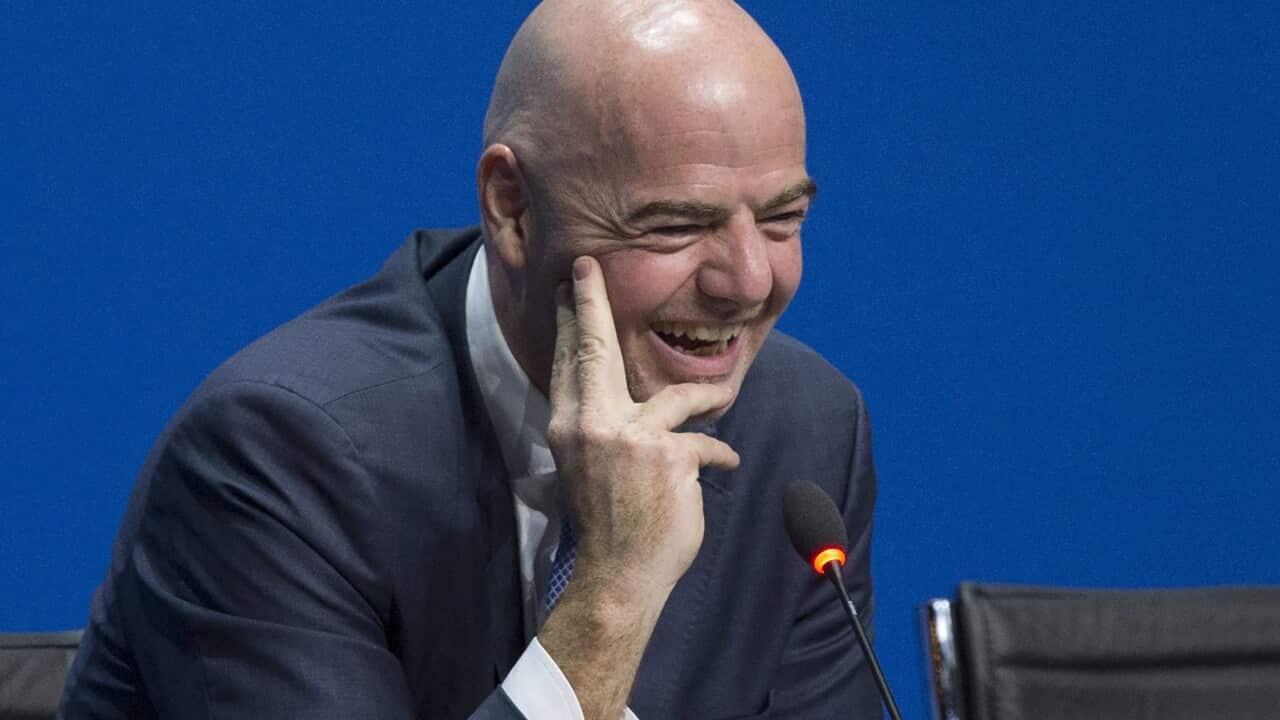 Here is a look at reaction from key associations and organisations to his success.

Advertisement
Former FIFA president Sepp Blatter: "I'm happy that Gianni Infantino is president, a man from (the Swiss region of) Oberwallis like me. I drank some mulled wine with him at Christmas time, gave him tips." (ZDF)

Football Association chairman Greg Dyke: "It's been a corrupted organisation for a very long period of time. There's a big job to be done. But at least we've got a reform programme and at least we've got a president in whom we can trust. (Infantino is) very competent, very organised, very together. Not a showman, but good fun. He has got a lot of qualities and it will be very good for FIFA." (Sky News)

Russia president Vladimir Putin (Russia hosts the 2018 FIFA World Cup): "Your active and fruitful activities within international sports organisations and significant personal contribution to developing the football movement have rightfully brought you a high level of authority. I am confident that your professional experience and extensive creative and organisational potential will help you in your new office, and serve to strengthen FIFA's positions in the world. I would like to confirm Russia's readiness to continue constructive cooperation with FIFA, particularly in preparing for the 2018 FIFA World Cup."

Scottish Football Association chief executive Stewart Regan: "I think it's a really positive piece of news for football today. Gianni spoke incredibly passionately on the stage. He's obviously won everybody over at FIFA and I think it's great news for football." (Sky Sports)

Irish FA chief executive Patrick Nelson: "Today is the beginning of a better FIFA. We passed a reform package earlier which takes away some of the chances of excess of the past and we've now got a president with a real strong track record of delivery. Delivery is what FIFA needs at the moment. Gianni will hit the ground running and we're looking forward to working with him." (BBC 5 Live)

Professional Footballers' Association chief executive Gordon Taylor: "Our sincere congratulations to Gianni Infantino as new president of FIFA. We supported him and hope he justifies that support in turning FIFA into a transparent accountable and responsible governing body for world football."

Q: What does the result mean for the future of FIFA?

A: Some suggested none of the five candidates would do enough to transform FIFA, but many believe Sheikh Salman bore the most similarity to the disgraced Sepp Blatter. It is Infantino, though, who is from Switzerland, like Blatter.

A: Not quite. Infantino, the face of draws for UEFA competitions, insists he is not a politician but a football man, putting the game first. He promised to share the wealth, more than doubling football development grants to the 209 member associations.

Q: Isn't there some controversy around him?

A: Well, he stepped into the presidential race only after UEFA president Michel Platini was banned from all football-related activity. The pair remain close and it is that relationship which has been scrutinised.

Q: How will he convince us it's not 'same old FIFA'?

A: He must see that the reforms are implemented and that any hint of the corrupt practices which prompted the worst crisis in FIFA's 112-year history is swiftly stamped out. He must help the United States and Swiss law enforcement agencies in their investigations into the practices of FIFA's past.

Q: How significant are the reforms adopted?

A: The separation of powers and the day-to-day commercial operations had to happen. Greater independence and more roles for women were necessary, too. Some argue the reforms vote should have been postponed as they did not go far enough.

Q: Is there cause for optimism for the future of football?

A: Yes, but, the proof of the pudding is in the eating. Scot Alasdair Bell, UEFA legal director, said the FIFA reforms should pass: "Otherwise the future looks less than certain for the institution". The same applies if the reforms are not implemented in full.

Q: What does it mean for the home nations and Ireland?

A: The Football Association, led by chairman Greg Dyke, backed Infantino publicly. So did the Scottish FA, while the Welsh, Northern Irish and Republic of Ireland also supported the UEFA candidate. All could benefit from his idea of an expanded FIFA World Cup, but the feasibility of a 40-team tournament has already been downplayed.

Q: How long will Infantino be around?

A: Gone are the days of Jules Rimet's 33-year leadership, Joao Havelange's 24 years in charge, or even Blatter's 17. Infantino will complete the four-year term for which Blatter was elected last May, which runs until 2019. The reforms mean he can serve a maximum of three four-year terms. Those terms do not have to be consecutive, though.

Football experience: UEFA general secretary and master of ceremonies at its draws, such as the Champions League draw

Controversy: Announced his candidacy after UEFA president Michel Platini was banned from football-related activity. His close relationship with Platini, who is contesting a six-year ban for a 'disloyal payment' received from Sepp Blatter, has invited scrutiny.

Credentials: Infantino points to the success of UEFA, saying revenues almost tripled in the last seven years from $7.67 billion in a four-year period to $19.94 billion for the same timespan.

Fact: The 45-year-old lawyer is from Brig in the Valais region of Switzerland, less than six miles from Blatter's hometown of Visp.

They say: "We've worked together for nine years. He's a hard worker. I've got confidence in him." (Michel Platini, suspended UEFA president)