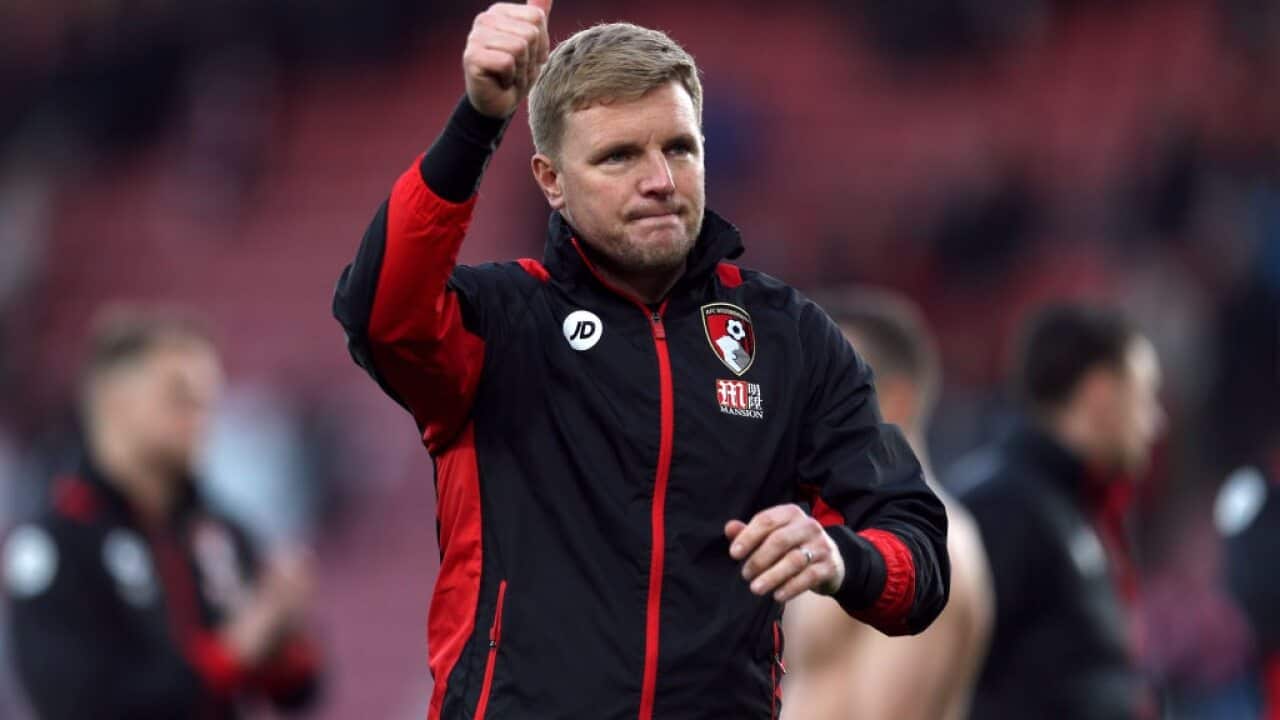 At 39 years old, English football finally has its managerial wunderkind. He’s taken the Cherries from total obscurity to the Premiership, where their miracle run of survival is set to extend into a third year.

Six points clear of the relegation scrap heap heading into tonight’s battle against Tottenham (Live on SBS, 9pm), Bournemouth will actually have their eye on a top-10 finish, with just two points separating them from 10th placed Watford.

Still, for a club of their stature – the smallest to have ever been in the Premier League, with a stadium capacity of barely over 11,000 – it’s another incredible achievement to stay in the top flight, and to play such superb football along the way.

Advertisement
Indeed, that has brought praise-aplenty for the manager. Now everyone is waiting, seemingly, for Howe to make “the step up” to a big job. But why the rush?

For better or worse, England went with Gareth Southgate and need to give the new manager a decent run at the position, regardless of whether he was the right appointment to replace Sam Allardyce. Howe needn’t be linked with that job again for a while.

Tougher will be keeping him away from the inevitable speculation about Arsenal, which continues to rise by the day. Arsene Wenger needs a successor and many, if not most, have anointed Howe as exactly that.

But if Howe does go there, here’s what he can expect: a jubilant introduction, followed by an avalanche of pressure the moment one thing goes wrong. It’ll be the same for whoever succeeds Wenger but because Howe has been hyped up so much – and his age is so young – the pressure will be amplified.

Earlier this month, ex-Spurs and Bournemouth manager Harry Redknapp was one of the few dissenting voices regarding Howe taking on one of English football’s most scrutinised roles.

“It's not the time. I can't see him going to Arsenal at this stage of his career. It would be too quick and too big a step. Arsenal is an entirely different game when you're dealing with massive players earning massive wages with massive egos,” Redknapp said. “He is doing fantastic at Bournemouth, he's getting better and his work here has been top class. What he has here [at Bournemouth] is a great group of lads here who have come from league clubs and who have been fantastic.

“I'm not saying that Eddie won't end up at somewhere like Arsenal one day – there's every chance he will – but at this time of his career, it wouldn't be the right move for him.”

It would be impossible to argue the “loyalty” card with Howe, so there is almost no point in mentioning it. He already bleeds cherry-coloured blood.

Howe began and ended his professional career at Dean Court, spending a total of 11 seasons in a club that quickly became part of his DNA after he took a youth contract (so much so that he became an avid fan of the senior team, often joining in on the terraces).

Though Howe left to join local rivals Portsmouth, he was soon loaned back to Bournemouth. The club was so broke they had to rely on a fan-driven scheme ('Eddieshare') to fund the £21,000 needed for his permanent transfer.

It was the best money the fans ever spent – for after retiring, Howe became a scout, assistant coach, reserve coach, caretaker manager and finally senior manager at Bournemouth within a matter of years. A brief spell at Burnley aside, he’s basically been a fixture there ever since.

And in that time, he’s dragged them from nowhere to the bright lights of the Premier League, where they have proved themselves much more than dogged battlers. They’re earned the right for a prolonged stay.

Howe has said before that he feels his current he is “leading a town” as much as a football club, and on that count he is absolutely right. He won’t get that anywhere else; it’s a once-in-a-career moment. He should enjoy that for as long as possible whilst further honing his management skills.

Perhaps he will be tempted to leave this summer knowing that if, for example, next year ended in relegation, his stock would fall dramatically. No more England, no more Arsenal.

But that threat shouldn’t be enough to deter him from continuing to build something special on the south coast. Howe might be a man in a hurry, but if he wants to be the best manager England has seen in years, he's in the right place at the right moment.