Ibini sweating on injury fate ahead of grand final

Sydney FC star Bernie Ibini faces a struggle to try to prove his fitness for the A-League grand final after admitting his injured hamstring was "pretty sore" when he left Allianz Stadium on Saturday night. 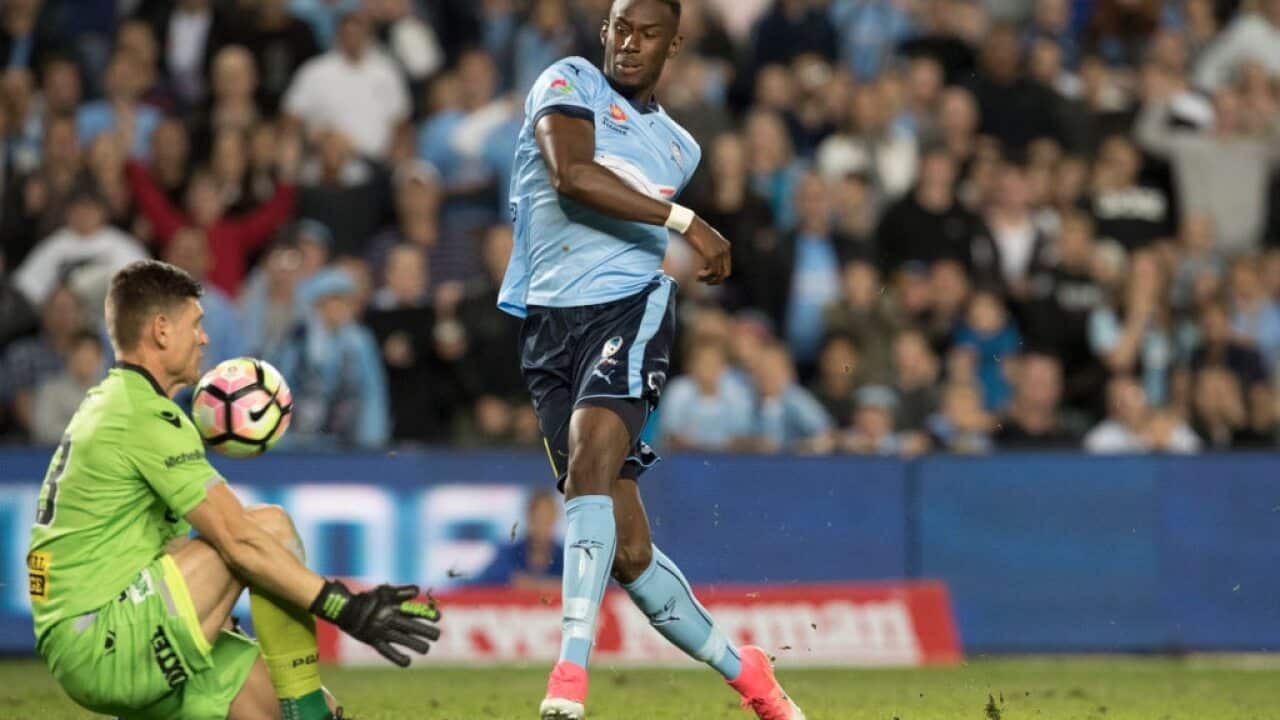 The results of a scan to be taken on Monday will show whether he has any chance at all of playing in next Sunday's decider against either Melbourne Victory or Brisbane Roar.

Ibini came off the bench to replace Filip Holosko in the 67th minute of the Sydney's 3-0 semi-final win over Perth Glory, but near the end of the 90 minutes he pulled up clutching at his right hamstring after challenging for the ball.

The livewire winger tried to continue for a couple of minutes but then left the field during added time.

Advertisement
Having never suffered a hamstring complaint before, the 24-year-old admitted he couldn't gauge the extent of the injury.

He now faces a nervous 48 hours waiting for the scan that will determine if he will miss the biggest game of the year.

"It's pretty sore at the moment, but a couple of days and we'll see how we go," Ibini told The World Game when he emerged from the Sydney dressing-room to go home.

"I'll have to have a scan on Monday, so not too sure yet.

Ibini began his season with the Sky Blues still trying to overcome a badly broken leg from his ill-fated switch to Club Brugge in Belgium.

Sydney coach Graham Arnold has mainly used him as an impact player off the bench but he remains an important part of the side with his ability to make things happen with his speed and physicality.

Ibini almost scored two minutes after coming on in the semi-final, when his shot hitting Perth goalkeeper Liam Reddy, before being deflected off the post.

Sydney's head of strength and conditioning, Andrew Clark, said he remained hopeful Ibini would be fit for the grand final showdown in eight days.

"We won't know until the next 48 hours exactly how bad it is," Clark told The World Game.

"We've got to let these things settle. Obviously you could see that he did something, but we're still hopeful we can get him up. We've got an extra day this week as well.

"He pulled up on the field and he was a little bit sore, but until we see the results of the scan we won't know what we can do as a medical team to try to get him on the park.

"We're very hopeful we'll have him right for the weekend. If it's a really low-grade one we can turn it around in seven days and Bernie's very mindful of doing the right thing in the meantime."

Ibini remains on loan from Club Brugge and, at this stage, is scheduled to return to there at the end of the A-League season, which means he is at risk of already having played his last game for the Sky Blues.

Asked about his future, Ibini said: "To be fair, I'm not sure. I've just got to play out the season and see what happens from there."