Ibini urges Arnold to give him a slice of derby action

Bernie Ibini hasn't played for 15 months after the shocking injury he sustained in Belgium, but he desperately wants a piece of the derby action and has declared he can do a job off the bench for Sydney FC coach Graham Arnold. 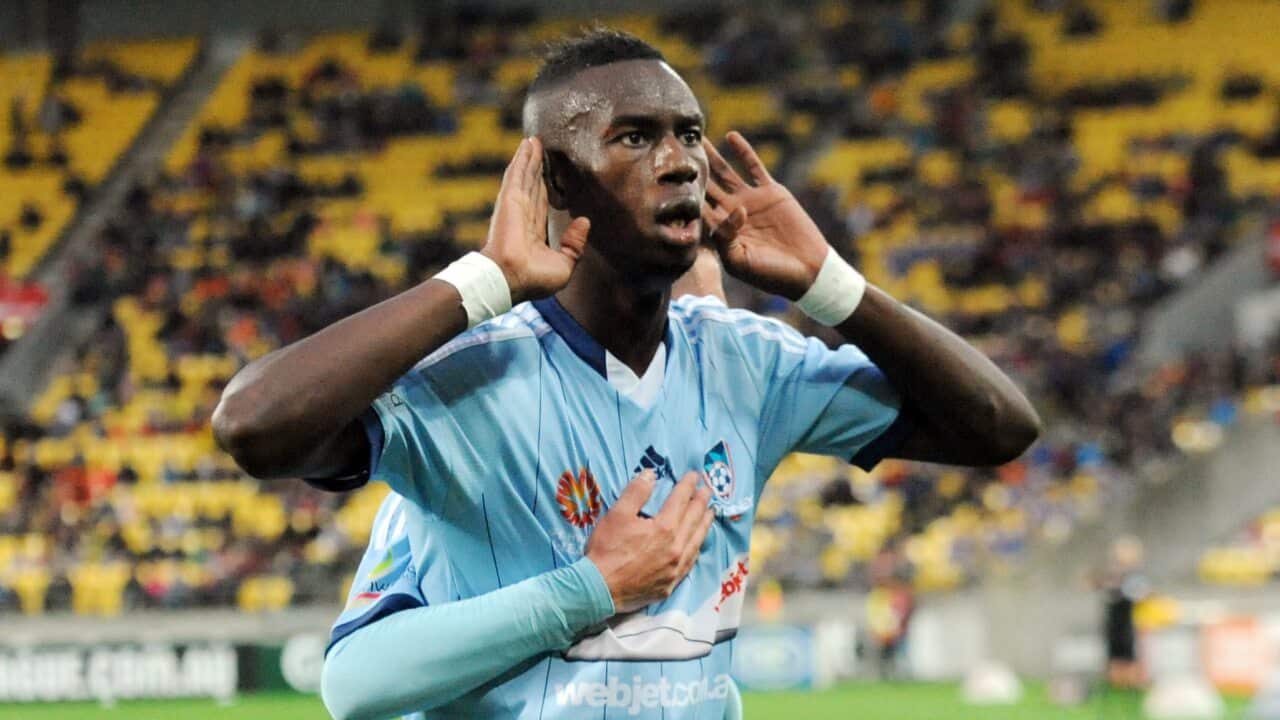 Asked what his message to Arnold was on the eve of the game against Western Sydney Wanderers at ANZ Stadium, Ibini told The World Game: "I'm ready to play if you want to select me.

"I wouldn't want to miss a derby. It's a massive game for both Sydney teams and for the code as well and it's a great way to kick off the season."

Arnold had forecast that Ibini would finally make a comeback in the team's final trial game against A-League champions Adelaide United behind closed doors at Allianz Stadium last Thursday, but as it turned out he didn't play in what was a 1-0 win to the Sky Blues.

"Yeah, for whatever reason the physio thought it was best that I just continue to train at that stage," Ibini said. "It wasn't a setback or anything, I'm in full training.

"I'm hoping to be on the bench against the Wanderers. I've been in full training for two weeks now, so I feel ready and obviously it's now down to the physio, if he thinks I'm ready, and then it comes down to 'Arnie' and whether he wants to select me.

"I've been training every day and doing all the sessions. I feel 100 per cent ready to go. I'll have to see if the physio thinks it might be one week too early, but they haven't said no yet. I'm just waiting to find out."

Ibini joined Club Brugge at the end of the 2014-2015 A-League season, but at his first training session he was tackled and suffered a broken leg and torn ankle ligaments.

It has been a long road back for him and obviously the Sky Blues will not take any unnecessary risks with him now he is so close to playing again.

Ibini said his recovery had sped up since he returned to Australia.

"While I was still over there I thought it was going to take longer, but since I've been back it has improved really well and I've worked really hard," he said.

"I was still thinking about it a bit when I was doing technique sort of stuff, making sure I was running properly and that, but since I stepped things up and started getting into training drills and games at training I've been too focused on that to think about it anymore.

Arnold named an 18-man squad for the game that included Ibini, but with two players to be omitted there is still no clear indication of whether he will be in the match-day squad.

But Arnold said the tall winger was under consideration.

"Bernie's going great," he said. "He had a terrible injury, but he's now training fully and he's in consideration for selection for Saturday. Because of what impact he can have off the bench, he's someone we're looking closely at."

Arnold said he had some difficult decisions to make about his line-up because of the good form of so many players in the pre-season.

"I've got 15 or 16 players who have performed exceptionally well in pre-season fighting for starting spots," he said.

"That's what I wanted this year, competition for places. Two first-team players in every position and against Blacktown City in the FFA Cup we had on the bench Vedran Janjetovic, who played every game last year for Sydney, Milos Dimitrijevic, two years ago player of the year, Matt Jurman, last year's player of the year, our captain Alex Brosque and Matty Simon.

"Those guys played in the trial against Adelaide and were outstanding, so it's a tough decision I have to make, but that's what I'm paid for."