Iceland, the smallest country to ever grace a major tournament, will face England in the UEFA EURO 2016 last-16 after securing a remarkable late 2-1 win against Austria. 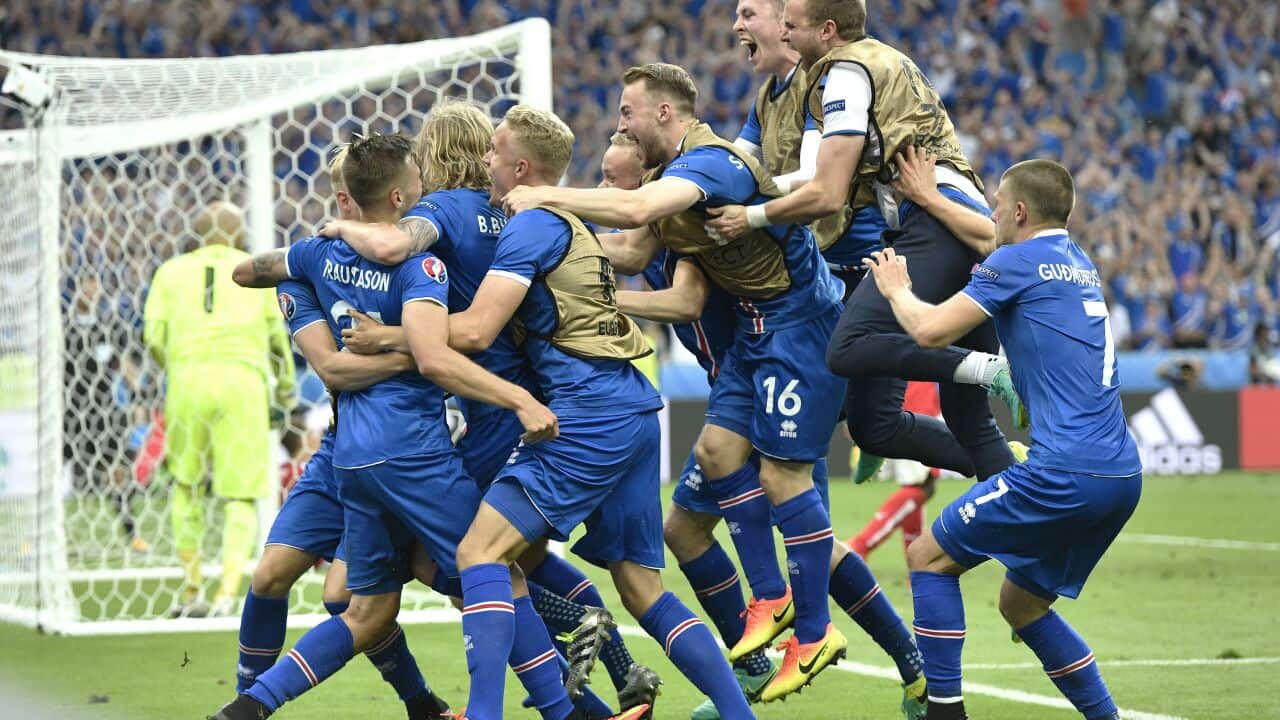 Hailing from a tiny island of just 330,000 inhabitants and unable to play outside for large chunks of the year to due to the freezing conditions, it was remarkable that the North Atlantic nation even made it to the finals.

Advertisement
Iceland have upset the apple cart once again, though, securing a last-gasp 2-1 win against Austria, ranked 10th in the world, thanks to Arnor Ingvi Traustason's stoppage-time effort in Paris.

Their first-ever win at a major tournament sets up a fascinating last-16 clash on Tuesday (AEST) in Nice against England - a country approximately 165 times the size of Iceland.

The minnows threatened from the outset as Johann Gudmundsson's thunderous early effort hit the goal frame, with Jon Dadi Bodvarsson opening the scoring smartly after 18 minutes after officials missed Aron Gunnarsson stepping across the line when providing the mammoth throw that led to the opener.

Aleksandar Dragovic wasted the chance for Austria to go in level after hitting a penalty against the post, but an improved second-half display brought a goal as substitute Alessandro Schopf scored a smart solo effort.

Marcel Koller's side peppered the Iceland goal for the remaining 30 minutes yet not only failed to get the win they required but suffered a late defeat, with substitute Traustason finishing a stoppage-time break.

Fans of the success-starved nations were in understandably good voice at the Stade de France, where Austria were rattled almost as much as their goal frame in the opening stages.

Iceland set the tone inside two minutes as Gudmundsson hit a wonderful drive that keeper Robert Almer watched helplessly hit the top corner of his goal.

There was a nervy moment when Marko Arnautovic dispossessed dilly-dallying Hannes Halldorsson, but the goalkeeper recovered impressively and Kari Arnason fired over at the other end soon after.

Austria looked a shadow of the side that qualified so impressively and fell behind after 18 minutes as Gunnarsson's long-throw caused havoc.

Officials missed the captain's foot crossing the line and the throw was flicked on by Arnason to Bodvarsson, whose impressive feet and strike across the goalkeeper put Iceland ahead.

There was a disbelieving pause as the Nordic fans realised the ball had rippled the net - a goal Austria quickly went about trying to cancel out.

Julian Baumgartlinger and Arnautovic had efforts before Ari Skulason was adjudged to have fouled David Alaba. Dragovic took the responsibility from the penalty spot, only to hit the post in front of the ecstatic blue-clad support.

Arnason threw himself in front of a goalbound Alaba strike as Austria began with renewed intensity, unsuccessfully claiming a penalty after Skulason fell and brought Marcel Sabitzer with him.

Gylfi Sigurdsson showed wonderful technique in volleying across the face of goal but the pressure was now at the other end, with Arnason thwarting Sabitzer before Schopf was denied - for a few minutes at least.

The half-time introduction slalomed into the box and hit a left-footed strike across Halldorsson with 30 minutes remaining.

Sigurdsson saw a shot well saved but Austria were now in almost complete control, with Marc Janko turning just wide before Schopf was denied by the Iceland goalkeeper.

Florian Klein got away with a handball on a rare Iceland voyage forwards before Halldorsson tipped over an Alaba free-kick.

Austria's desperate attempt to snatch a win left them open and Iceland capitalised. Elmar Bjarnason broke down the right and sent a cross to the far post, where Traustason turned home.