Manchester City boss Manuel Pellegrini insists Sergio Aguero's injury is not serious but he is still unsure when his leading striker will return. 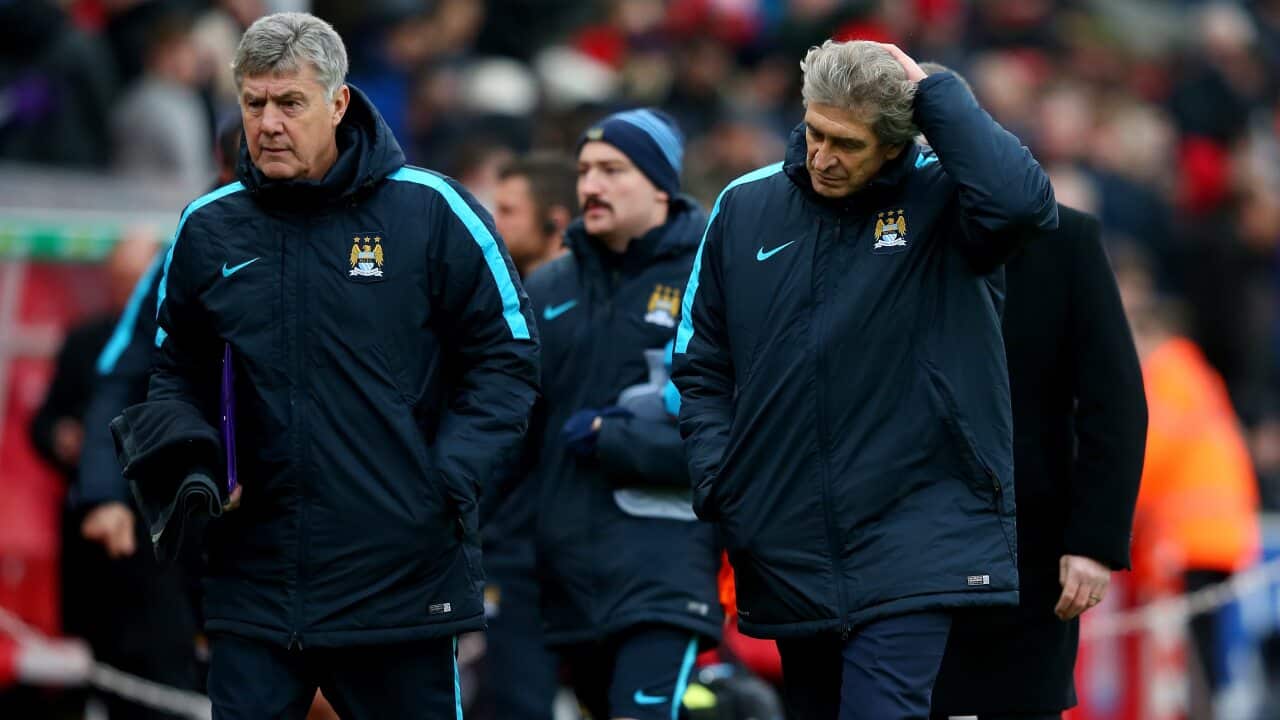 Aguero has missed two games since limping out of last month's victory over Southampton with a heel injury and will again be absent as they host Borussia Monchengladbach in the Champions League on Wednesday morning (AEDT).

Both manager and player have played down the problem but the 27-year-old also seems unlikely to return before the Barclays Premier League visit of Swansea on Saturday.

Asked if the injury was proving more serious than first thought, Pellegrini said: ''No, but it is an injury that he cannot work (on). He needs time to recover from that problem but it is not a serious injury, it is a pain injury.

Advertisement
''We hope (he will return this week) but we must see the way he improves in the next days. When he can run with normality he can work but if he cannot operate with his heel it is very difficult for him to do.''

Pellegrini is also uncertain when influential captain Vincent Kompany might be back in the reckoning.

The Chilean said: ''Vincent is improving. He is doing some tests on his calf, on which is the best way for him to improve. We will see in the next days when he can return.''

City have had problems with injuries throughout the campaign. Kompany has missed the last five games with a calf problem while Aguero also had an earlier spell out with a hamstring issue and David Silva only recently returned after a near two-month absence.

Samir Nasri is a long-term casualty, Fabian Delph missed most of the opening three months of the season and other key players such as Joe Hart, Yaya Toure and Pablo Zabaleta have had time out.

Monchengladbach coach Andre Schubert wants his Bayern Munich-conquering team to carry their momentum to the Etihad.

The German side cannot progress in the competition but can claim a place in the latter stages of the Europa League with a win and they go into the match in fine form after a run of 12 games unbeaten - stretching back to their home loss to City in September - and a superb 3-1 win over Bayern on Saturday.

Schubert, speaking in his pre-match press conference, said: "This has nothing to do with the Bayern match. It is a European game that is very attractive and we want to continue being in Europe.

"But we can take things out of the Bayern game - that we can play against very strong teams and get a result. They are one of the best teams in the world at the moment.

"That gives us strength and confidence and we want to show that again."

Schubert took charge of Monchengladbach following the resignation of Lucien Favre earlier this season and he has made an immediate impression.

The former youth team boss won his first six Bundesliga matches while in caretaker charge - an unprecedented feat - and in November was rewarded with a two-year contract. That run has taken a team that lost their first five matches of the season to third in the table.

Schubert accepts expectations are rising but does not think that places any extra pressure on the players in terms of the City clash.

He said: "We are going through a good spell at the moment. The fans should be excited and have expectations. As long as we remain with our feet on the ground, stay cool and maintain our targets, we don't have any problems with that.

"We know what we have to do. We will do everything we can to put on a great display against a great club."