Intrepid Socceroos let down by lack of punch

Australia's Socceroos are teetering on the brink of elimination from the 2018 FIFA World Cup essentially because they failed to overcome a glaring lack of quality in attack. 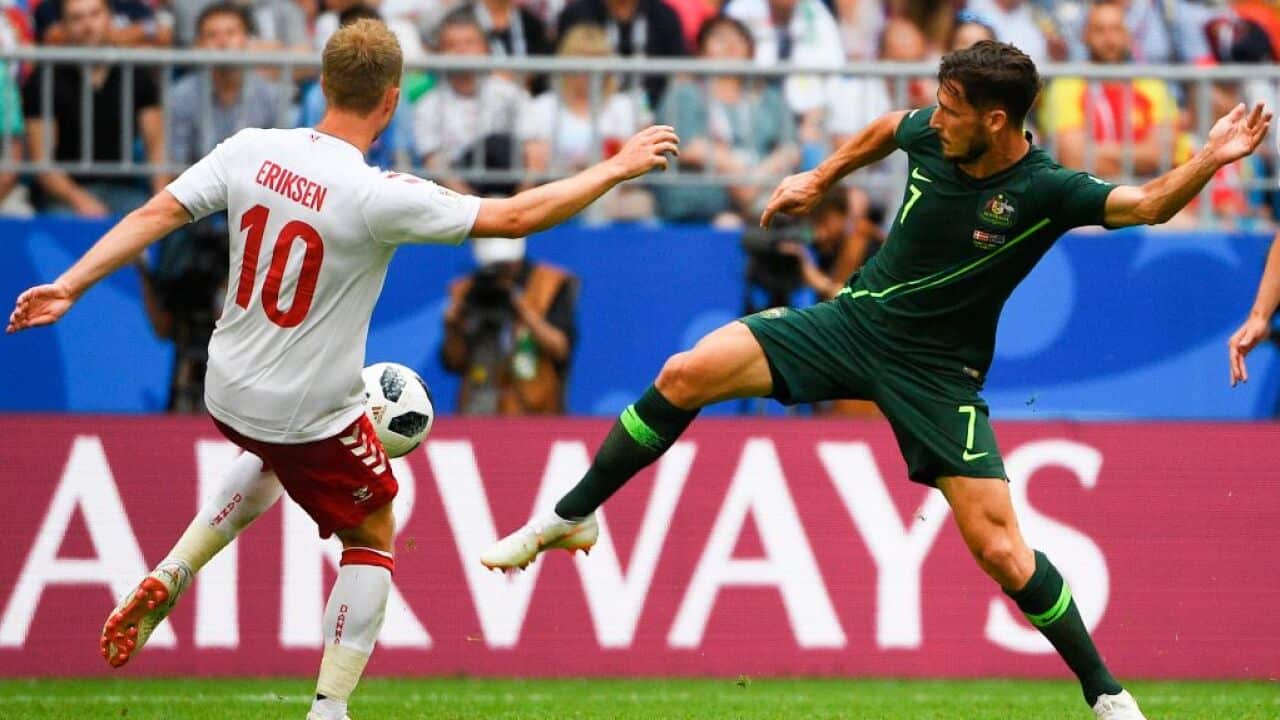 Mathew Leckie in a tussle for the ball with Christian Eriksen Source: AFP

Bert van Marwijk's Australians played one of their most impressive matches since the 2015 AFC Asian Cup in a group game with Denmark but could not go further than a 1-1 draw that puts their chances of progress in the competition in serious doubt.

The Socceroos now must beat Peru in their last game in Sochi next week and hope for favourable results elsewhere.

After their magnificent defensive performance against France in the first match in Kazan when they narrowly lost 2-1 in controversial and unfortunate circumstances, the Socceroos unleashed the full force of their attacking intent and penned the Danes in their own half for long periods of the match.

They showed the world that they are adaptable to different circumstances and can play quality football when they need to by making full use of their recognised strengths based on physicality, discipline and a fighting temperament to which the bamboozled Danes had no answer.

But scoring goals has always been and still is the national team's greatest weakness.

The Danes were there for the taking - no doubt about that - but the Australians let them off the hook with their sterility up front despite a sensational performance from Mathew Leckie.

The Bundesliga-based winger was in sparkling form and tormented his opposite defenders from start to finish.

Whenever he got the ball something was bound to happen.

Even Daniel Arzani did very well when he came on for Robbie Kruse on 68 minutes.

He showed enough skill, enterprise and audacity to make a strong claim for a starting spot in the team to face the Peruvians.

One player who faces an almost impossible task of facing Peru is striker Andrew Nabbout, who was an excellent and altruistic target man up top and never stopped running but he went off with a suspected dislocated shoulder 15 minutes from time.

The Socceroos had so much quality possession from the latter stages of the first half onwards that you cannot escape the feeling that this was the one that got away from Australia.

Danish star Christian Eriksen opened the scoring with a bullet of a shot that gave Mat Ryan no chance and captain Mile Jedinak converted a generously awarded penalty with his usual aplomb.

But despite Australia's territorial domination that was probably the only time in the whole match that Kasper Schmeichel in Denmark's goal was severely tested, which says it all .

No doubt questions will be asked why veteran Tim Cahill was not given a chance to do some damage, particularly since Leckie was in such a positive mood that the free agent surely could have gone on the end of one of the winger's tantalising crosses.

But Cahill's omission is not the main reason Australia did not get the points in Samara.

It's the general lack of flair and punch up front that was the team's undoing.

Just consider this: the Socceroos have not scored from open play in their last four competitive matches.

They were scoreless in the first leg in the World Cup intercontinental play-off versus Honduras and won the return 3-1 thanks to a set-piece hat-trick from Jedinak comprising a free kick and two penalties.

This is not the sort of record that inspires confidence in the team's ability to find the net with regularity.

But having said that, not all is lost.

The Australians might just manage to sneak into the round of 16 if results go their way.

The team's morale must be high after two strong if unproductive performances against two teams that are in the world's top 12.

But unless Australia's national team shed their image of a toothless tiger they will never take the next step in their bold voyage towards worldwide acclaim.

There is no doubt that the Socceroos have shown in this World Cup that they are physically and mentally well prepared, tactically sound and hard to contain when they get going.

If only we learn to put the ball in the net.