Irvine stepping it up to appeal to Socceroos coach

Australia midfielder Jackson Irvine is used to playing the role of underdog - but Burton Albion's record signing is ready to jump from the periphery into the Socceroos mainstream after making a quickfire start to his new life in the Championship. 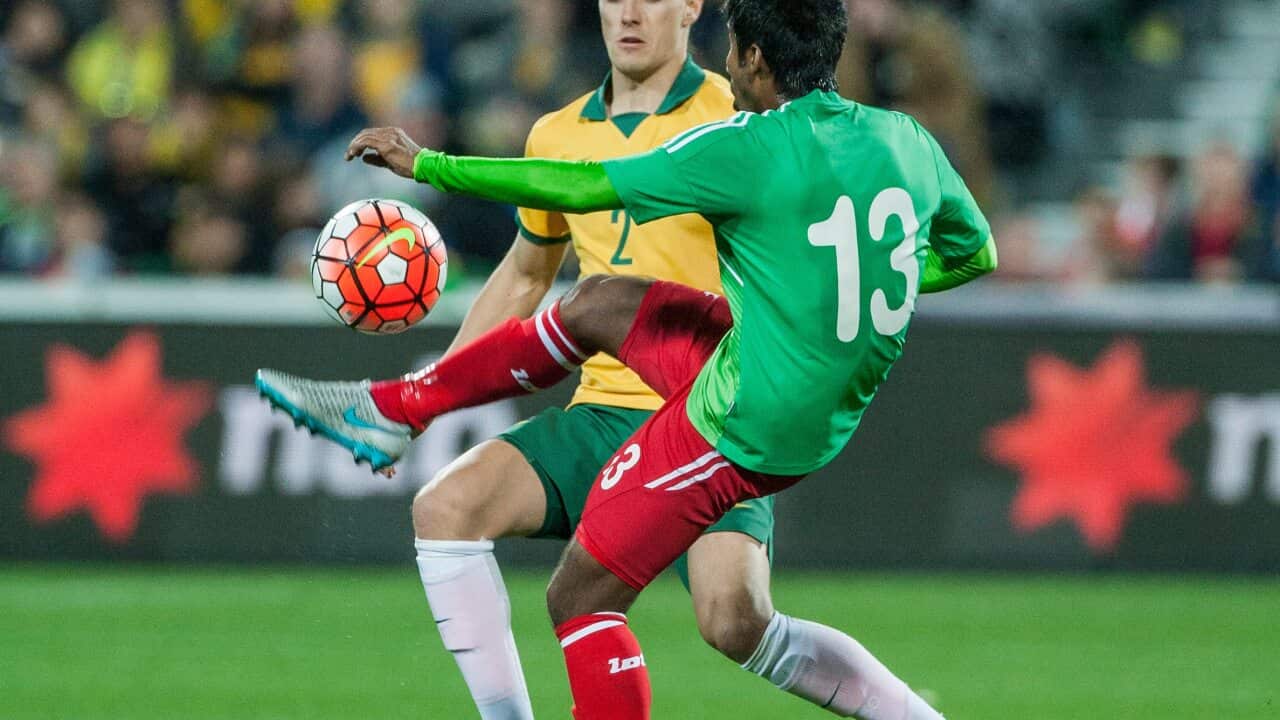 Jackson Irvine in action for the Socceroos Source: AAP

Having picked up just four caps since his debut against Canada in 2013, Irvine is bidding to crack a national team midfield brimming with big names.

And the former Celtic and Ross County man is making a case for himself after scoring his first goal for the club in their maiden Championship victory against Sheffield Wednesday in midweek.

He's among nine other Aussies in England's second tier – including midfield rivals Massimo Luongo and Aaron Mooy - and having been selected for next month's FIFA World Cup qualifying double header against Iraq and United Arab Emirates, Irvine knows he will never have a better chance than now to win the allegiance of Ange Postecoglou.

"I always saw the Championship as the next stage for me and when the opportunity came I didn't hesitate," said Irvine, who will make his third league start away to Blackburn Rovers on Sunday morning (AEST) after being suspended for the opening-round loss to Nottingham Forest.

"Of course, I am hoping if I put in the performances in what is a very good league it will help my chances with the national team.

"That last midfield spot has been chopped and changed and sought after the last couple of years.

"Mile, Millsy, Tom (Rogic), Aaron and Mass (Luongo) have all become mainstays and that's six, and I am after that seventh spot.

"I have found myself in and out at times but hopefully if I do really well this year I can make that spot my own.

"With so many talented players pushing for that spot it won't be easy. Stefan Mauk got himself a great move to Holland and he's a top player, Mustafa Amini is doing well and everybody knows how good Terry Antonis can be on his day."

Adding goals to his game, which Irvine, 23, intends to do this season, will only enhance his prospects.

"I am viewed more as a defensive midfielder but to be able to break forward for my club and score a few goals then it can't hurt," he said.

"People have told me I need to add goals to my game for a long time ... and I am steadily moving up. I scored one in my first season, two in my second, three in my third and if I get any more than four this year than it shows I am gradually improving. It was great to get off the mark early.

"It was disappointing to have no points from two defeats, but we have been playing well and didn't want to change too much for the game against Wednesday.

"Maybe we were a bit naïve before but we are learning very quickly."

Irvine recognises the magnitude of the visit of Iraq to Perth for the 1 September clash, followed six days later against UAE in Abu Dhabi, as to road to Russia 2018 hits the home stretch.

"Iraq is arguably the most important game yet in qualifying ... we know how tough it can be and home form will be vitally important. Everybody will be right at it to play a part if called upon," he said.

"We all know the manager isn't afraid to make changes when he feels people are right for certain games.

"We are more than aware of the threat they carry and they are a real force in Asia and want to among the Australias, Japans and South Koreas.

"But we have the quality and class that should get us through these games ... it will be about sticking to the manager's plans and performing to our best and if we do that we are capable of beating anybody."