Japanese football fans might be renowned for their good grace and humility but in Saitama Stadium on Thursday night several will be donning a controversial t-shirt taking a shot at the Socceroos. 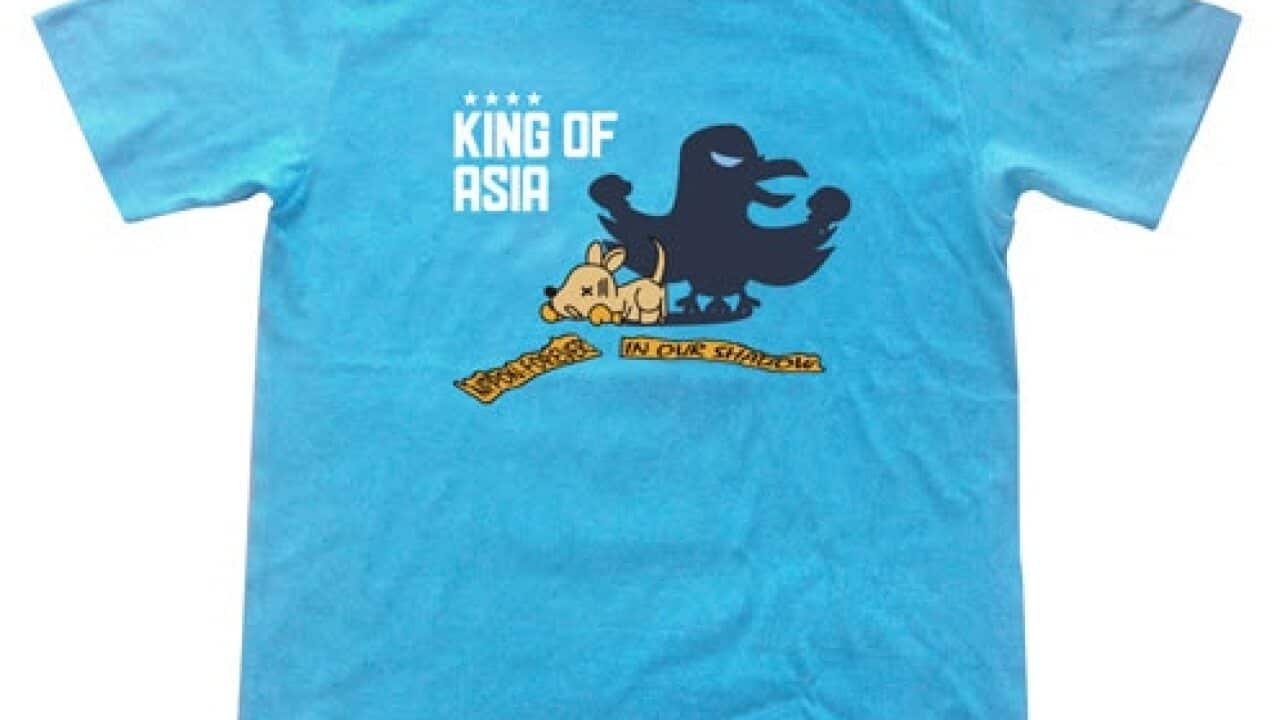 Tee-shirt portraying an eagle towering over a wounded kangaroo and a destroyed banner reading "Nippon: forever in our shadow" Source: jr-soccer-shop.jp

Ahead of the World Cup qualifier between the two nations in Tokyo, hostility is mounting as the pair get set to lock horns in the latest installment of this classic regional rivalry.

With top-placed Japan leading Australia by a solitary point with two matches to play, the winner of the match will almost certainly qualify for next year’s showpiece event in Russia.

Yet while the feeling between the two sets of fans has not escalated into something unseemly so far, the battle to be Asia’s best on the field has created a natural enmity off it.

Advertisement
One canny Japanese vendor has capitalised on the sentiment by selling t-shirts that portray an aggressive eagle – the symbol of the Japanese Football Association –  towering over a wounded kangaroo and destroying a banner often shown by Socceroos’ fans.

With the bold declaration that Japan are the “Kings of Asia” (with four stars denoting the nation’s four Asian Cup victories) the eagle stands over the torn banner split in half.

On the back is the number 12, believed to be a reference to Japanese fans being the “12th man” of the national team. The shirt is on sale for 3,780, approximately A$43.

The banner in question – “Nippon: Forever In Our Shadow” – is understood to reference the 2006 World Cup, when Australia memorably overturned a 1-0 deficit to win 3-1 in the opening group stage match.

The banner has often been spotted at Socceroos matches even when Japan haven’t been the opponent, and gained plenty of air time during the 2015 Asian Cup final.

Although the banner has largely been been used in a cheeky manner, some Japanese fans and commentators have felt it to be unnecessarily provocative.

There is also an argument that the saying is no longer true: although Australia are the current Asian champions, they haven’t beaten Japan since 2009, drawing three and losing three – including the 2011 Asian Cup final in extra time.

However, Socceroos fans might claim the banner is historically accurate, having won nine, drawn eight and lost five since their first clash in 1968.