Jedinak ruled out as Socceroos forced to make changes

Australia skipper Mile Jedinak is out of the Socceroos FIFA World Cup qualifying clashes against Bangladesh and Tajikistan after failing to recover from a hamstring injury in time for the trip to Perth. 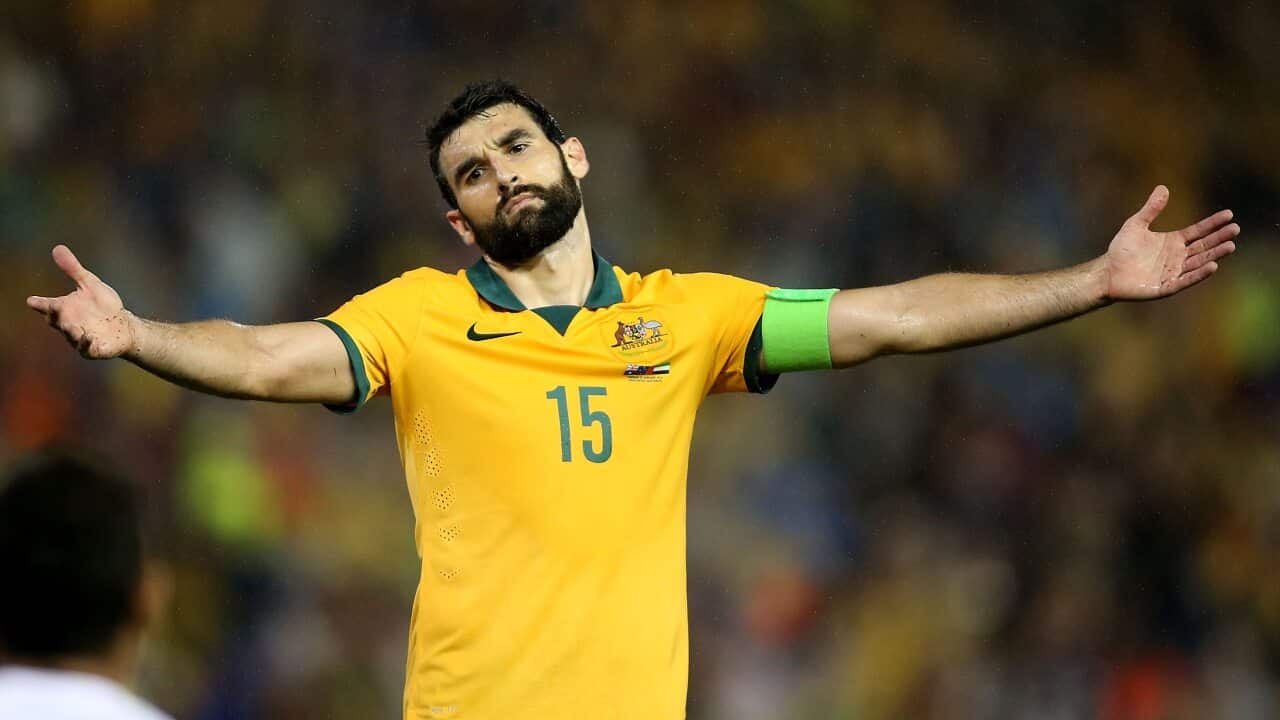 Jedinak was due to fly out of the UK on Sunday to meet up with the squad, but a hamstring injury while playing for Crystal Palace in the League Cup has put an end to his involvement.

“Mile picked up a hamstring injury that will keep him out for a short period of time so he won’t be making the trip for the games against Bangladesh and Tajikistan,” Socceroos coach Ange Postecoglou revealed today.

Jedinak is joined by Tomi Juric and Robbie Kruse on the sidelines and the trio will be replaced by Italian based attacker Chris Ikonomidis, striker Ben Halloran and Brisbane Roar midfielder Luke Brattan.

Advertisement
“Tomi (Juric) and Robbie (Kruse) have had recent injuries and after speaking to our medical staff we believe they are better served staying with their clubs to regain match fitness and not undertake the travel so they are available for matches in the next window," Postecoglou added.

“It gives Chris, Ben and Luke Brattan a great opportunity to come into the group and impress.

“The players will start arriving into Perth on Sunday night as we prepare for two important matches during this stage of World Cup Qualification.”

Opinion
Brattan the last piece of the puzzle

Crystal Palace captain Jedinak had been hopeful of possibly making the trips, and indeed playing against defending Premier League Chelsea in their London derby this weekend. But that also appears to be out of the question.

Jedinak was withdrawn in the 52nd minute of Palace's 4-1 extra-time League Cup win against Shrewsbury Town at Selhurst Park and his absence will be felt keenly in the Socceroos camp, even though Postecoglou welcomes back fellow midfielders Massimo Luongo and Tom Rogic for the games in Perth next Thursday and Tajikistan five days later.

“I pulled up a little but sore and coming off was more of a precautionary thing, because I didn’t feel it as worth risking in terms of it getting any worse,” Jedinak told The World Game before learning he'd not be making the Socceroos squad.

“It was getting a little uncomfortable and you have to be smart in those situations.”

Jedinak also said he is convinced Australia will rise to the challenge of amassing more precious World Cup qualification points without his services and experience.

“Without a doubt these are two important games, and on the back of the win in Kyrgyzstan, having the next game at home front of our own fans is something we need to embrace," he said.

“We need to hit the ground running. That’s what will be accepted of us. We have guys we've been missing coming back into play (Rogic, Luongo and Robbie Kruse) and as a fellow team-mate it makes you excited at the prospect.

“Tom Rogic has been unfortunate with injuries but he's back now for Celtic. He’s a very grounded guy and has been working his socks off to get back involved.

“I know Tom and he’ll be chomping at the bit. He offers something different for us and we know he can do that job for us when called upon.

“It’s also great to see Robbie back playing and getting some minutes under his belt for Bayer Leverkusen.

“He got injured in the final of the Asian Cup and was having a good tournament and just getting back to his usual self. He’s very strong-minded and has shown a lot of character to come back from his injuries (knee reconstruction and Achilles tendon rupture).

"He always gives his all in camp, even when he sometimes has not been able to play.”

Jedinak is also impressed by what he has seen so far this season from Luongo as he embraces his new role as playmaker at Queens Park Rangers.

“Mass has continued where he left off (at Swindon), and has settled right in with his new team and is playing with that confidence we all saw at the Asian Cup," he said.

Despite not starting a Premier League game for Palace so far this season in boss Alan Pardew’s reshaped midfield, Jedinak remains upbeat and focused on forcing his way back where many fans feel he belongs.

“I’ve done everything required of me in the pre-season and I am doing all I can to try and get myself in the team,” he said.

“It was unfortunate not being able to see out the game against Shrewsbury, but I will do what I have to play whatever part I can to be back in the side.

“You keep at it and you will get your fair share of opportunities ... that's the sort of mindset you need when you haven’t found yourself playing.

“That’s what takes you forward and then when you are called upon, you make sure you take that opportunity.”

A vital cog for Palace since his arrival in 2011, the 31-year–old isn’t letting his current situation unsettle him amid continuing interest from West Bromwih Albion.

“Of course I am happy at Palace. It’s a club that's given me an awful lot," he added. “I have a strong affiliation for the club and want what’s best for them.

“The team has hit the ground running with two league wins from our first three and it’s great to have the results on the board.”

WATCH the Socceroos take on Bangladesh on SBS next Thursday from  9:30pm (10pm kick-off, broadcast on one-hour delay).