Jeggo kicking up a Sturm in Austria

As if Ange Postecoglou didn’t have enough midfielders to choose from, yet another has emerged to vie for a shot with the national team. 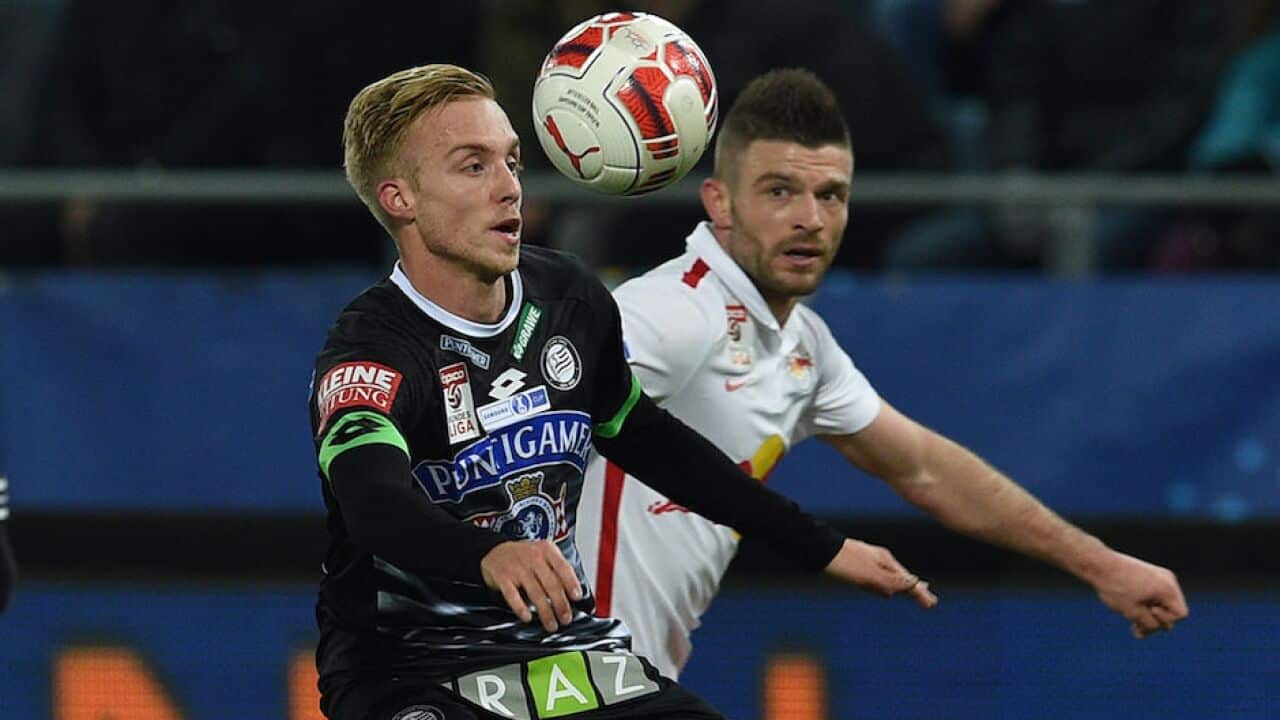 Former Melbourne Victory and Adelaide United metronome Jimmy Jeggo is flying in Europe, playing a pivotal role for Sturm Graz in their charge to the top of the Austrian Bundesliga, and Postecoglou will no doubt be taking note.

Signed from the Reds in January, Jeggo – a box-to-box buccaneer during his time in the A-League – has been converted into a No.6 by Sturm coach Franco Foda and is revelling for the club sitting a point clear at the top seven rounds into the new season.

READ MORE
Jeggo up for a Sturm challenge
Advertisement

Postecoglou, who knows Jeggo well from his brief stint in charge at Victory, is spoiled for choice in midfield with integral regulars like Mile Jedinak, Mark Milligan, Massimo Luongo, Aaron Mooy and Tom Rogic now facing opposition from Jackson Irvine for starting spots.

Vienna-born Jeggo is doing his utmost to muscle in on the action.

Jeggo has won many plaudits this season after starting every league game in a new deeper lying role.

“I would love to get involved with the national team ... you ask anybody and their main goal will always be to play for their country,” said Jeggo, who has yet to be capped by the green and gold at any level.

“There’s a lot of depth in Australia’s midfield … you only have to look at the boys who are not getting picked like Amini in Denmark who is banging in the goals, and there’s Antonis and Stefan Mauk.

“They are all attacking players, so if I can find myself a niche a little deeper that may help.

“First and foremost I just have to keep doing what I am doing and if that leads to the national team that would be brilliant."

Meantime, Jeggo is enjoying his start to the campaign for Sturm after struggling to make an impact last season.

“Long may it continue,” said Jeggo, who barely featured last season and was close to either going out on loan or moving on for good before his blistering start to the season.

“It was an uncertain pre-season, a bit touch and go, especially after the situation last year when I didn't get the game time," he said.

“If a couple of things hadn't fallen through I may not have even still been here. I didn’t want to go another six months of not playing, but I decided to give it everything I had, and to see where it took me.

"My main aim was always to stay with Sturm and try and break through. If I’d have left I would have there would have been a massive sense of unfinished business."

Jeggo was the victim if an administrative mix up when he joined the club, with the hierarchy wrongly believing he would be exempted from being counted as one of six allotted visa players courtesy of being Austrian-born.

“There were those issues but that’s in the past now," added Jeggo. “There was the big confusion when I signed. The club already had its quota of six foreigners, and they were all starting.

"I hadn't really proved myself at that stage and it was hard to break in. But there has been a huge turn-over in players since then and luckily things are working in my favour now."

And as for the standard of the competition?

“It’s a lot different from the A-League … it’s quicker over here and lot more physical and competitive," declared Jeggo.

”But some of the smaller clubs with smaller budgets are not really that interested in playing football.

“They don't have the players, so they sit deep and pump long balls, whereas in the A-League most teams try and play out from that back.”

It’s the first time Sturm have topped the table since 2010, and Jeggo sees no reason why the three-time champions can’t sustain a serious challenge.

READ MORE
The World Game Premier League Podcast Round 5 Preview - The underdog round?

“We're taking it week-by-week," he said. "There's a long way to gobut we have done really well against the big three teams in the league so far, the two Vienna teams and Salzburg, picking up seven points from them.

"Last year we played each of the three four times during the season and only picked up seven points out of all 12 games. I think that shows how well we have started.”