A goal either side of half time from Brazilian star Leonardo cancelled out a Besart Berisha strike and secured Jeonbuk Motors a 2-1 win over Melbourne Victory in their AFC Champions League Round of 16 second leg - and an aggregate win. 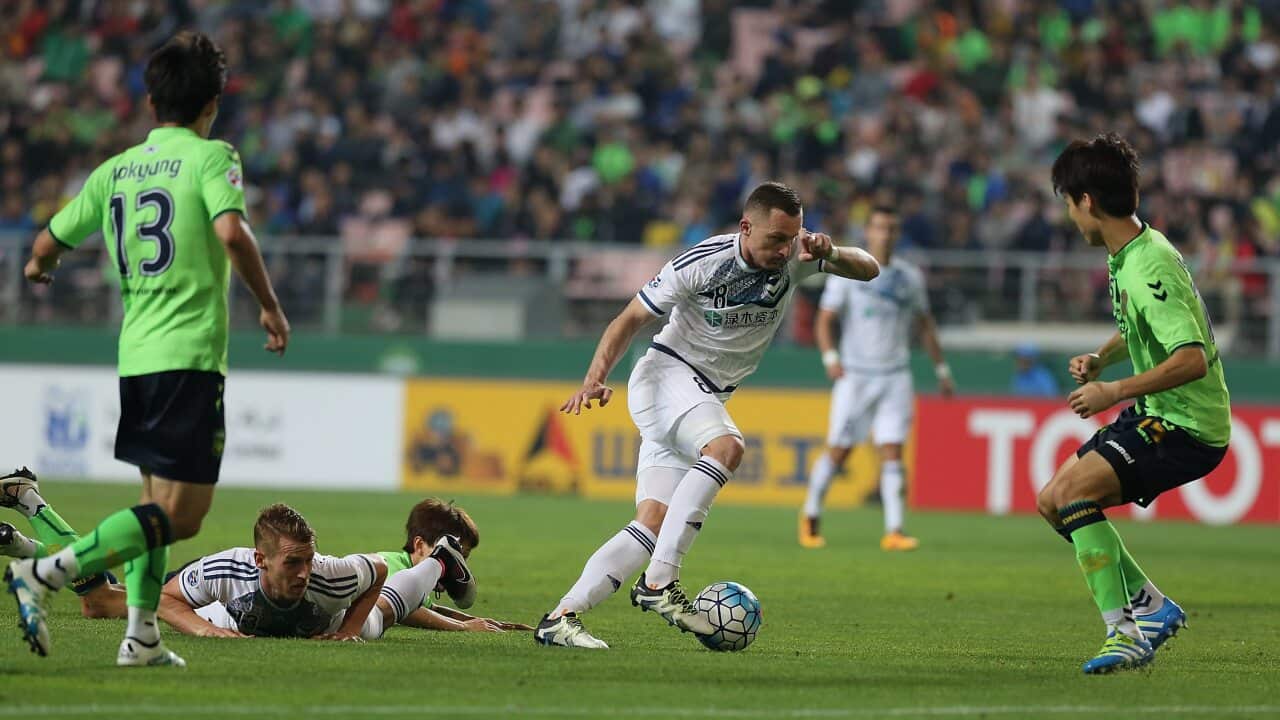 In what was Archie Thompson's final game for Victory, the striker was unable to give his side an early lead and a vital away goal after a good opening on four minutes.

Leonardo then stepped up to score a sensational free kick from a difficult angle, to give Jeonbuk a first-half lead.

While the visitor's pushed for an equaliser, the Korean side struck on the counter attack, with Leonardo again placing his shot beyond Lawrence Thomas to make it 2-0.

Advertisement
Berisha struck late on for Victory, but it wasn't enough to prevent Kevin Muscat's side going down 3-2 on aggregate.

Just three minutes in Thompson had an excellent chance to open the scoring when a cross found him free on the far post.

The striker had his initial header saved on the line by the goalkeeper and just when it seemed the follow-up effort was on its way in, a defender stuck a boot out just in time to block it.

Both sides had chances from distance in the first half, yet neither team was able to trouble the goalkeepers.

Eventually it was the home side that made the breakthrough just before the half hour. The man who scored in Melbourne, Leonardo, again punished the victory from a set piece, curling in a free kick from an acute angle beyond goalkeeper Thomas and into the top corner.

Victory pushed hard for an equaliser before the break and even though they created some opening, they failed to take full advantage.

Melbourne continued to throw men forward in the second half, but that allowed Jeonbuk to launch dangerous counter attacks that on a few occasions resulted in shots flying just past Thomas' post.

Thompson played his final part in a Victory shirt on 61 minutes when he was replaced by Jai Ingham.

Jeonbuk finally made the visitor's pay 20 minutes from time when substitute Ricardo Lopes teed up Leonardo on the edge of the box and the Brazilian slotted in the Korean's side second on the night to give them a 3-1 lead on aggregate.

Joenbuk had an opportunity to go further in front late on, but hit the frame of the goal, while at the other end Kosta Barbarouses saw his shot rebound off the post.

Berisha gave the Victory late hope of pulling back the two-deficit when he slotted in a cross from substitute Ingham in the 84h minute.

It wasn't enough, however, to prevent the Victory exiting the competition.

Muscat said he was "bitterly disappointed" to crash out, ruing early chances not taken by Thompson.

"We had our opportunities early on ... two good chances at 0-0 which would have made the game fairly different," he said.

"To go behind to another free-kick made life hard for us.

"In Melbourne we should have won that game and we made this game very difficult but I'm extremely proud of the group to get as far as we have."