Johnson says he was 'panicking' in police interview

England footballer Adam Johnson has told a court his world was 'turned upside down' when he was arrested for sexual activity with a 15-year-old girl. 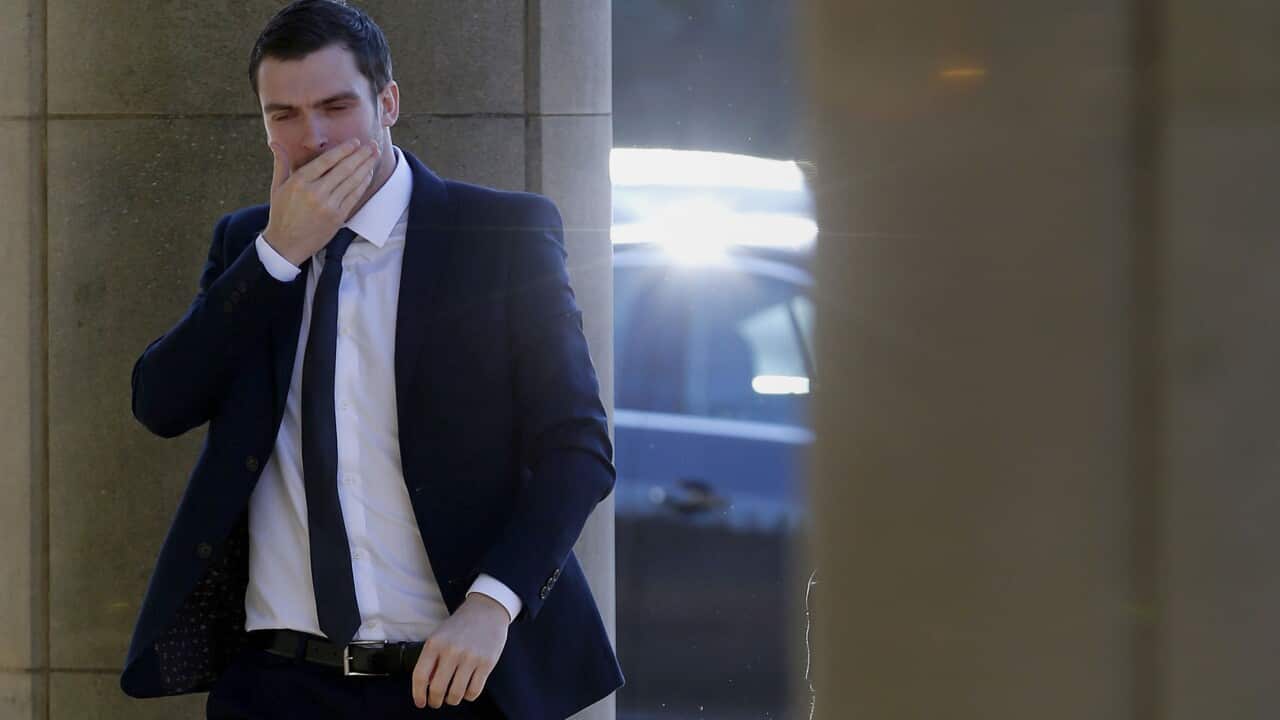 Johnson said he 'panicked' and was 'in turmoil' during his police interview after his arrest in March last year.

The 28-year-old former Sunderland winger told Bradford Crown Court he admitted kissing the girl in his car but said he tried to 'play it down'.

The court has heard the pair exchanged telephone numbers and messages for a number of weeks before meeting in January last year for Johnson to sign a Sunderland shirt for the girl.

Advertisement
Johnson had described how the WhatsApp messages became 'flirty' and 'inappropriate' before a second meeting on 30 January.

Johnson has admitted grooming and passionately kissing the girl in his black Range Rover but denies two counts of further sexual activity.

The footballer was arrested at the home he shares with his girlfriend Stacey Flounders in Castle Eden, Co Durham.

He admitted that he did not always answer some police questions entirely truthfully. He said: "My world had got turned upside down and I was trying to play it down as much as I could."

When asked by Orlando Pownall QC, defending, about what state he was in during his first interview, Johnson said: "I was panicking. I had all these thoughts going through my mind about everything. To name a couple, my career, my family, I was in turmoil."

Johnson said he was 'surprised' that the teenage girl had told police that further sexual activity had taken place.

He said: "I couldn't believe the things she was saying to police. I felt like someone else was telling her to say these things." He told the court that he did not try to feel her breasts or put his hands underneath her T-shirt.

He also denied engaging in oral sex, digital penetration or putting her hand on his penis.

In cross-examination, Johnson said he did not think of himself as an honourable man. He agreed that he was arrogant and audacious and 'lived the life of a celebrity'.

Kate Blackwell QC, prosecuting, said: "You pretty much got everything you wanted. You were adored by your fans."

Johnson agreed that he had taken a 'bold risk' by meeting up with the girl. But he denied taking advantage of the fact that she was a 15-year-old Sunderland fan who idolised him.

The footballer said he knew that he had 'seriously wronged' the girl.

The court heard that Johnson messaged the girl to say she 'owed' him for signing the Sunderland shirts.

The prosecutor said Johnson encouraged the girl to meet him for a 'thank you kiss' in the hope it would encourage her to engage in sexual activity with him.

He agreed that his attitude to the thank you kiss was 'keen'.

Miss Blackwell said: "And you did make it happen, didn't you? Because you were the adult here, weren't you? You were in control."

Johnson admitted that he wanted to touch 'private parts' of the girl's body but said the pair did nothing more than kiss. When asked why, he said: "Because when I had my kiss I knew that it was wrong and I didn't want it to carry on any further."

Johnson has now spent around seven hours giving evidence in the trial.

He stood in the witness box on Tuesday wearing a dark suit and tie with a white shirt.

During his evidence, he occasionally took tissues from a box and used them to blow or wipe his nose.

The footballer has pleaded guilty to one count of grooming and one count of sexual activity with a child, relating to kissing.

He denies two further counts of sexual activity with a child. The trial was adjourned until Wednesday.