Jurman set to be Socceroos' rock in Russia

They say timing is everything in life, and Socceroos defender Matt Jurman certainly hopes so as he rebounds strongly from knee surgery with the FIFA World Cup now at his fingertips. 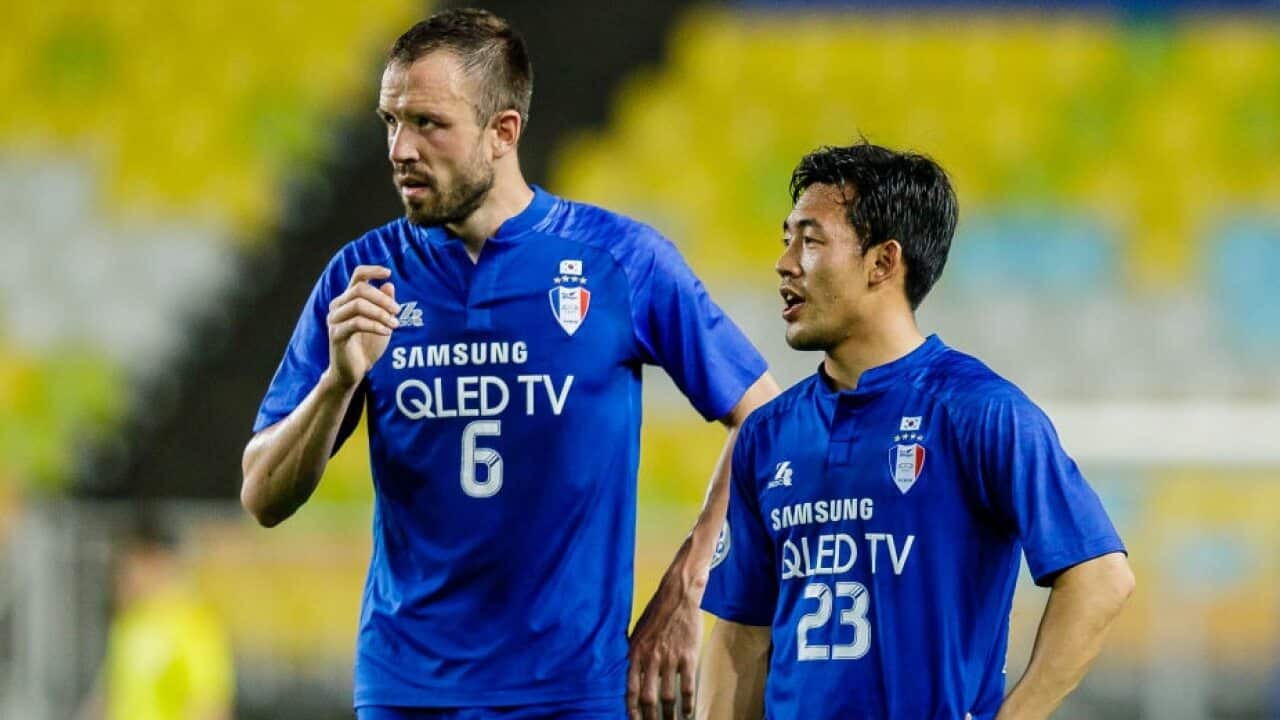 The Suwon Bluewings stopper arrived at Australia’s pre-Russia training base in Antalya, Turkey on Tuesday with four tough games under his belt in Korea on the road back from meniscus surgery in February.

He was part of the squad which played Norway and Colombia in March in coach Bert van Marwijk’s debut camp.

But the 28-year-old didn’t play as his body wasn’t quite ready. His absence was wistfully noted by the Dutchman as Australia crashed to an embarrassing 4-1 loss in Oslo, with van Marwijk crossing his fingers that four-cap Jurman would go on to make a timely recovery.

Advertisement
With Australia’s opener in Kazan against mighty France just over three weeks away, Jurman is back near the peak of his powers as a trustworthy rock at the back for his club, and very possibly for his country alongside the redoubtable Trent Sainsbury.

With Bailey Wright jettisoned by van Marwijk, the other contenders for centre-back spots are Milos Degenek and Mark Milligan.

While concentrating purely on making the cut when the 26 in Turkey are trimmed to a final 23 on June 3, there seems little doubt Jurman will be on the plane to Russia.

“I’m not looking too far ahead right now ... I’m just happy to be back playing again in a demanding league in Korea and competing in the Asian Champions League, where we’ve reached the last eight,” Jurman said.

“It was awesome to be invited to be part of the new boss’s first camp and, while I didn’t play in either game, I learned a lot about what he looks for tactically and [what] he expects to achieve with this group of players.”

The learning curve will be fast-tracked in the coming days as van Marwijk and his assistant Mark van Bommel drum their messages and training drills into a squad hanging on their every word.

“I’m feeling on top of things again and feel I’ve moved forward as a player in my one and a bit seasons in the K-League,” added Jurman, who headed to Asia off the back of five years at Sydney FC.

“I wanted to test myself in a new league and while I’ve had that injury setback this year, the facilities at the Suwon Sports Centre are top notch and the rehab I’ve had has been excellent and a huge part of the reason I’ve come back feeling so strong.

“I’ve played three games in the last eight days and it’s just great to be back on the field again.

“The fitness team at Suwon left nothing to chance and I’m ready to put my best foot forward now.”

Having had the surgery in Sydney, the recovery process was as much mental as physical for Jurman.

“Being alone in an apartment and not playing in a foreign country isn’t the easiest thing, in fact it was quite tough at times,” he admitted.

“But the whole process has made me stronger mentally and in the long run you’re grateful for that.

“I was in rehab from 8:30 in the morning to 6:30pm each day ... it was pretty intense. Basically three sessions a day but I’m feeling the benefits of that now.”

READ MORE
Recovering Brazil are favourites with everything to prove

Jurman is contracted in Korea for the remainder of this season with an option for a third year at the club currently sitting second on the K-League 1 ladder.

And he’s in no hurry to move on, explaining: “I think myself and the club are the perfect match right now.
“I’m really happy and loving my time in Korea. But in football you never know what lies ahead. We’ll see what happens at the end of the year.”

Jurman sees Australia as more than capable of shocking the likes of France, Denmark and Peru to progress beyond the group stage in Russia.

“I think we will make ourselves hard to beat and hopefully score a few goals,” he said.

“If we bring our best qualities to each game anything is possible.”