A rare poacher's effort from centre-back Ben Kantarovski earned Newcastle Jets a point in a 1-1 draw with Brisbane Roar at Hunter Stadium on Saturday. 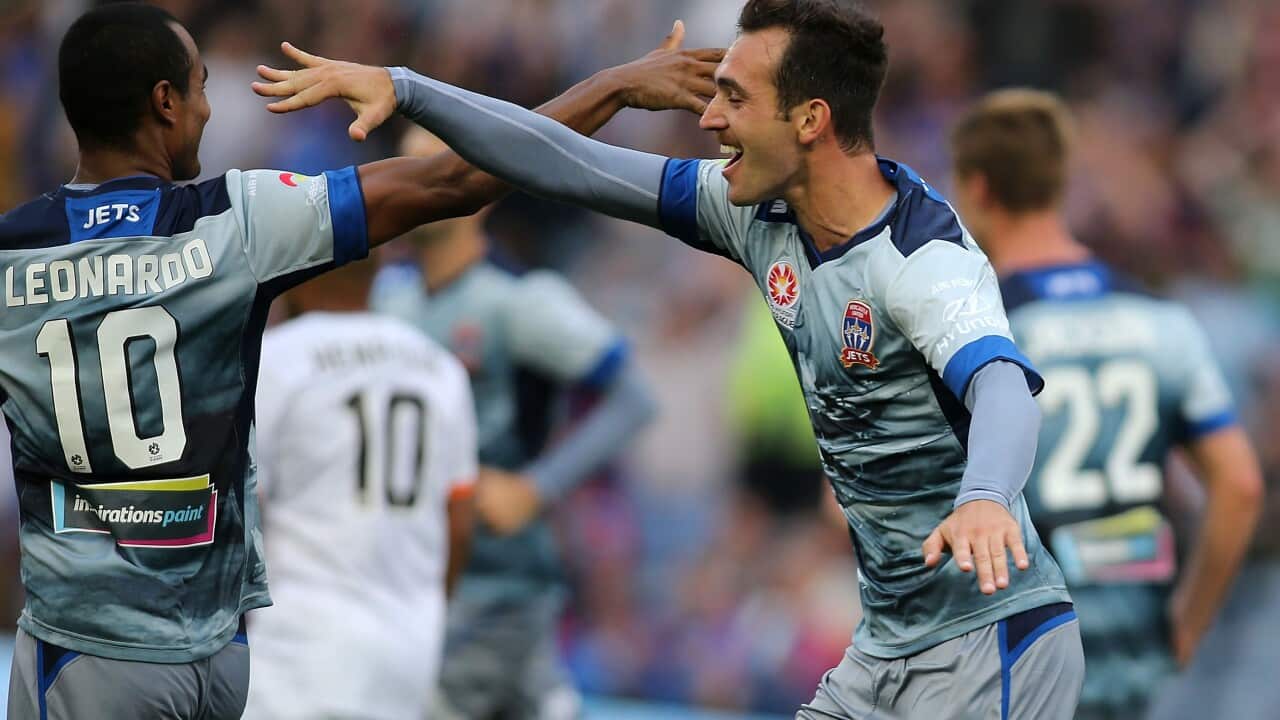 Roar hit the front early in the first half through a typical striker's effort by Brisbane marksman Jamie Maclaren.

But the Jets deserved something from the contest and Kantarovski made sure they got it when he was first to react after the visitors failed to clear from a corner, to seal a point for the hosts.

In front of 10,115 fans Newcastle wore their speical edition Jets kits, but it seemed that Brisbane was more inspired by the special pre-game RAAF fly over early on.

Advertisement
Thomas Broich forced Mark Birighitti into action with a well-struck shot less than five minutes in, before the Jets goalkeeper had to beat away another effort by Maclaren from close range.

The home side did began to threaten afterwards and went agonisingly close to opening the scoring on 13 minutes when David Carney's shot from just outside the area cannoned off the crossbar.

The action was flying from to end to end, with only five minutes later Roar winger Dimitri Petratos struck the post with a stinging drive from distance.

Approaching the interval the Jets had an excellent chance to go in front when Enver Alidovic crossed in for starting debutant Braedyn Crowley, who was standing alone on the goal line, yet somehow managed to sky his effort, in what could be the miss of the season.

Brisbane punished the host's for their wastefulness seven minutes into the second half. Brandon Borello slipped a pass through for Maclaren on the edge of the area and the striker cut inside before sliding a shot beyond Birighitti and inside the far post for the opener.

Newcastle finally responded 20 minutes later when persistent pressure resulted in a corner and after Roar failed to clear Kantarovski was perfectly placed to hammer in the loose ball and draw the Jets level.

The visitors came close to restoring their lead shortly after when a cross wasn't dealt with by the Jets defence and Maclaren pounced on the penalty sport, only to see his volley beaten away by Birighitti.

Brisbane still had a chance to steal all three points late on, but Cornoa's well-struck curling free-kick was saved by the Newcastle goalkeeper.

Newcastle coach Scott Miller said it was nice to be rewarded for their quality when up against the "superb" Brisbane.

"It was nice to be rewarded," he said.

"A point at home is a step ... in terms of the overall commitment I thought it was a professional display."

His Roar counterpart John Aloisi was unsatisfied to come up short given their 17 shots on goal including six on target.

"That's the disappointing thing. When we went 1-0 up, we actually dropped a little bit ... and then conceding a poor goal off a set piece is disappointing," he said.

"But then we created enough opportunities to go on and win the game and not putting that away and being as ruthless as we should be we dropped two points."