Koeman criticises Wanyama after third red card of the season

Southampton boss Ronald Koeman will have words with Victor Wanyama after the midfielder saw red yet again. 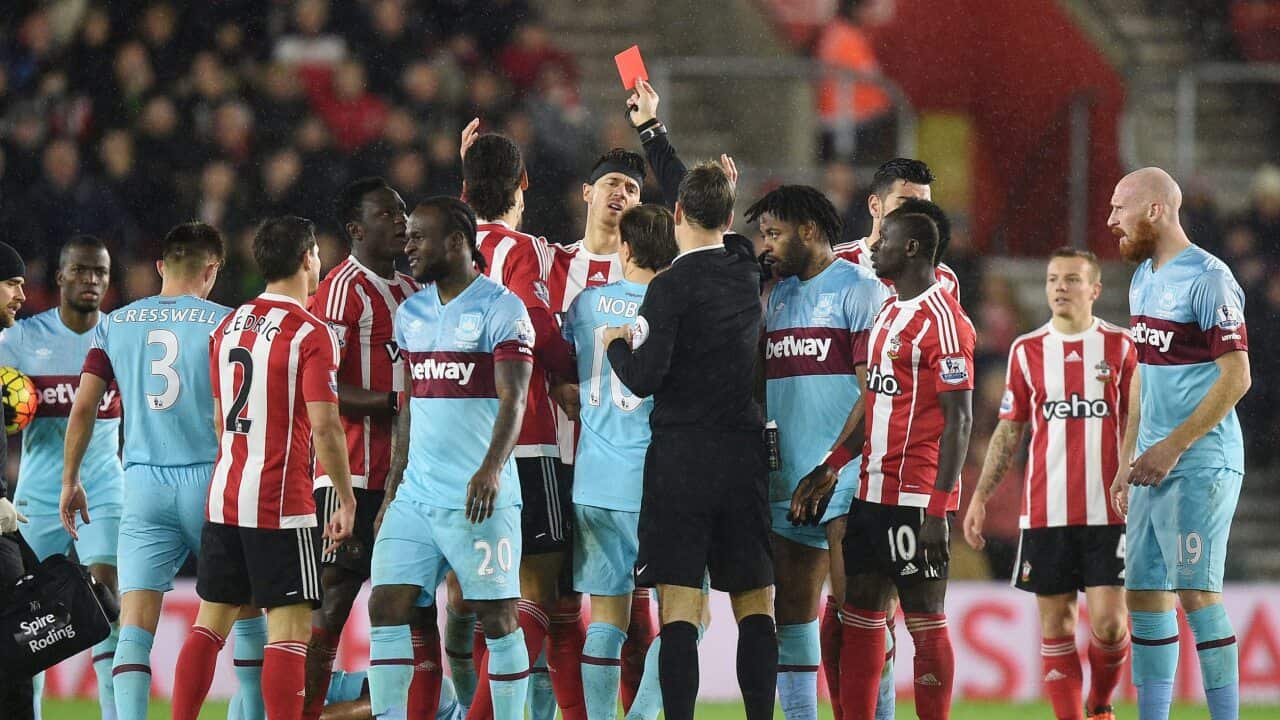 Wanyama was sent off for the third time this season when he chopped down West Ham United's Dimitri Payet during Saints' 1-0 win.

The sending-off may have looked harsh, but it left Southampton to play the remaining 36 minutes with 10 men as they clung onto Maya Yoshida's early goal.

Advertisement
"From the referee's position it's a red card," said Saints boss Koeman. "I was in front of it, and maybe it was harsh, but from his position maybe the tackle looked harder.

"But it was a hard tackle and it gives the referee the possibility to give a red card.

"It's not his first red card, it's his third, and that's not good. You have to learn from your mistakes so I will speak to him about it."

Saints were leading through Yoshida's ninth-minute strike after West Ham failed to deal with a corner and Wanyama teed up the Japan defender to sweep home from close range.

But nine minutes after the break Payet skipped away from Wanyama and was crudely brought down by Saints' midfield enforcer.

The challenge annoyed Hammers boss Slaven Bilic, who had seen his key playmaker sidelined for three months by a similar tackle by Everton's James McCarthy earlier in the season.

Bilic said: "It's a red card. When the second leg comes around it is dangerous.

"I don't mind sliding in. It was a big part of my game when I played. But for me as soon as the second leg comes round - scissors - it is unacceptable."

Despite their numerical advantage West Ham could not find a way past a Saints rearguard which has now kept five consecutive clean sheets.

Goalkeeper Fraser Forster has yet to concede in seven-and-a-half hours since he returned from a long-term injury.

In truth Forster had little to do, although when he was called upon to keep out a powerful Winston Reid header he was equal to the task with a fine point-blank save.

"He's a fantastic goalkeeper," added Koeman. "He's so quiet but he gives a lot of confidence to defenders. It's not a coincidence that when he comes back we start keeping clean sheets."

As solid as Southampton were, West Ham did not trouble them anywhere near as much as they would have liked.

New signing Emmanuel Emenike almost made a name for himself moments after coming on as a substitute but he headed Sam Byram's cross wide, and that was as close as they came to equalising in the second half.

"Against 10 men we dominated but we didn't create enough and didn't test their keeper well enough," said Bilic.

"Our final ball, shot or cross was simply not good enough. This was a great opportunity for us and we shouldn't have wasted it."