Kruse, Juric find form at the right time for Socceroos

Australia are poised to unleash their strongest attacking force in several months in the forthcoming 2018 FIFA World Cup qualifiers against Iraq and the United Arab Emirates. 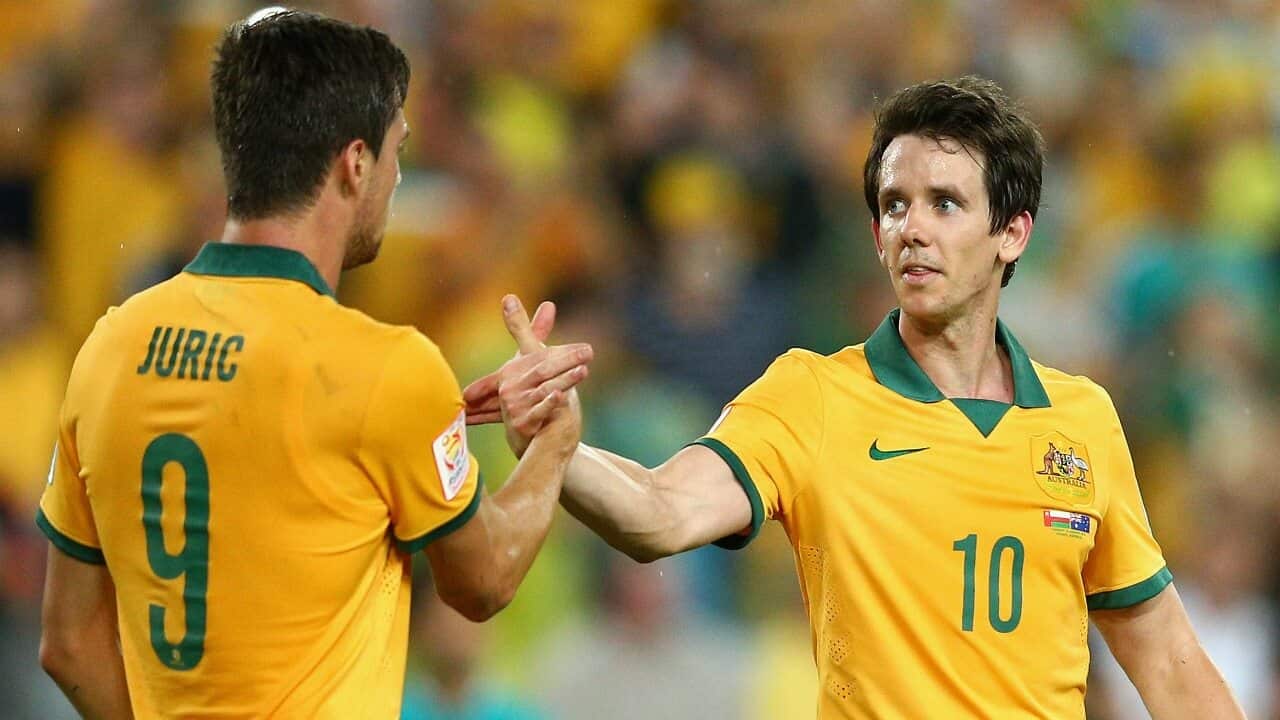 The Socceroos are chasing one of the two spots in the group that give automatic entry to the finals in Russia.

Ange Postecoglou's team and the UAE are joint third in Group B a point behind leaders Saudi Arabia and Japan.

They face the Iraqis in neutral Tehran on Thursday night and the UAE in Sydney the following Tuesday.

Advertisement
Six points from these two matches would just about guarantee the Socceroos a ticket for their fourth straight World Cup appearance.

Their chances of success have been substantially boosted by the revitalised form of two men who are expected to be named as strikers in Postecoglou's team.

Robbie Kruse and Tomi Juric are playing regularly for their clubs after overcoming various injury obstacles.

He has played 90 minutes in each of his new club's two Super League matches so far that resulted in 1-1 draws away from home.

His presence in the starting line-up is significant because his club has five foreigners and only three can play.

Juric is back scoring goals for his club Lucerne in Switzerland and will join the camp full of confidence and purpose.

He has played in Lucerne's last six matches - scoring three times - and will be seen as hot favourite to lead the Socceroos' line.

Mathew Leckie missed two great scoring chances for his club Ingolstadt in the match against Borussia Dortmund but the fact that he keeps playing regularly in such a high-quality competition as Germany's Bundesliga should not be underestimated.

The Socceroos' attack has been rather blunt and unimpressive in recent matches so much so that Australia's last three goals in two uninspiring draws with Japan and Thailand came from defensive midfielder Mile Jedinak ... via penalties.

But the attacking trio's overall quality should tip the balance in favour of the Socceroos in what is shaping as a crucial double assignment.

Postecoglou is very well served in midfield and it must be comforting for the men in the middle to know that a set of hungry, in-form strikers are willing to get on the end of their promptings.

The AFC Asian Cup-winning coach is a staunch believer in 4-3-3 although he has dabbled with 4-4-2 to try to "add a string to the team's bow", as he puts it.

But with more club and national teams these days opting for three at the back, you wonder if this formation is worth trying once the Australians secure qualification, hopefully with a game or two to spare.

A 3-4-3 comprising essentially three central defenders would save Postecoglou from having to drop Tom Rogic, Aaron Mooy or Massimo Luongo.

Such a formation would allow him to pick all three star players plus a defensive midfielder. It also means that 'wingers' Kruse and Leckie would have to do more running up and down the flanks.

Bearing in mind that the current fullbacks in a standard 4-4-2 are not exactly setting any houses on fire, a 3-4-3 might be worth looking at.