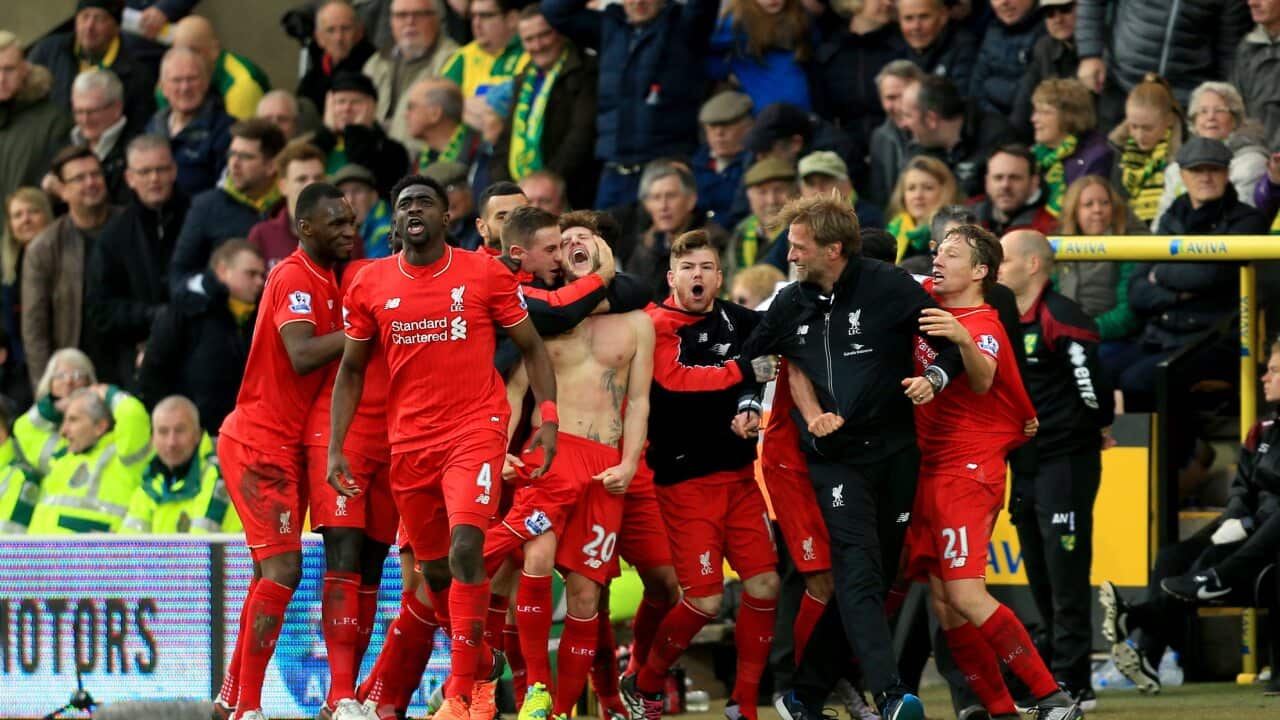 Jurgen Klopp's men had trailed 3-1 with under 30 minutes to go, then led 4-3 before Sebastien Bassong's stoppage-time strike levelled matters.

But there was still time for substitute Lallana to mis-hit a shot into the ground and secure a 5-4 victory as Liverpool's own defensive failings were eclipsed by Norwich's at Carrow Road.

Advertisement
Klopp celebrated on the pitch with a shirtless Lallana, but there is much work to do if the Reds are to advance to the Capital One Cup final at the expense of Stoke, visitors to Anfield for the semi-final second leg on Wednesday (AEDT).

It had looked like new signing Steven Naismith would be an instant hero for the Canaries after Dieumerci Mbokani cancelled out Roberto Firmino's opener with a brilliant back-heel.

Naismith scored his first Everton goal against Liverpool and, on his debut after his move from Goodison Park, the Scot struck again to give the Canaries a 2-1 half-time lead.

Jordan Henderson reduced the deficit from a gaping hole in the Norwich defence and another appeared allowing Firmino to equalise with 27 minutes remaining.

James Milner converted for 4-3 after capitalising on Russell Martin's dreadful pass back before the late drama.

The Canaries looked lively early on, with Naismith, Nathan Redmond and Hoolahan floating around in spaces between Liverpool's defence and midfield. But it was Liverpool who struck first.

Moreno and Milner combined well on the left and the latter fed Firmino.

The Brazilian was played onside by Robbie Brady and his scuffed shot went in via the boot of Declan Rudd and the post.

Brady recovered well to deny Milner inside the area moments later before Norwich exposed Liverpool's aerial vulnerability to draw level when the visitors twice failed to clear a corner.

Graham Dorrans headed back in and Mbokani did the rest, controlling the ball with his back to goal before his improvised finish left Sakho sprawling on the floor.

Liverpool's defence was again found wanting when Hoolahan beat Henderson and found Naismith, who finished brilliantly across goal for an interval lead.

Naismith next stole in on the wrong side of Moreno before the left-back lunged in from behind.

It might have been a foul, but Moreno made certain by recklessly bundling Naismith over from behind. Hoolahan converted the penalty.

Liverpool pulled one back within moments as Firmino flicked Nathaniel Clyne's cross on to an unmarked Henderson, who swept in.

The Reds equalised when Milner found Lallana, who centred for Firmino to control the ball once and prod it past Rudd.

It went from bad to worse for Norwich as Martin inexplicably passed back in the direction of Rudd without looking.

Milner intercepted and finished calmly to restore Liverpool's advantage only for Bassong to finish superbly from 20 metres for what he thought was the equaliser.

There was another twist to come, though, as Norwich failed to clear and Lallana's shot looped over Rudd.