Leicester's improbable triumph the highlight of an incredible season

It was the year everything changed. Just 12 months after beating relegation, 5,000-1 shots Leicester City upset the establishment to win the Premier League title. 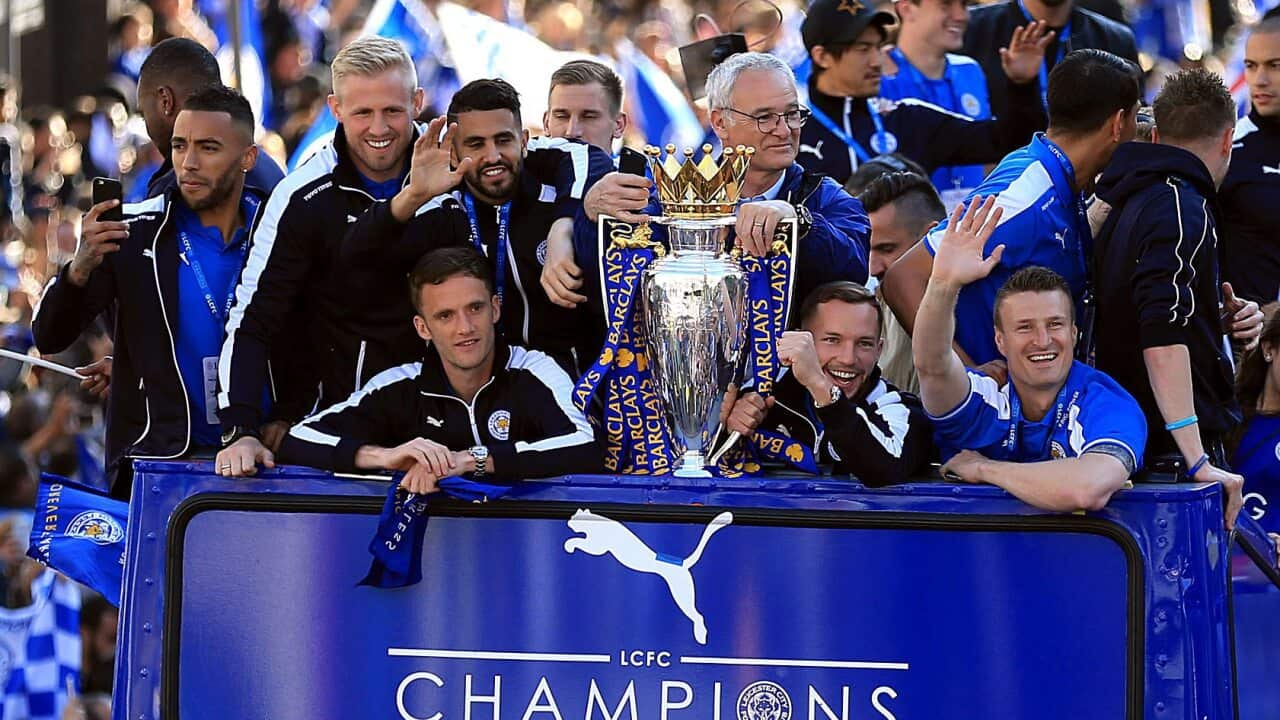 Just seven months after lifting the same trophy himself, Chelsea manager Jose Mourinho was sacked after an awful start to the season by the defending champions.

Claudio Ranieri's appointment at Leicester was mocked when he replaced Nigel Pearson after a turbulent northern summer for the Foxes, but they did not drop out of the top four after October and never relinquished their place at the summit, having moved top in January.

They were expected to falter, with a bunch of bargain buys and Jamie Vardy, who was playing non-league football four years ago, up front.

But led by Vardy's 24 goals and Riyad Mahrez, voted the PFA's Player of the Year, Leicester not only won the title but ultimately romped to it.

It was redemption for Ranieri, sacked as Chelsea boss in 2004 and replaced by Mourinho, as he won his first top-flight title in 30 years of management.

His approachable style was in direct contrast to Pearson, and the Italian's eccentric press conferences kept the spotlight on him and allowed his players to flourish.

Ranieri tinkered with details, their explosive counter-attacks being a key characteristic of the team, but kept the Pearson blueprint of hard work and team spirit.

No one reasonably expects Leicester to defend their title, Ranieri included, but after the most improbable of seasons Leicester cashed in as the traditional giants of the English game all faltered alarmingly.

Tottenham Hotspur pushed hard but could not catch them after late slip-ups which ultimately left Mauricio Pochettino's men in third, behind bitter north London rivals Arsenal.

Pochettino signed a new five-year deal in the final week of the season though as Spurs signalled their intent to ensure their title fight was not just a one-off.

That second-place finish meant the Gunners and their manager Arsene Wenger are without a title win in 12 years. They blew their best chance and allowed Leicester to race away despite being two points clear at the top in January.

Manchester City's title bid was seemingly derailed by the February announcement that Pep Guardiola would replace Manuel Pellegrini next season.

At the time they were second in the table but in the immediate aftermath they beat Sunderland before losing three straight games to Leicester, Tottenham and Liverpool to all-but end their title hopes.

Van Gaal was hounded by rumours he would lose his job - with the available Mourinho waiting to take over - but the defiant Dutchman held on, although United are all-but certain to miss out on UEFA Champions League football for next season.

West Ham United will need United to beat Crystal Palace in the FA Cup final this weekend if they are to be playing UEFA Europa League football in their first season at the Olympic Stadium after dropping to seventh in the table with a last-day defeat at Stoke City.

Yet whether or not they qualify for Europe's second-tier competition, Slaven Bilic's first season was a remarkable improvement after the Hammers finished 12th last year. It was also a remarkable campaign for Ronald Koeman's Southampton, who impressed and remained in the hunt for a top four spot until the last day and secured Europa League football with their final-day win over Palace.

Liverpool sacked Brendan Rodgers in October after a 1-1 draw in the Merseyside derby with Jurgen Klopp taking over and leading them to the Europa League final, where victory would give them a fifth English ticket to next season's Champions League.

The Reds finished a disappointing eighth in the league, which was still better than defending champions Chelsea.

Mourinho lost his job in December and was replaced by Guus Hiddink - the second time the Dutchman has been parachuted in to save the Blues after a temporary spell in 2009 - as the club's technical director Michael Emenalo spoke ominously about 'palpable discord' in the dressing room prior to the Portuguese's exit.

A shocking season saw them finish 31 points behind Leicester and well short of the top four, which at least means new boss Antonio Conte can focus solely on domestic matters when he joins the club after his duties with Italy at EURO 2016.

Mark Hughes's Stoke spent big, splashing out around $23.64 million on Xherdan Shaqiri and a reported $36.05 million on Giannelli Imbula, but a poor run-in left them in mid-table.

Watford and AFC Bournemouth, promoted from the Championship last season, survived comfortably although it could not save Hornets boss Quique Sanchez Flores who leaves after just one season.

West Bromwich Albion, under Tony Pulis, survived with ease but little style and Pulis will hold talks with boss Jeremy Peace this northern summer over his future with just one year left on his contract.

Swansea City survived after getting rid of Garry Monk in December and putting Alan Curtis in charge before Francesco Guidolin joined in January to work alongside him with the Italian signing a two-year deal at the end of the season.

Everton's disappointing season ended with Roberto Martinez getting the boot in the final week after almost three years in charge.

The Spaniard's reign ended with just one win in his last 10 games, including a last-minute 2-1 FA Cup semi-final defeat to Manchester United.

Palace flirted with relegation after a dramatic slump during the second half of the season where they went 14 games without a victory.

Alan Pardew's side were fifth on Boxing Day before they tumbled down the table but do have an FA Cup final to look forward to.

Sunderland's perennial survival battle ended with another success after Sam Allardyce guided them to safety when he replaced Dick Advocaat in October.

The Black Cats only spent one week outside the bottom three until March but their now traditional late rally pulled them clear of the bottom three and they sealed safety with a 3-0 win over Everton in their penultimate game of the season.

Aston Villa spiralled into the Championship having more managers than wins during a season of utter turmoil.

Full-time bosses Tim Sherwood and Remi Garde failed to stop their inevitable decline after years of battling the drop.

Rafael Benitez failed to save Newcastle United after replacing Steve McClaren in February as he ended a season which began as Real Madrid boss with relegation.

Norwich City joined them after just one season back in the top flight after their play-off win last season.