Australia and New Zealand should join forces and make a concentrated effort to set up an annual clash in honour of the ANZAC alliance. 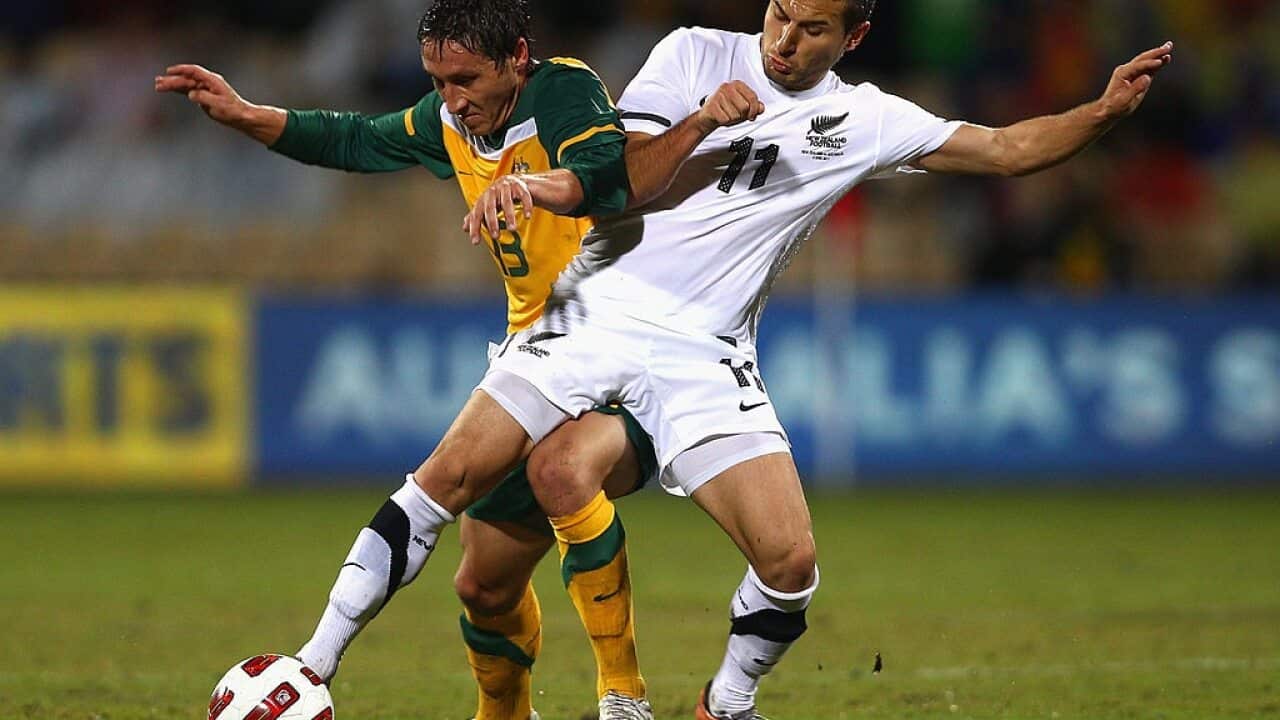 Mark Milligan and Kosta Barbarouses vie for possession in the last 'Anzac' international in Adelaide in 2011 Source: Getty Images

The idea is not new yet it cannot be dismissed anymore as an impossible proposition because it can be done, provided there is the will to do it.

The clash could take place once a year at the end of the A-League season with Australia and New Zealand taking turns in holding the event.

And if an annual confrontation is logistically too hard to organise on a regular basis, let's have the match once every two years.

Advertisement
England and Scotland will renew their old rivalry in a 'poppy day' 2018 FIFA World Cup qualifier at Wembley on Saturday (AEDT) and Aussie fans along with their Kiwi counterparts must be wondering why the concept of an Anzac challenge that was mooted a few years ago never got off the ground.

The reason it probably never materialised is because it is hard for both teams to field their strongest side due to the fact that many players ply their trade in Europe or Asia.

Crowds for such trans-Tasman clashes also are rarely very encouraging so the 'Anzac file' must have been left in the 'pending' basket ... the one you have a look at only if you have nothing else to do.

With goodwill and proper marketing this could turn into an important part of Australia's and New Zealand's football calendar, particularly in that vital period when both teams are trying to qualify for the World Cup, as they are at the moment.

I'm sure that respective coaches Ange Postecoglou and Anthony Hudson would welcome the opportunity for their players to participate in an annual match with enough needle in it to make it all worthwhile.

Australia defender Alex Wilkinson and New Zealand striker Shane Smeltz, who both have played in a World Cup and who have locked horns many times in the A-League, would love the idea to come to fruition.

"If they can sort out the timing of the match I cannot see why we should not have it once a year," Sydney FC's Wilkinson said.

"It makes a lot of sense because the rivalry is there and it will only grow even more like it has in rugby league and rugby union.

"New Zealand have obtained some good results lately so I'm sure that the contest would be highly competitive."

Smeltz, who plays his club football for Kedah in Malaysia, shared Wilkinson's sentiments.

"It's a great idea that has been discussed many times," Smeltz said.

"Unlike the England-Scotland match, an Australia-New Zealand clash would present a few logistical problems because of the number of players from both sides who play in Europe.

"But there are enough good players in each camp for a strong squad.

"The players would love it and so would the fans so this is something that can be built into an even stronger rivalry than that which exists now.

"This can work and it should be made to work."

The two countries have provided some memorable moments over the years.

The Kiwis will never forget the 2-0 win in Sydney in 1981 that provided a platform for their team's qualification to the World Cup in Spain the following year.

Australia still cherish the 5-0 aggregate drubbing inflicted on their trans-Tasman 'cousins' in 1997 as they attempted to reach the 1998 World Cup in France.

Australia played New Zealand for the first time in Dunedin in June 1922 and lost 3-1.

The two countries have played 64 A international matches. The Socceroos won 40, drew 11 and lost 13.