Let's accept it: Socceroos are just not good enough

ANALYSIS: Clueless, rudderless and hopeless: there is no other way to assess Australia's meek capitulation to Norway in Oslo. 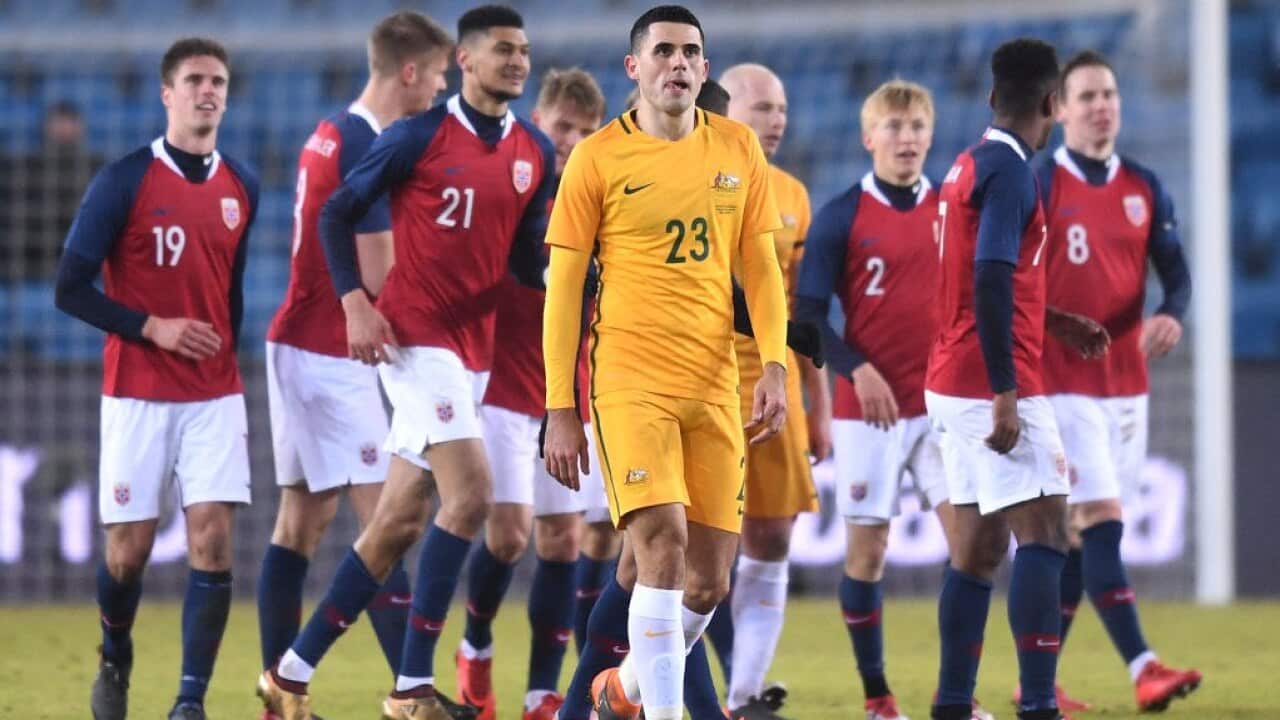 The Socceroos suffered an embarrassing 4-1 defeat against an ordinary Norwegian side in the first match of Dutch coach Bert van Marwijk on Saturday morning (AEDT).

At the end of a hugely disappointing and deflating match, the Dutchman was left in no doubt about the 'mission impossible' he faces at the 2018 FIFA World Cup in Russia which is less than three months away.

Australia face France, Denmark and Peru and on the evidence of the mismatch in Oslo, they would be lucky to get a single point in the group, let along reach the second phase.

Advertisement
The sloppy Socceroos were so poor and disjointed that they made the Norwegians look like world beaters, such was the ease with which the home team perforated the visitors that had more holes in their defence than a platter of Swiss Emmental cheese.

The defence was at sixes and sevens all night, the midfield was often overrun and outclassed and the attack was, well, pretty non-existent.

The Socceroos opened the scoring in the first half with a well-timed header by midfielder Jackson Irvine from an Aaron Mooy corner.


It would be the Australians' only memorable moment in a match they should try to forget as quickly as possible.

Much was said about the failings of the three-at-the-back system that was controversially installed mid-campaign by previous coach Ange Postecoglou.

And the news that van Marwijk would revert to a four-man defence was greeted with optimism by those who saw the old system as the catalyst for the Socceroos' wobbles in the second half of the qualifying campaign for the World Cup.

Events in Oslo showed very clearly that the numbers game at the back is not the reason for the Socceroos' woes.

While the media and fans debated the merits or otherwise of the two systems, little emphasis was made on the crucial fact that one of the main areas of concern for the national team was their general slowness with or without the ball and inability to track back fast enough when they lost possession, especially in the opposition half.

Yet the glaring point that emerged from the Oslo debacle is that this Australian team is not good enough to compete at the highest level, as it currently stands.

It is hard to accept this but we are doing ourselves no favours by not acknowledging it and acting accordingly, such as giving young players more opportunities to play at the highest domestic level or reducing the number of foreigners.

There are several players in the Socceroos squad who are hardly of international standard ... they can get by in Asia but not on a world stage.

The current Socceroos have shown that they can do it as a unit occasionally, but certainly not on a regular basis.

The glaring problems we saw in Oslo were not new.

You cannot expect the Socceroos to be a force to be reckoned with at the highest level when they are so poor at set pieces, when they give the ball away so cheaply in dangerous areas, when their passing is so erratic, when their movement is so slow and when they are unable to create meaningful scoring opportunities.

Fans would be hoping that the humbling performance against Norway was merely a sign of van Marwijk's transition designed to bring the best out of the team come mid-June.

They would also be hoping for a reaction and a marked improvement in the next match against Colombia on Wednesday morning (AEDT).

A positive performance in London against a much stronger and far more experienced side than Norway would go a long way towards strengthening the resolve of van Marwijk and his players.