Lyden eager to work his way into Socceroos calculations

Uncapped Aston Villa rookie Jordan Lyden is hunting for a national team breakthrough as he eyes off a spot in Australia's squad for next month's glamour international against England. 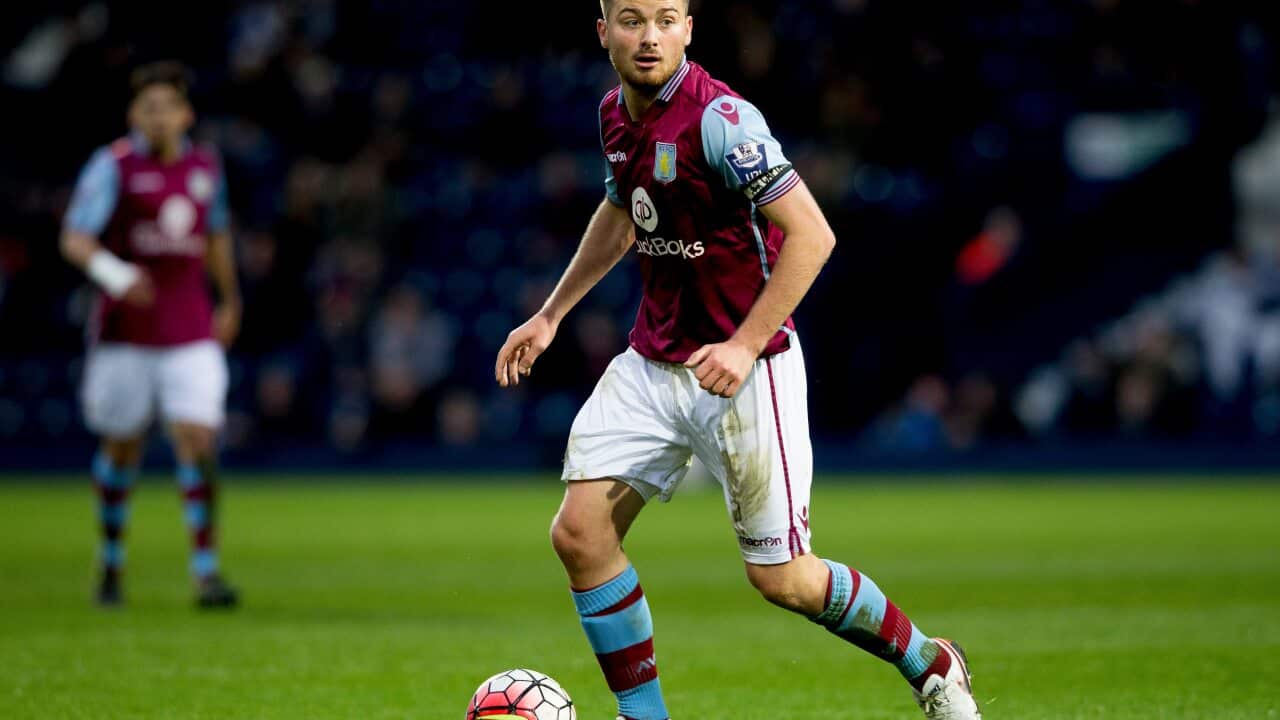 Lyden in action for Aston Villa in the U-21 Premier League against West Bromwich Albion at the Hawthorns on 4 April Source: Getty Images

The 20 year-old midfielder, who has featured on four occasions for Villa in a season of despair for the relegation bound Premier League club, knows that further game time in the final six games of the season can only enhance his hopes of squeezing into the frame for the much-anticipated clash against the Three Lions at Sunderland’s Stadium of Light in late May .

Advertisement
Villa’s Under-21 captain has yet to receive any contact from the Socceroos' hierarchy but believes he may soon be hard to ignore.

“I would love to get a call up but to do that I need to be playing well ... if I am doing that in the Premier League then it might make it difficult for Ange (Postecoglou) not to take a look at me," Perth-raised Lyden said.

“I need show that I am good enough to play in the Socceroos first. It’s been a very successful season on my behalf and while I would like to have played more matches there are still six games to go, so I am ready to play and start those games."

Lyden is an avowed fan of a Socceroos team that has risen to number 50 in the FIFA rankings and is second in Asia's pecking order.

"They have had two good wins in the international break against Jordan and Tajikistan, and the Socceroos are a good team and highly thought of around the world now," Lyden - who played twice for Australia's U-20 team in 2014 - said.

Lyden came off the bench in last weekend’s 4-0 home hammering against Chelsea as Villa – with just 16 points from 32 games – slid closer to their inevitable drop to the Championship.

He has also featured against Liverpool in the league as well at two FA Cup appearances against Wycombe Wanderers.

Combative, relentless and blessed with emerging leadership qualities, Lyden has been hailed by Villa fans as one of the faces of the future as the club contemplates life in the second tier of English football, on a drastically reduced budget.

For all his attributes, Lyden knows that cracking Postecoglou's squad is a mission of attrition, especially in his position where he is up against the likes of skipper Mile Jedinak, the ever-reliable Mark Milligan and Scotland-based Jackson Irvine also pressing hard for a recall.

“There’s not really been any contact with Australian national team … I have just been concentrating on my club football but of course it would be great to be involved,” Lyden said.

“They have talented players based across Europe and also also in the A-League, with the likes of Aaron Mooy and players here like Massimo Luongo while Tim Cahill is showing he's sill got it. Then there are youngsters coming through like Brad Smith and Chris Ikonomidis.

“They have a good group of and hopefully as a country we can just go from strength to strength.

“I just have to concentrate on playing well first and the rest should take care if itself.”

The lure of playing against England in their final warm before EURO 2016 provides an added lustre for Lyden.

"I'd love to play against England, who wouldn't? That would be massive," he said.

“They will be looking to prepare for Euros and the competition for places  will be intense. You just look at the quality they have in their team and it would be a great test for Australia."