A contrite Awer Mabil said he has "learned the hard way" after picking up a controversial red card in his debut for new Danish club Esbjerg against aspiring Australia midfielder Mustafa Amini’s AGF. 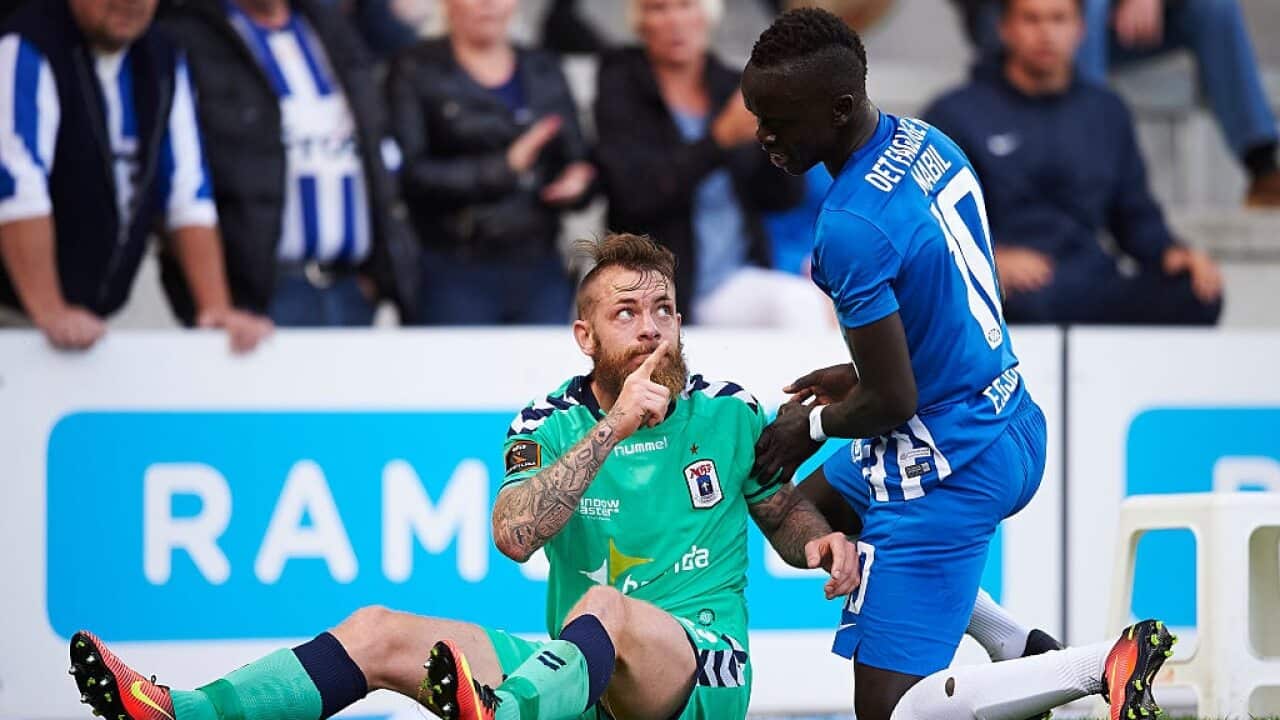 While it was the first sending off of his career, 20 year-old Mabil, who is on a season-long loan from parent club FC Midtjylland, insists it will hopefully be the last, after he reacted to an apparent elbow from AGF’s Martin Spelmann a minute before half-time in a game that ended 2-2.

Advertisement
Spelmann only received a yellow despite initiating the incident, while Mabil got his marching orders to leave his team with 10 men for the second-half.

"I should know better than to react like that, because that’s what he wanted," said Mabil, who now faces an automatic two-game ban unless his club appeals, which seems unlikely.

"He tried to elbow me, we were all over them at that stage and 2-1 up, and I now have to learn from this and make sure not to react again.

"As a young player, it’s not the best thing to happen on your debut, but it’s taught me the hardest way possible.

"But if he was going to give a red, he should have given it to both of us.

"Up to that point we were playing really well… obviously me being sent off killed the game for us a bit."

Esbjerb coach Colin Todd agreed that Mabil had been harshly done by, but told him to learn from the incident.

"He thought it was wrong decision by the referee but like I said I have make sure not to get involved again," Mabil said.

"I think he went out of his way to provoke me. He is apparently known in the league for causing these type of things, and it's normal for him.

"It was the third time in the game he’d pushed and elbowed me, but the referee didn’t see the other incidents.

"He was playing like a soldier more than a winger.

"He was talking to my all the time in Danish but I don’t know what he was saying.

"I just want to come back from this as soon as possible and help the team any way I can … it’s the first red card for me, and it came at the wrong time."

But Mabil remains focused on making a success of his season despite the early setback, playing under a coach who will give him the game time he craves, after just a handful appearances at Midtjylland.

"Coming here is a great challenge for me - I have a great coach who will push me hard and it’s good to be somewhere where I will get the chance to show myself," he said.

"I don’t think there was much difference between me and the other wingers at Midjylland, but that was the coach’s call.

"I am happy to have come here to improve my game. It’s so important for me to play in the next two years and I think I am at the right place to do that.

"Obviously I had a breakout year with Adelaide in Australia, and then signed a five-year contract with Midtjylland.

"I played a bit for the first six months but not much after that, so it was bit frustrating.

"But in some way I have benefited from what has happened … and I thank Midtjylland for giving me an at times not-so-good experience, because it's an experience which will help me in the long term.

"I would rather face that now than later in my career."