Teenage star Marcus Rashford struck again as Manchester United turned up the heat on rivals City with a 1-0 win a keenly-contested derby at the Etihad Stadium. 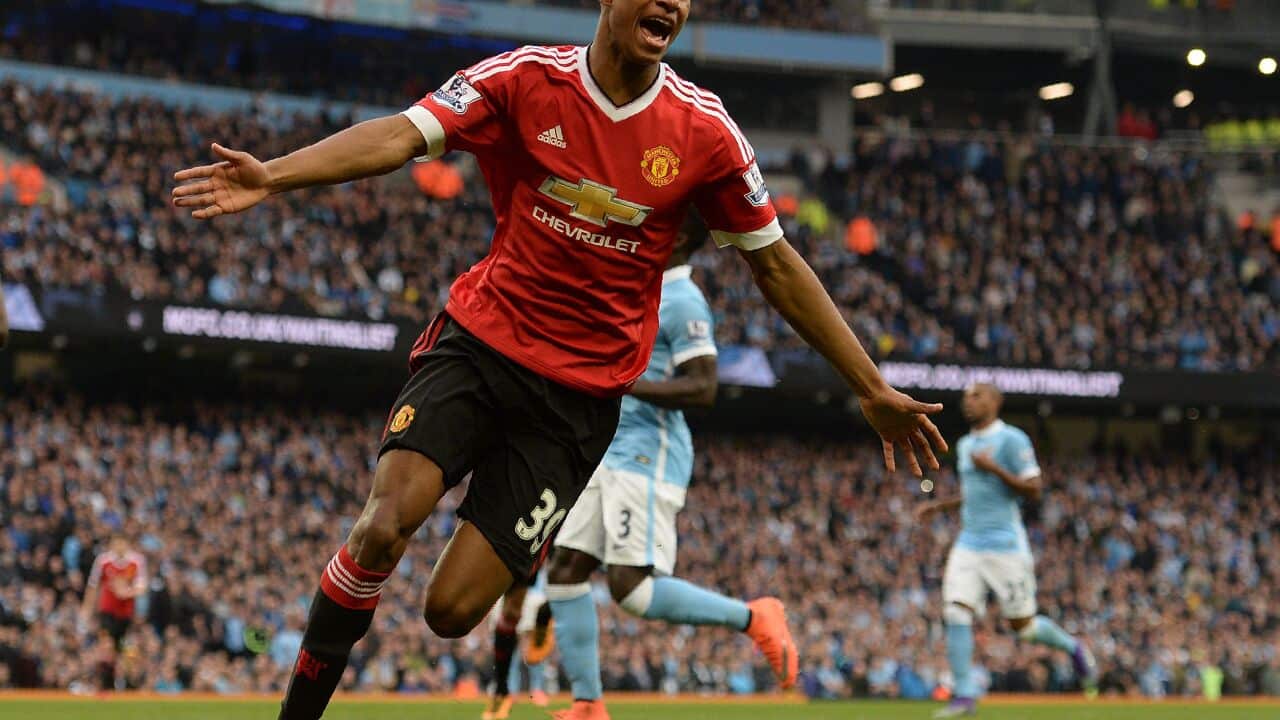 Marcus Rashford celebrates scoring what turned out to be the winner in the Manchester derby. (Getty) Source: Getty Images

Advertisement
Rashford might also have added a penalty to his 16th-minute goal as he ran the error-prone Martin Demichelis ragged and City again cracked under the pressure in their now apparently doomed English Premier League title bid.

Fourth-placed City, who are now just a point ahead of United and West Ham, did rally in the second half but Sergio Aguero missed a hatful of chances to claim a point. Injuries had robbed them of centre-backs Vincent Kompany and Nicolas Otamendi and their absences ultimately proved costly.

The headlines were left with Rashford, who at 18 years and 141 days became the youngest scorer in a Premier League Manchester derby.

The atmosphere was electric and the action frenetic. City made the more positive start with Jesus Navas twice going close, volleying narrowly wide and then forcing David de Gea to save with his feet after some sloppy United defending.

Chris Smalling was booked for pulling back a fired-up Aguero but United quickly matched and then bettered their ferocity.

Juan Mata burst through a gap and slipped in Rashford, who took the ball in his stride and showed a little panache to skip past Demichelis and fire a low shot past Hart.

United might have had another moments later as Martial connected with a powerful shot from distance but Hart saved well.

Demichelis had a chance to redeem himself as he got forward to meet a David Silva free-kick but he headed wide from a good position.

City were forced to take off Sterling with what looked like a groin injury after 26 minutes but Yaya Toure, who pushed forward as a result, went close to an equaliser with a low shot that curled just wide.

Things then started to get a bit heated and even Van Gaal got on his feet to complain after coming together between Aguero and Daley Blind. The pair were to clash again by the corner flag.

The first half ended with two penalty controversies. Firstly as a free-kick was swung into the United box Mangala had his shirt pulled by and Toure felt he was impeded by Carrick as he attempted a shot.

Nothing was given by referee Michael Oliver and he was similarly unmoved when Demichelis appeared to bundle over Rashford just seconds later. United were furious about that decision and tempers were briefly lost in the aftermath.

Demichelis' torture continued into the second half as a poorly hit backpass almost allowed Martial in on goal. To compund matters Hart was injured attempting to clear up the mess and had to be replaced by Willy Caballero.

Demichelis did not last much longer as Manuel Pellegrini hauled him off and sent on Wilfried Bony in the hope of saving the game.

Aguero carried the fight back to United and fired a chance over before heading against the post from a Toure cross and then narrowly missing the target with a curling effort.

Aguero was proving hard to handle and Smalling was lucky to escape a second booking for tripping the Argentinian but he could not find an equaliser, shooting wide again late on.