Central Coast Mariners players upset for desperately unlucky teammate Storm Roux have taken time out to rally around him during their preparation for the F3 derby game against Newcastle Jets at Central Coast Stadium on Sunday. 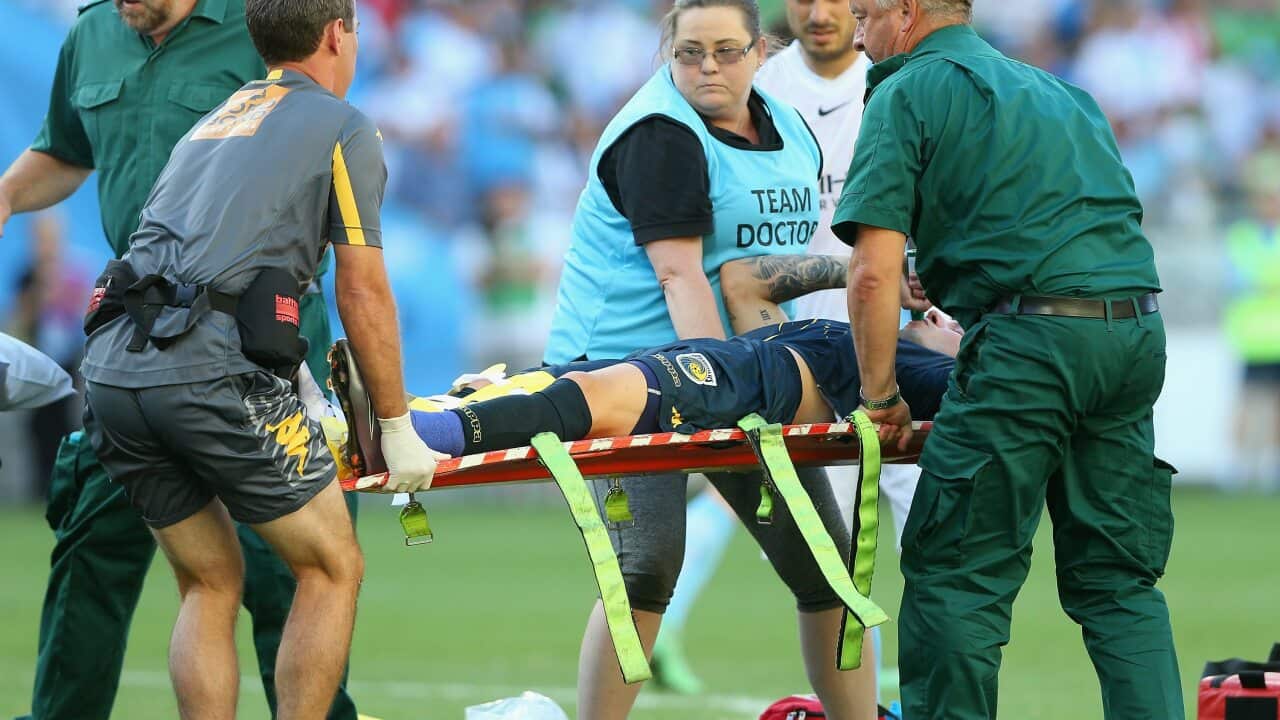 Advertisement
Roux was involved in an incredible incident during the second half of last weekend's game against Melbourne City, when he fractured his right fibula, sustained ligament damage to his ankle and also dislocated his shoulder.

It happened without an opposition player being anywhere near Roux. Video shows him turning to try to block a shot inside the penalty box and his right foot momentarily getting stuck in the ground, with the damage occurring in a apparent lightning chain reaction from there.

The 23 year-old underwent an operation on his leg in Sydney on Monday and will be on crutches for eight weeks. It is anticipated he will progress to the stage where he can engage in full team training again in five months, by which stage the Mariners will be into preparations for next season.

One of Roux's closest teammates at Mariners, Mickey Neill, said the South African-born New Zealand All Whites representative was bravely coping with his situation.

"I've seen Storm a few times since the accident," Neill said. "I managed to get in to see him just before he went in for his operation and a few of the boys caught up with him on Thursday just to see how he was.

"Obviously he's in a bit of pain and just resting us as much as possible, but we took him out to lunch at Terrigal and it was a good experience for us and him.

"He's already being proactive about his recovery and thinking positive and trying to do as much as he can to just rest up and do the right thing in these early stages and get his rehab right and then get in the right mind-frame to start getting ready for next season.

"We all just had a good chat at lunch. He's in good spirits considering what he's been through. He's a bit sore and he can only be out for a little bit, but it was good for him to see the boys and good for us to catch up with him as well.

"It's hard for him to get around because his shoulder is sore as well, but he's had treatment for that and it's all good to start improving now, so that's a positive sign."

Neill was on the sideline when Roux was hurt, preparing to come on as a substitute for another player.

"'Stormy' got injured  and I ended up getting subbed on for him and played right back for the rest of the game," Neill said.

"Storm said his foot got caught in the ground and he felt a snap straight away and knew he'd broken something. He went to grab his leg but he couldn't even do that because his shoulder had popped out. He was in all sorts.

"He's one of my best mates in the team. We're all close as a team, but he's someone I hang out with a fair bit outside of training as well. Fingers crossed he has a quick and safe recovery and gets back to playing again as soon as possible."

The last-placed Mariners' hopes of somehow avoiding the wooden spoon were dealt a massive blow when ninth-placed Wellington Phoenix scored a surprise, 2-1 win over Melbourne City on Friday night. Central Coast are now 10 points behind Wellington.

Neill said the Mariners had to take it game-by-game from here and just try to finish the season strongly.

"We've got seven games to go and there's still something to prove and this weekend is obviously the derby and that's always important to us," he said.

"It's been a disappointing run this season for everyone involved at the club and we need to go out there this weekend and give something back to our loyal fans who have stuck by us. It's a big game for the fans as well as us."