The Matildas might have already seen off the world's most dangerous attack once on Saturday but defender Steph Catley admits taming both Marta and Cristiane won't be so easy in Newcastle on Tuesday, especially when they're out for revenge. 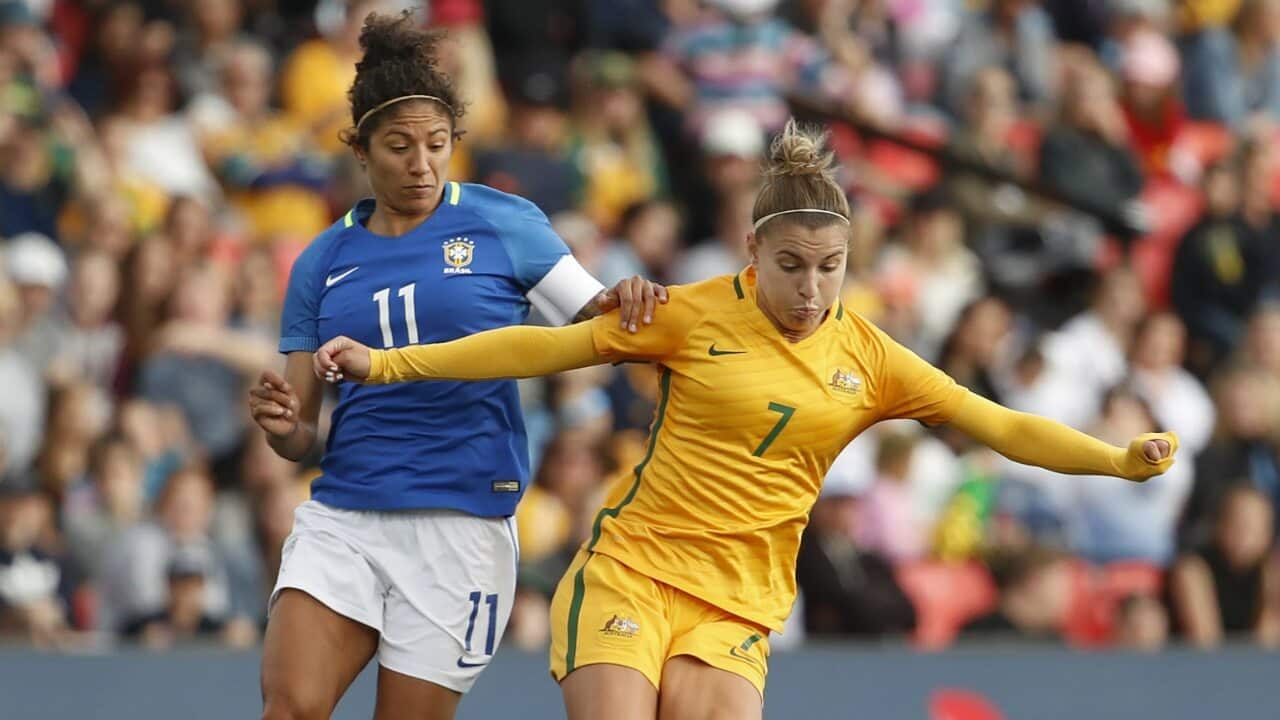 A sold-out crowd of more than 15,000 fans helped the Matildas claim a famous 2-1 win at Pepper Stadium, but there was an element of luck that went Australia’s way as Brazil failed to convert numerous chances.

Knowing they'd missed their opportunity for atone for the shocking 6-1 defeat to Australia at the Tournament of Nations, some Brazilian players exchanged words among themselves after the final whistle.

While Australia are seeking to make it a hat-trick of wins over the famous football nation, Catley is adamant it would be foolish to think Australia will get the same breaks again at Hunter Stadium.

"They’re a world class team with so many good players and you know when you go into a game against Brazil, they’re going to create opportunities and they’re going to be amazing on the ball," Catley told The World Game.

"On Tuesday, we’ll have to stick together as a team and give them as few chances as possible. Fortunately in the first game we were able to stick to our plan and get a couple of goals for ourselves, which made all the difference."

The Orlando Pride and Melbourne City star was part of a back four that didn’t always get it right on Saturday – something she freely admits.

"I think we were good at times but we probably weren’t as consistent as we usually are, which is something where we need to improve," Catley said.

"We let them have a few clear chances and some decent shots, so there’s a few things we need to tie up before the next game.

"You can’t stop them entirely because they have such class players and will always create opportunities. You just have to limit the damage they can do."

Catley, 23, was tenacious all game at left-back, demonstrating her unforgiving approach with a pair of bruising first-half tackles that set the tempo for a game that grew progressively more aggressive as it wore on.

"It’s definitely fair to say it got a bit heated. There was some pretty physical stuff out there and I think that’s just because there’s a real history between the two teams," she said.

"We’ve caused each other some heartbreak in recent times - especially at the Tournament of Nations [Brazil lost 6-1 to Australia] and when we play each other, you know it will always be just that little bit more fiery than usual.

"Both teams love the contest and love to win even more."

The crowd loved Catley’s no-fear approach and she acknowledged the wave of support coming from the stands was something she’d never seen before during her 61-cap career.

"It was unbelievable. Even driving into the ground, when there big flocks of people lining up to get into the ground – even before the warm-up – was just unreal," she said.

"It was unlike anything I’ve seen before in Australia. For them to come out and be as loud as they were and as passionate as they were, I can’t explain how much it means to us.

"It would mean everything for us to have another big crowd in Newcastle. Not only because of what it mean for women’s sport, but because seeing so many thousands of people cheering and screaming was the support that helped us get over the line."

Over 11,000 tickets had already been sold for the second match by last weekend and despite the midweek time slot, there's every chance the crowd number achieved in Penrith could be broken again.

While Australia’s two goals on Saturday – a screamer from Lisa De Vanna and a brilliant, reverse header from Sam Kerr – were replayed around the world, Catley had a sense of deja vu as both strikes found the net.

"It was such a crazy, unbelievable goal but it’s weird that I’ve come to expect that from Lisa. When it happens, I’m like 'Yeah, I’ve already seen her do that in training'," she said.

"She’s a freak and is regularly scoring 'worldies' in the NPL in Victoria.

"And now it’s such a common thing from Sam, almost every game in America, she’s scoring. The fact that they can both repeat those deeds at international level just shows their class.”