Matildas out to defend Tournament of Nations crown

The Matildas will be out for a repeat of their incredible breakout performance from twelve months ago when they return to the United States to defend their Tournament of Nations Crown in July. 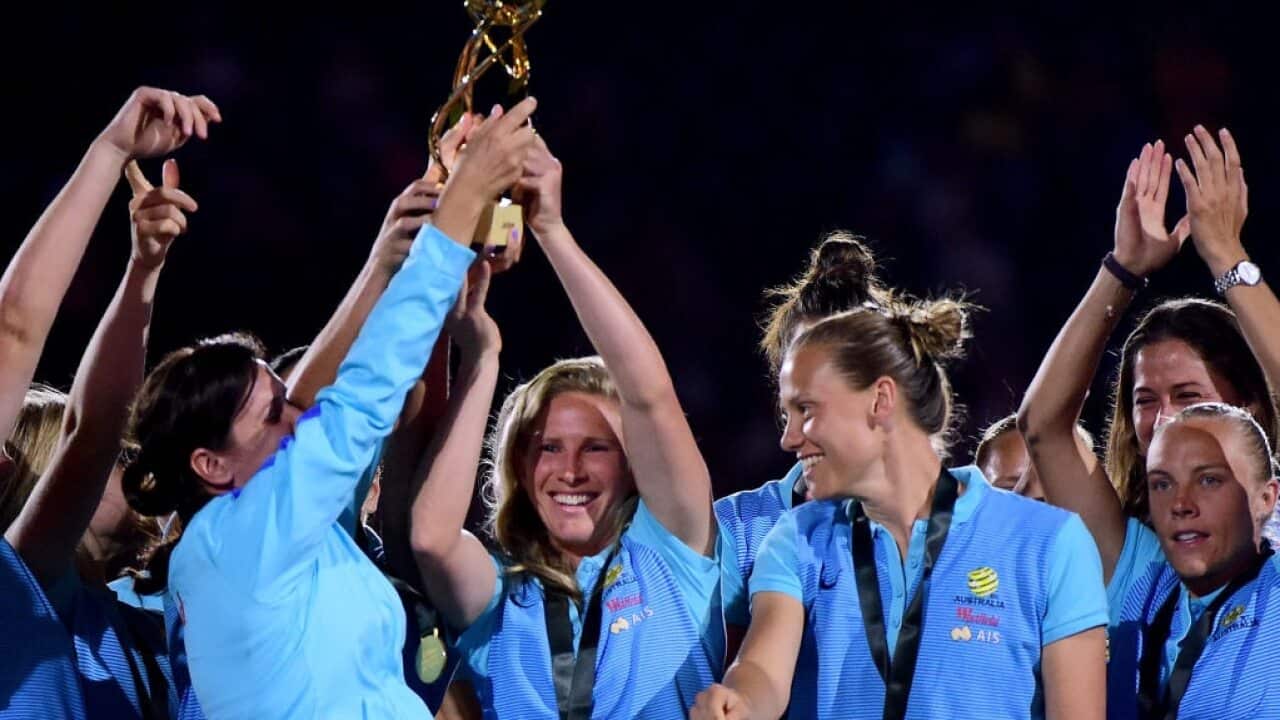 The Matildas will be looking to lift the Tournament of Nations trophy again when they return for the 2018 event in July Source: Getty Images

Australia clinched the tournament title in 2017 with impressive wins against Brazil, Japan and the United States.

Children's Mercy Park in Kansas, Pratt and Whitney Stadium in Connecticut and Toyota Park in Illinois will be the venues for the USA hosted event with Japan and Brazil also taking part.

The four teams will play double-headers at each site, with the winner decided on points. Overall goal differential and total goals will act as the first tiebreakers.

The Matildas were undefeated during the 2017 edition of the event including a historic first ever win against the United States.

Sam Kerr scored an incredible four goals at the tournament including a hat-trick in Australia's 4-2 win against Japan.

A 6-1 win against Brazil in The Matildas final match wrapped up a breakout tournament for Australia and catapulted them to fourth in the world rankings.

This year's tournament will act as a warm-up event for the 2019 Women's World Cup in France after the Matildas secured their spot with a second placed finish at the 2018 Women's Asian Cup.

It will also be their first rematch against Japan since their loss in the Asian Cup final.

Japan and Brazil have also qualified for the World Cup, while USA will attempt to qualify when they take part in the CONCACAF qualifying tournament in October.

For the United States, the tournament is a tuneup for World Cup qualifying this fall. Australia, Japan and Brazil have already booked spots among the field that will play in next summer's women's World Cup in France.

"Friendlies are important, but there's nothing like the competitive format these tournaments provide us. Australia, Brazil and Japan are three very different teams that challenge us with their respective styles and personnel and it will be another fantastic tournament for our fans to watch," U.S. coach Jill Ellis said in a statement.