Western Sydney Wanderers striker Brendon Santalab is the latest subject of a regular feature where The World Game has a bit of fun with the game's stars by asking them questions they wouldn't normally be asked and letting their personalities shine. 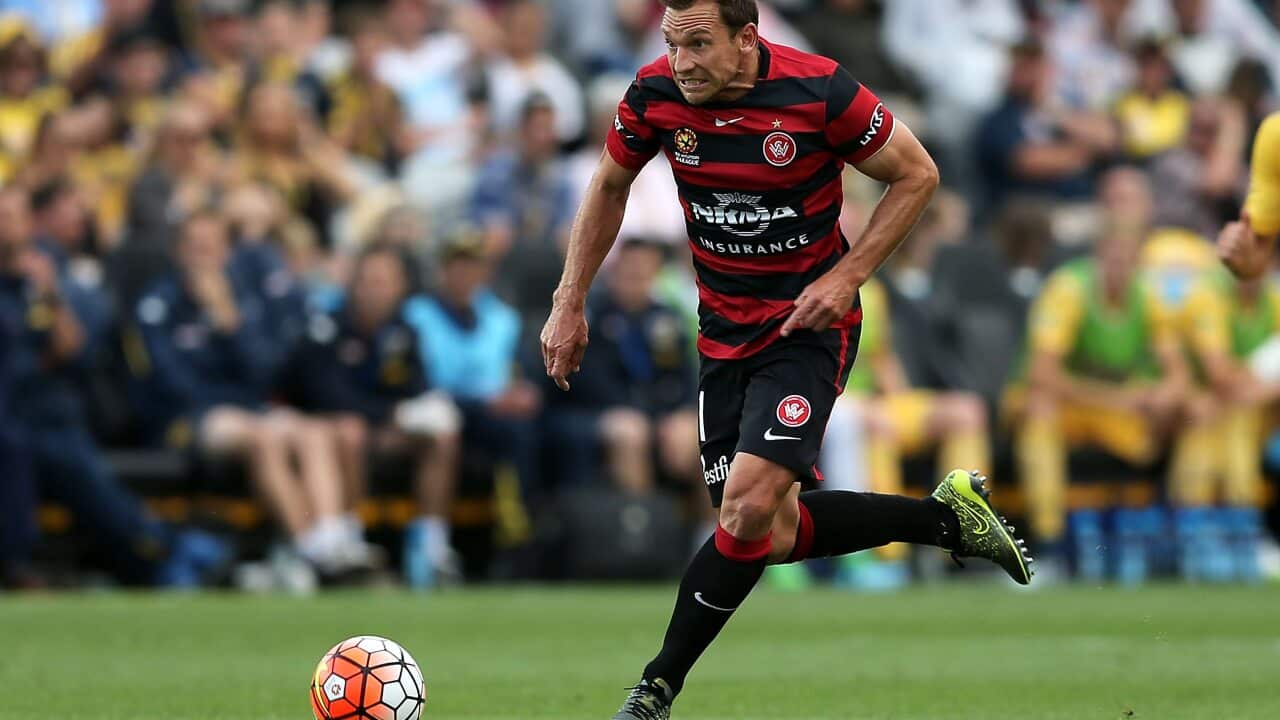 TWG: You've got the nickname "Santa", so this has got to be your time of year, hasn't it?

BS: (Laughs). Hopefully it will be that way against Newcastle on Christmas Eve. A few goals would be great - that's exactly what I want!

TWG: You got a goal in the 2-2 draw against Perth on Saturday, so it's shaping up well for a good Christmas week.

BS: That was like an early Christmas present. It was great to start the game, I hadn't started for a long, long time due to injuries last season, and to start and score, and for us to twice come back from a goal down was encouraging.

TWG: It's the easiest nickname in the world as a natural shortening of your surname. Is there anyone who doesn't call you Santa?

BS: Everybody calls me Santa and at this time of year it's a bit of a laugh and a joke for me and I just roll on with it and enjoy it. I can't complain about a nickname like Santa - especially at Christmas time!

TWG: So what would you like for Christmas, apart from a win and a goal or two on Christmas Eve?

BS: I'm normally one who loves getting clothes at Christmas, so hopefully that's in my presents somewhere.

TWG: You're a bit of a snappy dresser are you?

BS: Ever since I met my girlfriend, Stephanie, my dress sense has been a lot better apparently. That's the feedback I'm getting from my teammates. I'm a bit into the clothes now so I'd like to get some for Christmas.

TWG: Where will you be on Christmas Day?

BS: I'll be down in Wollongong with my family. Stephanie will be here in Sydney with her family and we'll get together on Boxing Day.

TWG: Do you have to buy a lot of presents? Is there a lot of family?

BS: Normally as a family we do Kris Kringle and we're doing that again this year, but I've gone all-out and bought for the whole family this year and they're not aware of that. I'm really excited for this year, to hand out all the presents. It should be a nice surprise for the family, because nobody is expecting it.

TWG: Should I mention that? It's going to blow your cover if it gets out there!

BS: Yeah, go ahead, Santa felt generous this year! I felt like spoiling the family. We've been doing Kris Kringle for quite a while and I just felt like it was a good time to give generously. Hopefully I won't have to do it every year now!

TWG: Do you put a bit of thought into it or do you just play it safe and buy gift vouchers?

BS: I do put a lot of thought into it. It's not about how much you spend, it's about the thought and I think people appreciate that more. I'm definitely one to think about what someone would like as a present rather than just buy a boring gift voucher.

BS: My first overseas experience was in Singapore and I really enjoyed that. The people welcomed me with open arms and made my first overseas trip one that I'll remember for a long time. I scored lots of goals. It's not the strongest league in the world, but the way the people are and the way the country is run, for me it was a big eye-opener and from there I went on to bigger and better things in my career.

TWG: What's the weirdest thing that has happened to you in your travels?

BS: It would probably be with the Wanderers in China for a big Asian Champions League when someone was driving a mini-van down the freeway and decided to turn in to our bus. Just as a country and the city of Guangzhou as a whole, they tried to stop us from winning the game any way they could. For me, that was the most bizarre experience.

TWG: You guys had no doubt that wasn't an accident, didn't you.

BS: No, it was 100 per cent deliberate. There was no question about that.

TWG: Do you feel like Wanderers is the home you've always been looking for?

BS: Yeah, I really feel at home at the Wanderers. I've been here three years and that's the longest time I've been at any club throughout my career. It's been a staggered career, with some injuries, and I'd like to think I'm finally over that injury hurdle. I feel great now. We've achieved a lot in the last few years at the Wanderers and I'm still hungry for a lot more success.

TWG: Where in the world that you haven't been would you like to go, and not necessarily for football?

BS: Definitely Italy. I've always loved Italy and wanted to go there, ever since I was a kid. It's high on my wish list and hopefully I'll be able to visit there soon with my girlfriend.

TWG: What is it about Italy that you like?

TWG: What is the best advice you've got for young players coming through?

BS: I think it's to have a level head and work hard. You see a lot of players when they're 17, 18 or even 19 do very well and then fade out of the game and I think it's because their attitude and their character is lacking. Some players think too early that they've made it and that's definitely not the way to think. Along with ability you need hard work. Your best chance to make it as a footballer is to zip it and work hard and that's probably the best advice I could give to younger players coming through.

TWG: On your day off do you hang with the players or go it alone?

BS: We all live in separate parts of Sydney. We're all pretty much spread out. When we have an opportunity we have a coffee sometimes, when we're close by, but normally it's about hanging out with my girlfriend and getting things done on my day off that we have to catch up on.

TWG: Are you into music, or movies, or reading, or any other particular interest?

BS: Yeah I love music. I'm constantly listening to music. The '80s and '90s are my favourites.

TWG: So you like a bit of retro. What are your favourite bands?

BS: Oh, look, I don't really have a favourite, I'm just a general music lover. When a song comes on the radio I'll often know all the words to it. I'm not one to remember the names of songs in particular, but I'll know the words.

TWG: What has the Spanish invasion been like at Wanderers, with several players and an assistant coach all coming across for this season?

BS: It's been a great influence on our success so far this season. I think the Spanish footballers are known to be technically superb and hold possession of the ball and if you look at the way we play now it's definitely a Spanish style. And the rest of the players have gelled very nicely with the Spanish imports. Everyone has bought in to what 'Popa' (coach Tony Popovic) wants.

TWG: What sort of guys are the Spanish players?

BS: Oh, fantastic guys, true professionals, and I think it's always important that when the foreign players come here they set a standard for the local players to try to reach. I think that's what bringing the foreign players in is all about. Even when I was overseas playing in China you had to be better than the locals and the Spanish boys have definitely stepped up this year.

TWG: Have you picked up a bit of Spanish?

BS: Yeah, a little bit. All good words, the boys are pretty good guys and it's all positive.

TWG: Finally, there is still a long way to go this season, but it's been a fabulous first 11 rounds for Wanderers. How excited are you about the potential for the team to do something special?

BS: Look, we set ourselves high standards and we're where we want to be at the moment and we want to be there at the end of the season as well. There's no hiding that we've improved out of sight from last season and there's no reason why we can't go on and chase the title this season. We have great depth in our squad as well this season and no Asian Champions League to deal with either. We're in a great position after 11 rounds, but there's a long way to go and football can change very quickly, so we're very excited to be where we are but with 16 rounds to go we need to be even better than we've been so far to take the title.