In his eighth Giro d'Italia and his 140th stage at the Italian Grand Tour, Giacomo Nizzolo (Qhubeka-ASSOS) finally cracked the victory he's been searching for all his professional career. 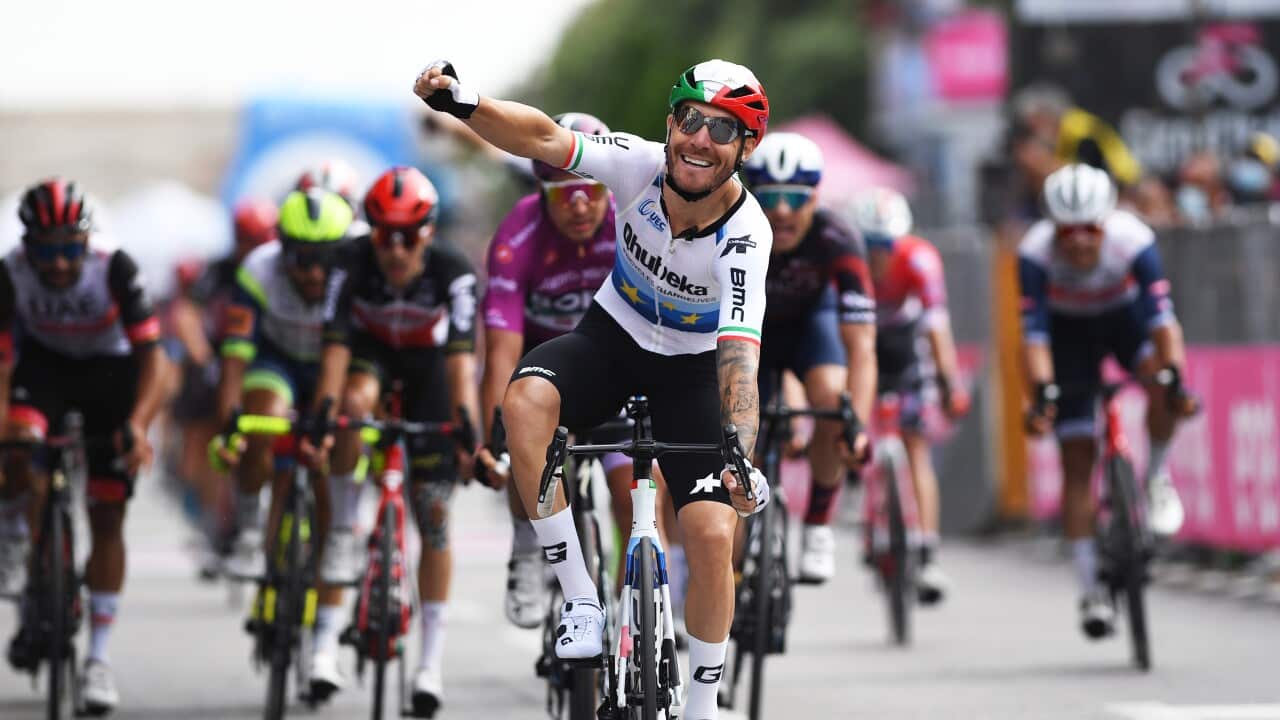 After 33 top-5 finishes, including 11 runner-up finishes and two points jerseys at the Giro d'Italia, it was finally the moment for Giacomo Nizzolo to win a stage of his home Grand Tour.

Nizzolo had to launch his sprint early to overcome a late attack from Eduardo Affini (Jumbo-Visma) slipping in and springing out from his countryman's slipstream to take his maiden Giro victory.

Affini hung on for second, with Peter Sagan (BORA-hansgrohe) in third and hanging onto his lead in the ciclamino points jersey.

Advertisement
"My goal this morning was to be second, maybe this was a trick to get the victory," laughed Nizzolo. "Of course, I'm super happy. The only goal I had today was to sprint and not get blocked in the final so I went quite far in the wind - but I had good legs and it worked out.

"It means a lot. I don't think my value has changed because of victory in the Giro but obviously, it's nice so I will enjoy it."

The Italian sprinter has been in excellent form over the past few years and had been a bit unlucky to run into a rampant Caleb Ewan on Stage 5 earlier at the Giro and not already have a win at this year's race on the books.

"I felt so much confidence from the team today, they were always around me, not only today but throughout the week," said Nizzolo. "So I am really happy to give them this victory as it is not only mine but for the whole team, for the purpose we race for, bicycles change lives."

The 32-year-old cracked the win on a mostly uneventful Stage 13 of the Giro, a 198-kilometre flat route from Ravenna to Verona.

Samuele Rivi (Eolo-Kometa) and Umberto Marengo (Bardiani-CSF-Faizane) jumped clear to form the early breakaway, joined soon after by Simon Pellaud (Androni Giocattoli). The break reached a maximum lead of seven minutes and 35 seconds with 150 kilometres to race but the sprinters' team kept them under control, each placing a rider on the front to share the work.

The break were eventually caught with seven kilometres remaining in the race and the sprinter's trains got into action before Affini launched his attack with 700 metres to go and it took an early jump from Nizzolo to chase him down just ahead of the finish.

Egan Bernal (INEOS Grenadiers) finished in the bunch to secure another day in the leader's pink jersey with the summit finish atop the Monte Zoncolan looming at the end of tomorrow's stage.

"It was nice to have a day to rest up after all the hard racing we've faced," said Bernal. "From now on there's nothing but hard stages to come."

"It'll be the first long hard climb we do in this Giro. I'll be happy if I can keep the maglia rosa. It'll be a hard stage for sure. I'm sure there will be a big fight."

The Giro d'Italia continues with Stage 14, a 205-kilometre stage that starts in Cittadella and finishes on the infamous slops of the Monte Zoncolan. Watch all the actionf rom the feared climb with Matt Keenan and Robbie McEwen in commentary from 1920 AEST on SBS OnDemand and 2120 on SBS VICELAND.