ANALYSIS: Fortune favours the brave, they say, and Bert van Marwijk's Socceroos showed plenty of bravery in their international match against Colombia. 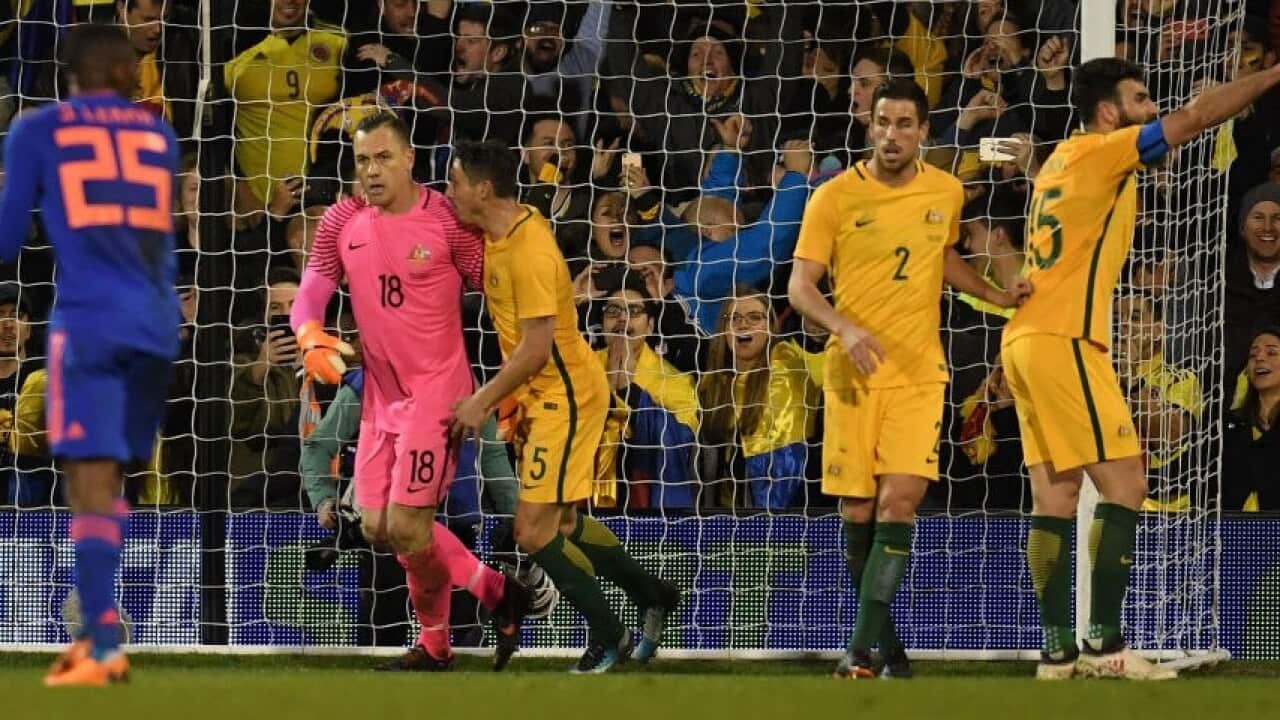 They also showed they can play a bit too, especially when that master craftsman Massimo Luongo gets involved and starts making things happen in the front third.

Australia showed a vast improvement on their horror show in Oslo, where they got thumped 4-1 by modest Norway, to earn a creditable - if somewhat fortuitous - goalless draw with highly rated Colombia in London.

Van Marwijk's men more than held their own in the first half and rode their luck in the second period to register a morale-boosting result in front of a boisterous pro-Colombia crowd at Craven Cottage.

After their Norwegian debacle, few people gave the Socceroos any chance against the gifted Colombians who scored an astonishing 3-2 victory over France in Paris only last week.

However this Socceroos side has its weaknesses - some of them are glaring - but the players' pride and determination have never been brought into question.

And it was the same against 'Los Cafeteros' when the Socceroos, with five changes in the starting line-up, looked marginally the better and more cohesive team in the first half.

Van Marwijk spoke about the importance of the proper use of space in his first press conference after being given the national job.

And it was space - or rather the lack of it - that enhanced the Australians' prospects against James Rodriguez and company.

The Craven Cottage pitch is not one of the widest in world football and it appeared that the Australians sought to make it even smaller by being compact and tight and refraining from using the whole width of the pitch with long cross-field balls.

Short, crisp passing was very much the order of the day and it worked a treat because the more gifted Colombians were given little time and space to produce their technical superiority. Luongo and Tom Rogic revelled in the tight spaces.

In the second half Colombia redressed the situation by stepping up their rhythm and stretching the Australians on either side. They penned their opponents in their own half for long periods.

Australia's back four department looked more cohesive than it did against Norway, and Colombia did not really make any headway in the air but the green and gold were punctured several times by crosses from either side.

They hit the post twice, missed a couple of simple chances, had a goal disallowed for a marginal offside and even saw debut boy Danny Vukovic save a late Miguel Borja penalty the goalkeeper himself conceded to the same player.


How the Palmeiras substitute did not get a hat-trick will remain a mystery. He must have been the closest challenger to Luongo to being named Australia's best player!

Luongo, who plays his club football at nearby Queens Park Rangers, felt right at home at Fulham's ground.

He underlined his skill and importance to the side with an impressive performance full of positivity and creativity that would have been remembered for years to come had he found the net from a superb solo run in the second half.

He beat three men with consummate ease in the penalty area but his firm shot was too central and it was saved by a grateful David Ospina.

Ironically, two men who scored arguably the finest two goals at the last FIFA World Cup in Brazil - Rodriguez and Tim Cahill - played a part in the match.

All up it was an encouraging performance and already one can see that van Marwijk's pragmatism is beginning to show in a team that is playing to its strengths.

There is no use employing open attacking tactics against the world's quality teams because you are more likely to lose than win.

We are no Germany or Brazil, after all.

It is significant to note that the Socceroos were much more in the game when they kept it tight and made the pitch smaller in the first half than when they tried to open up the field in the second.

It's the importance of space, as van Marwijk would say.

After watching van Marwijk's first two matches I get the feeling that the way Australia played in the first half against Colombia will be the style template for the Socceroos at the World Cup in Russia.