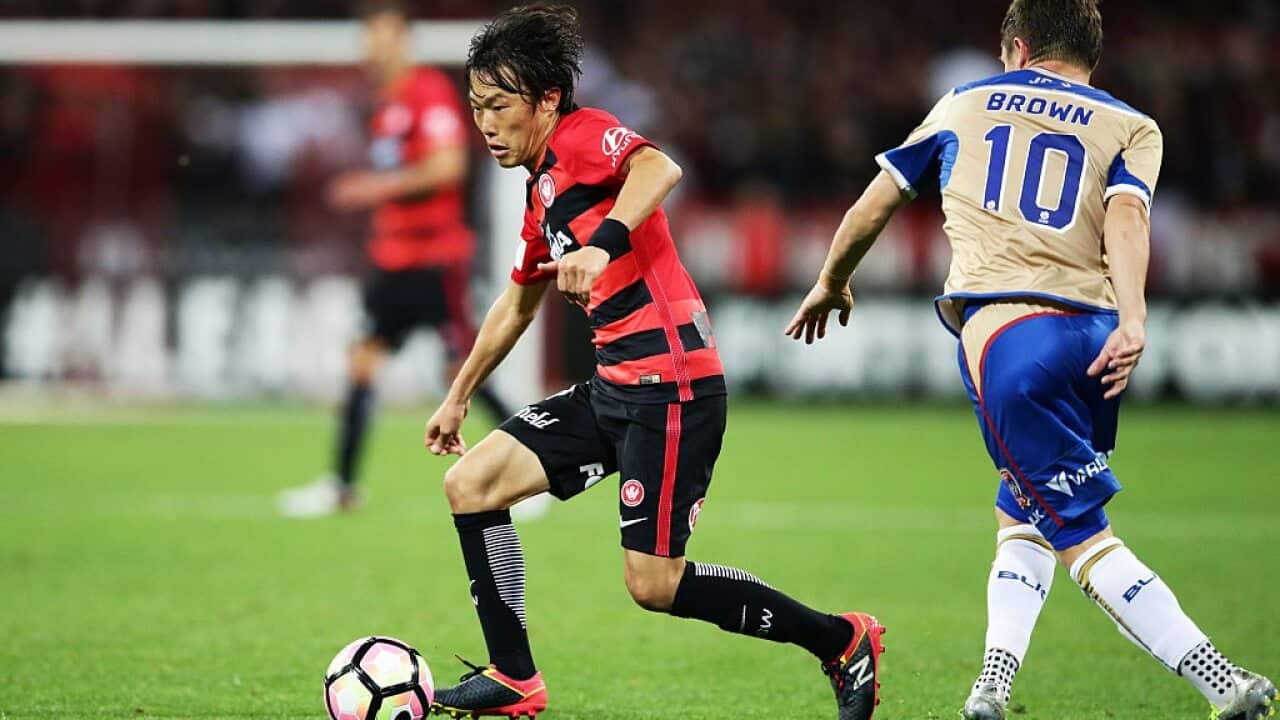 Jumpei Kusukami during the Wanderers' round three clash against Newcastle Source: Getty Images

Kusukami said he always idolised Ono, who was a fan-favourite at the Wanderers, and was happy to follow his lead in joining the club.

Ono was key in helping Western Sydney achieve immediate success from the beginning of their A-League journey in 2012.

Advertisement
During Ono’s two seasons in the red and black, the club lifted the Premiers' Plate and qualified for two grand-finals.

He was also man of the match in his last appearance for the Wanderers in May 2014.

Led by Ono, Western Sydney overturned a 3-1 first-leg deficit against Sanfrecce Hiroshima to reach the quarter-finals of the AFC Champions League – a competition they would go on to win six months later.

But it wasn’t Ono's last contribution to the club.

Since joining the Wanderers, Kusukami has dazzled fans and players in the opening three rounds and said it was Ono who convinced him to come to the club.

"He said it would be a very good experience," Kusukami said.

"That was what he said to me in person. That was a very big factor in me making the decision to come."

Ono also shared his praise of the Wanderers with his agent, who also manages Kusukami.

The 29-year-old is playing outside of Japan for the first time in his career.

Unlike many foreign imports, who struggle to handle the physicality of the A-League, Kusukami has made a seamless transition.

And in a warning to the rest of the competition, Wanderers assistant coach Andres Carrasco believes the best is yet to come.

"Jumpei still has something else to offer, after January and February we will see the real Jumpei," Carrasco said.

"I think maybe he can improve by 25% during the season."

The former Barcelona academy coach has been instrumental in Western Sydney's transformation from a direct counter-attacking team, to a side that plays possession-based football.

Providing the likes of Kusukami, Mitch Nicholls and Nico Martinez the space to work their magic will be key to the Wanderers achieving success this season.

"Hopefully we can give them the right situations because we try to play out from the back," Carrasco said.

"As soon as we get better in our game they will receive better balls to really hurt teams."