It was a tale of two penalties, an own goal, two goal droughts ended and a goal of the season contender as Adelaide United hammered Brisbane Roar 4-1 at Suncorp Stadium. 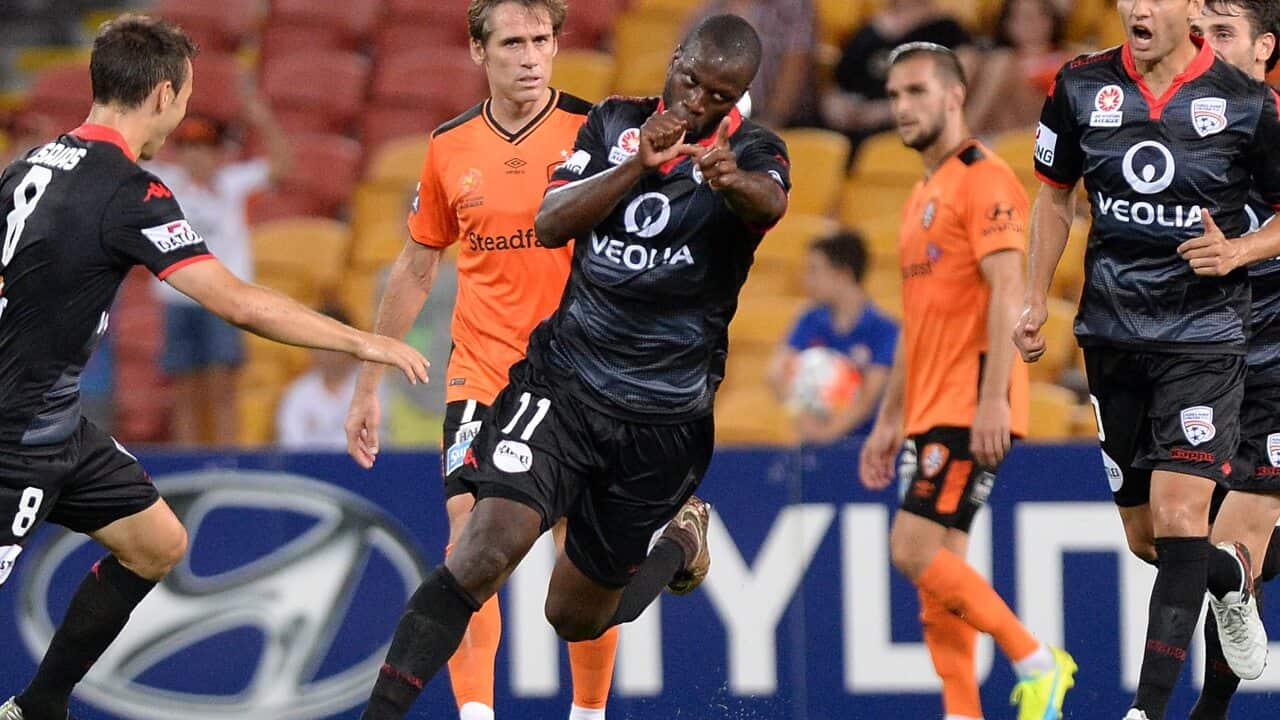 Bruce Djite broke a 22-game drought in front of goal from the spot, one which stretched back to round 18 of last season against Western Sydney Wanderers.

It was Adelaide's second goal and Djite's first and it wasn't without controversy. Jack Hingert was adjudged to have fouled Dylan McGowan - it certainly looked harsh.

Advertisement
When it rains, it pours - Djite added a second just after the hour mark, profiting from some slack Brisbane play in midfield to put the game out of the Roar's reach.

A late worldie from Marcelo Carrusca iced the cake, as Adelaide made it eight games without defeat, while Brisbane conceded four goals in back-to-back matches.

All this after an own goal by Corey Brown, after a wonderful run and cross by Craig Goodwin, surely in career best form, put the Reds ahead against the run of play early in the match.

Djite's double came after Henrique broke Brisbane Roar's own barren spell, 259 minutes without a goal, with a penalty won when the striker looked to have fallen over his own feet rather than those of Isais.

Referee Jared Gillett saw it differently and pointed to the spot, and Henrique made no mistake from 12 yards. At the time, 50 minutes in, it was an equaliser, but it seemed a long time ago by the time the full-time whistle was blown.

Adelaide got off to a decent start and Djite was only denied an early goal by the alert intervention of Michael Theo, recalled to the Brisbane goal in place of the hugely unlucky Jamie Young.

Djite had a penalty shout when he went down under pressure from Daniel Bowles - it was waved away, seemingly the only appeal to suffer that fate all night.

Brisbane however began to control the tempo, depsite going a goal down when Brown could only bundle the ball over his own line under pressure from Pablo Sanchez.

A delightful touch from Thomas Broich gave Henrique the chance to shoot but his shot was deflected straight at the fit-again Eugene Galekovic.

Roar headed to the break with 66 per cent of possession but nothing to show for it, and their second-half performance would have given coach John Aloisi even more to worry about.

They are now three games without a win, have conceded eight goals in a fortnight, and could be knocked off the top of the table by Western Sydney Wanderers tomorrow.