Paris-Nice 2020 was the strangest race Matthew Keenan has ever experienced. Hugely entertaining on the one hand, pretty weird and scary in terms of potential coronavirus consequences, on the other. 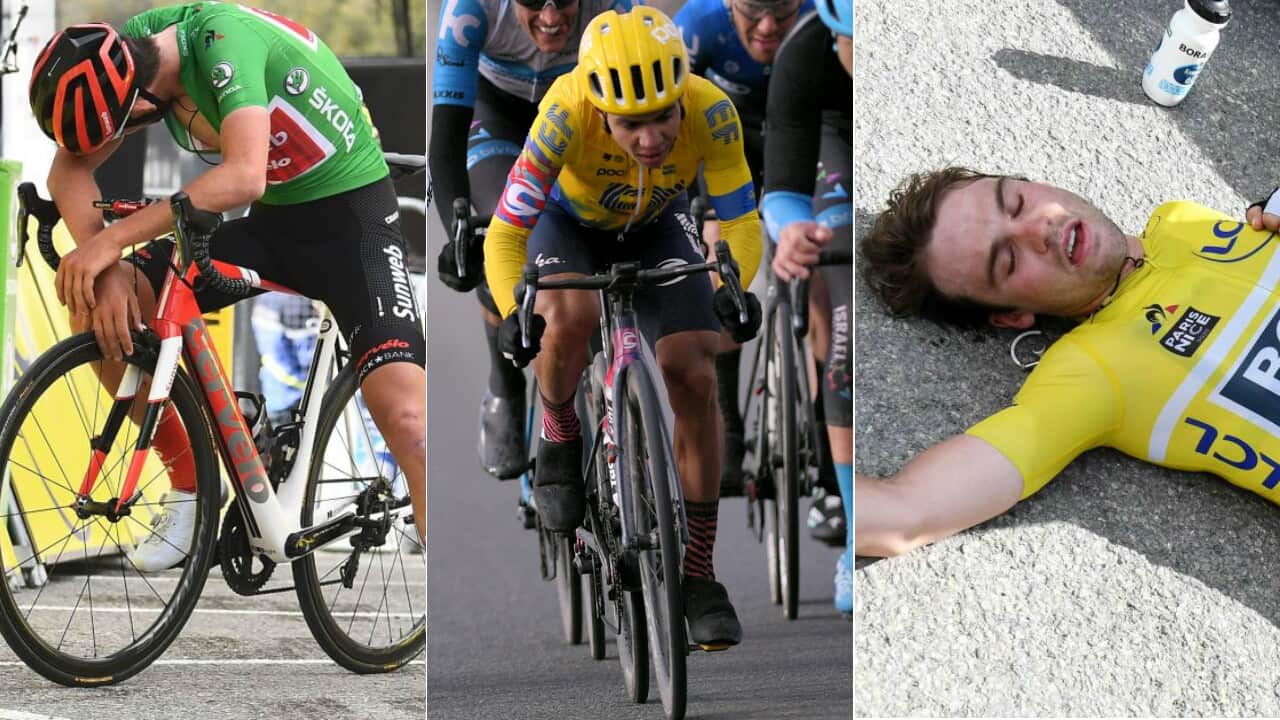 Matthew Keenan breaks down Paris-Nice 2020 for us a strange but entertaining race Source: Getty

That was the strangest atmosphere I’ve ever experienced at a race.

Due to the coronavirus, seven WorldTour teams decided not to start and by Stage 2, there were no spectators allowed at the start or finish. It was the Tour of Qatar with trees and a prestigious honour roll.

On the morning of Stage 3, Jasper Stuyven (Trek-Segafredo) declared 90 per cent of the peloton thought they wouldn’t reach Nice.

Advertisement
They were right.

Every stage was contested as if it could be the last. And I went to bed each night unsure if I’d have a race to call the next day.

During the race, Italy was shut down, the NBA season was suspended, the Giro d’Italia postponed, Spanish, Belgian and Dutch races cancelled, likewise the Melbourne F1 Grand Prix and the French government announced the closure of its schools and universities.

But Paris-Nice - perfect for spreading a virus - going from town to town, travelling across the country, was not stopping.

The reality of the coronavirus outbreak at Paris-Nice 2020 Stage 6 Source: Velo

Thankfully the final stage was cancelled and the race ended with a mountain top finish on Stage 7.

If I got the virus I'm confident I’d be fine. But what if I passed it on to my dad? He’s 82 and had open heart surgery six weeks ago. I don’t want to take that risk. Not for my dad or anyone else’s loved ones.

Cycling, like every sport and many industries, is now in a very difficult spot. No one knows when the next WorldTour race will happen.

The coronavirus could be the death of some second tier races. That’s terribly unfortunate. It’s also going to hurt financially for a lot of us who work as freelancers in cycling. But the greater community health is more important.

For the riders it must have been hard to stay motivated. The difficult situation revealed a lot about Maximilian Schachmann, Sergio Higuita and the entire Sunweb team.

If the race completed the eight stages and the seven other WorldTour teams were on the start line I don’t think Maximilian Schachmann (Bora - hansgrohe) would have won. But he couldn't control that. He dealt with what was in front of him and made the most of the same opportunity the other 136 riders were presented with.

He laid the foundations on Stage 1 by jumping across to Alaphilippe and Tiesj Benoot, on a wet cobbled climb. It was impressive.


With the help of Peter Sagan, he then extended his lead on Stage 2 in the crosswind, where again the rain didn’t dampen his morale. He was making the most of every chance to build his lead.

And second in the Stage 4 invidivudal time trial. There are no lucky riders in a time trial.

Then with limited teammates he fought for his survival on the final two stages, including finishing alongside Nibali at the top of a 16km mountain on the last day.

I don’t think he can win a grand tour but he was a deserving winner of Paris-Nice.

Seeing Sergio Higuita (EF Pro Cycling) in a select group of climbers is to be expected. The 22 year old, Colombian champion, is a natural in the mountains.

It was in the echelons that he really impressed. He formed a big brother, little brother tandem with Sep Vanmarcke, reminiscent of Chaves and Hayman, and was at the front of every split in the crosswinds.

At 166cm, his head was at the hip of many of the classics specialists in the front group - Mads Pedersen, Jasper Stuyven, Peter Sagan - but he was matching them pedal stroke, for pedal stroke.


“Thankfully I’ve gained experience from racing on the track, which has meant learning how to race really close to people”, he said. The velodrome has served him well.

Third overall and winner the best young rider classification. He can win a grand tour.

Sunweb lost Tom Dumoulin in the transfer season. It might have made the team a stronger unit, highlighted by their support of Tiesj Benoot.

He got off to a solid start with third on Stage 1, from a breakaway with Julian Alaphalippe. A new recruit to the team, his status was tested on Stage 2 when he missed the crucial split. Sunweb had six guys in the front group, including Michael Matthews. They all waited for Benoot.

On every road stage they moved together on mass. In the sprints Matthews supported Cees Bol.

Then, on Stage 6, they delivered a piece of teamwork that would seem fanciful in a cycling textbook.

Nikias Arndt was the first to breakaway. The team sat and watched others chase. With about 35km to go Soren Kragh Andersen, at that point second overall, attacked. He caught Arndt, who buried himself. Andersen was soon the virtual race leader.


The peloton slowly reeled him back in. But before he was caught, on the second last climb, Benoot attacked. Nibali followed briefly but was promptly dropped. Benoot hooked up with Andersen, who buried himself. Benoot was alone, in front, but getting stage winning support from behind.

At the front of the peloton Matthews foiled the chase. No one moved without the Australian breathing down their neck. Benoot won the stage, Matthews second.

The team was just fine post Marcel Kittel and John Degenkolb and they will be, again, post Dumoulin. It was the performance of a sophisticated band of brothers.