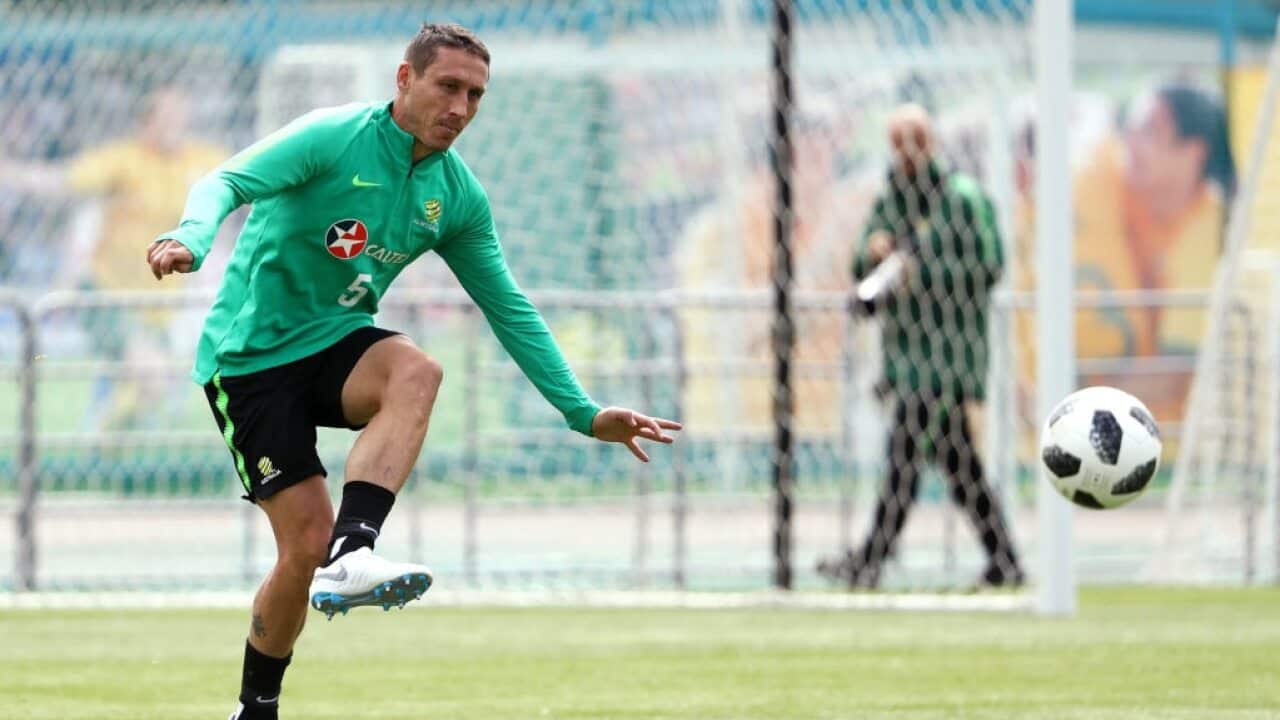 The tournament in Russia is Milligan’s fourth FIFA World Cup with the 32 year-old matched only by Tim Cahill as the only Australian player to go to every World Cup since 2006.

A regular in the Australia team since he was given a shock call up by Guus Hiddink in 2006, Milligan’s versatility has led several Socceroos coaches to use the central midfielder as the team’s Mr Fix-It filling gaps all across the park.

However, new gaffer Bert van Marwijk has a different view how to best capitalise on the former A-League journeyman’s skill and experience with Milligan earmarked as the man most likely to marshal the centre of defence alongside Trent Sainsbury.

Advertisement
After spending the entirety of the Socceroos three-week camp in Turkey training in the position, Miligan admitted the move from midfield to defence has taken a bit of an adjustment period but he was happy to knuckle down and fight for a single role.

“I was just put into centre back by the manager (van Marwijk) and have been training there ever since.

“It is not always easy getting shifted around or not knowing where I would be playing. For me it's a different way of playing and I have to do things differently to how I would play in midfield.

“Being able to fight for just one position also gives me a bit more hope.”

After not getting nay game time during Australia’s World Cup campaign in Germany in 2006 and South Africa in 2010, Milligan’s World Cup in Brazil was cruelly cut short by injury after going down during the Socceroos first match against Chile.

Milligan said he was not bothered by the fact he has only played 90 minutes in three World Cups and would not change his approach this time as he fights for a starting berth in van Marwijk’s side.

“For me it isn’t so much unfinished business. I don’t really have that feeling,” he said.

“Things haven’t changed too much for me over the years. During my first World Cups there wasn’t too many young players getting a chance and I had to fight continuously to be here.

“I’m willing to work and fight hard and take whatever opportunity comes.”

If Milligan is given the nod to start in central defence for the Socceroos' first game of the tournament he is set to face a baptism of fire against a high powered France attack featuring global start the likes of Paul Pogba, Kylian Mbappe, Antoine Griezmann and Olivier Giroud.

“It's going to be a massive challenge not just for the back four but the whole team,” Milligan said.

“I think they have pace and quality all over the place no matter who France plays. We are under no illusions that it will be anything but a massive challenge.

“We are going to be focused defensively on our position and shutting down any type of attack. That is why we work so hard in the lead up and why the coach wanted the team so fit.

“It doesn’t matter whether they go with two up front or pace or height, the way we set up in defence should be able to cover it.”