Postecoglou's boos for Broos as coaches clash over styles

Australia coach Ange Postecoglou has shot down claims by his Cameroon counterpart Hugo Broos that the Socceroos are route one exponents, to sprinkle extra spice on their Confederations Cup survival clash. 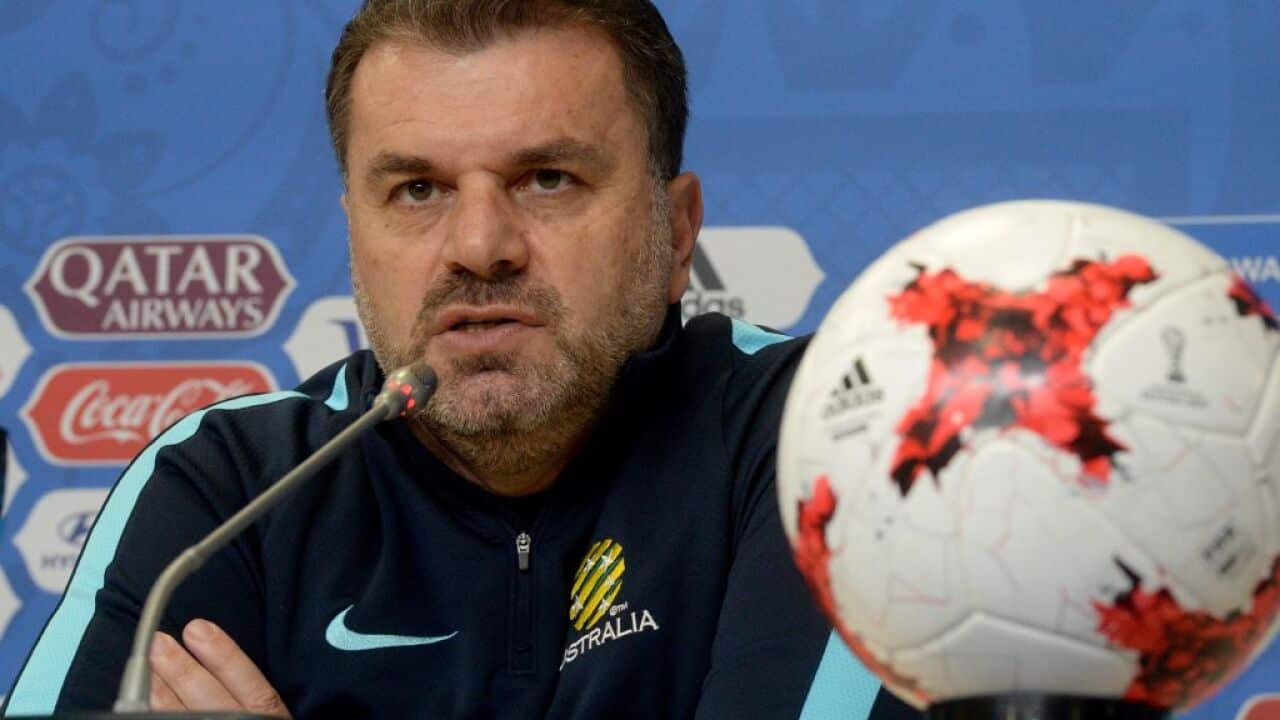 The style revolution wrought by Postecoglou during his four-year tenure has clearly been lost on the Belgian, who is expecting Australia to get the ball forward "as soon as possible" and not to bother with "too many combinations" when the sides collide at St Petersburg Stadium on Friday morning (AEST).

"Australia and Cameroon play two very different styles ... they play very direct without too many combinations and they try to be as soon as possible at goal," declared Broos, in an appraisal which appears to have more relevance with the past than the present.

"Australia is an English style, there is much enthusiasm and fighting spirit, good players also," he added.

"We have the same fighting spirit but our football is different.

"Australia play very directly with not much combinations ... we try more to combine and this is a big difference between the sides."

Broos' comments are at odds with Germany coach Joachim Low's appreciative critique of Australia's technical advances under Postecoglou, and they drew a justifiably terse response from the coach.

"A few people in Australia would be pleased with that," said Postecoglou, with more than a hint of irony in the light of recent scrutiny of his tactical machinations.

"All that kind stuff is about opinions and that's his opinion.

"I don't know what he's watching but from our perspective we know how we want to play our football.

"I think the World Cup winning coach saw it differently (when speaking after Germany's 3-2 victory over Australia in Sochi).

"You have two contrasting opinions and you choose to believe who you like."

The inference from Postecoglou was that Hugo Broos displayed all the football knowledge of Hugo Boss in his misreading of the nuances of the Australian national team.

Oddly, the 65 year old's observations - possibly based on some dusty pre-Postecoglou archive - come at a time when the latter's bold scriptures, and new 3-2-4-1 formation, are the subject of heated debate.

"I'm over the moon about the debate, it's exactly what I want," insisted Postecoglou.

"It's good to see the debate ... it's not just the usual empty vessels.

"There are some new voices that have some strong opinions both for and against what I'm doing.

"But that's exactly what we need if we're going to grow as a nation and find our identity, it's all going to come from vigorous debate.

"That's a massive positive for our game."

In reference to at least some of those who have questioned his chosen tactical path, he added pointedly: "They were there 20 years ago, I'm sure they will be there still in 20 years time."

In contrast to Broos, Postecoglou appears to have done his homework on Cameroon, even deploying spies at the African Cup of Nations.

"We are well aware of what they can bring, and they showed against Chile in moments that they can be very dangerous in transition," he observed.

"One lesson about the first game (against Germany)  was that if anything we probably needed to concentrate more on ourselves than paying too much respect to the opposition."

Postecoglou is primed to make "at least two changes" to the starting line-up, with Robbie Kruse likely to come in, with Aaron Mooy starting in a deeper role, and Massimo Luongo dropped for the clash against a Cameroon team beaten 2-0 by Chile first up.

Jackson Irvine could also gain a recall, along with defender Ryan McGowan.

"We knew that leading into it, with the games coming thick and fast, we would pretty much need the whole squad ready to go," added Postecoglou.

"It's why we used the Brazil game to get some match time into the guys.

"I'm confident the changes we make tomorrow will see the players who come in be ready to step up."