Quiet outing for Ryan as Valencia romp to victory 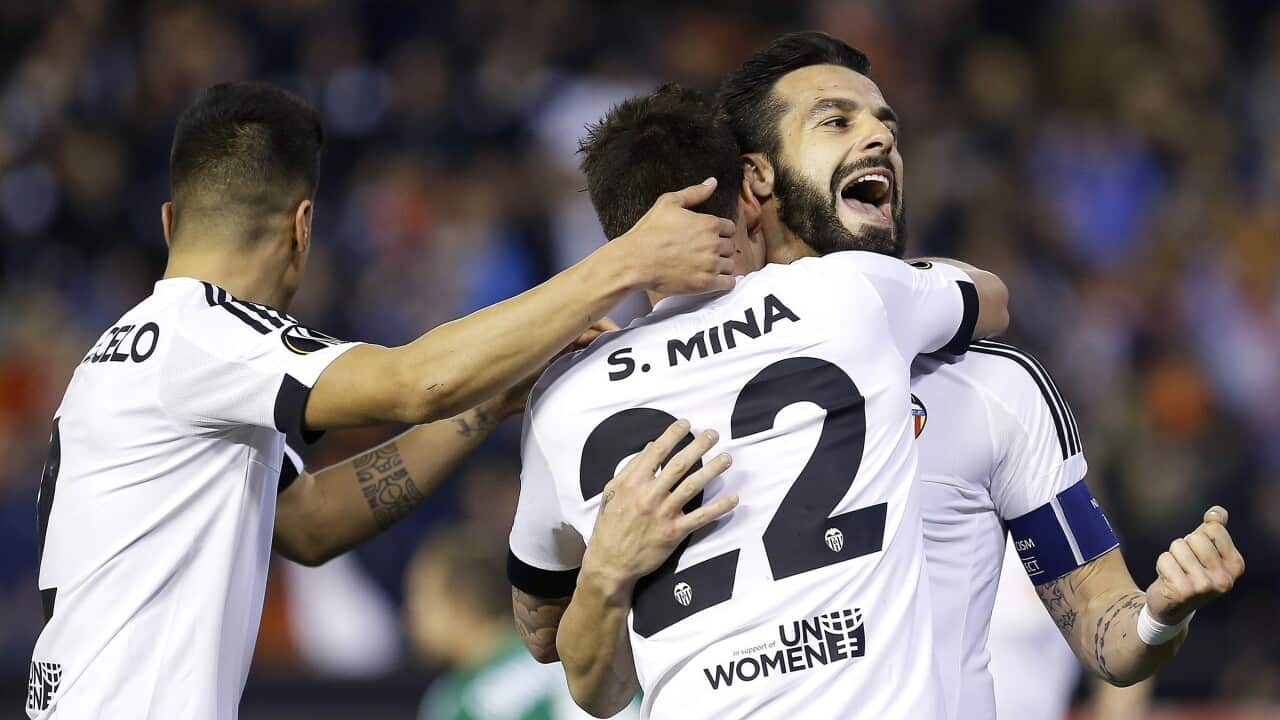 Australia's Mat Ryan was in goal for Valencia, who went on the rampage in the first half at the Mestalla as the outstanding Santi Mina struck twice and Daniel Parejo, Alvaro Negredo and Andre Gomes also got on the scoresheet.

Valencia eased off in the second half but substitute Rodrigo added a final gloss with a sixth goal in the 89th minute.

After the troubled start to his coaching career, this was just the fillip former Manchester United and England defender Neville needed.

And coming on the back of a long-awaited first La Liga win in 13 attempts against Espanyol, Neville can now look ahead to the weekend Primera Division trip to Granada with renewed optimism.

Rapid went into the game as joint leaders of the Austrian Bundesliga while Valencia remain in the bottom half in Spain, but Neville's men soon asserted their authority.

Just four minutes had gone when Mina tucked in his first with a neat finish from close range after good work by Gomes.

Mina then turned provider for the second on nine minutes, slipping in Parejo with a superbly-weighted ball. Parejo timed his run behind the defence perfectly and calmly fired past Richard Strebinger.

Negredo had two good efforts before Mina added the third after 25 minutes. Pablo Piatti's cross from the left may actually have been meant for Negredo but Mina was in the right place to turn in after the ball evaded the former Manchester City striker.

Negredo got his goal four minutes later after yet more brilliance from Mina, who showed great skill and pace to touch the ball past Maximilian Hofmann and break clear. He then whipped in a perfect low cross for Negredo to slide home.

Mina also set up the fifth 10 minutes before the interval after again getting the better of Maximilian Hofmann with some tricky footwork. He then followed by clipping over a fine cross for Gomes to convert at the far post.

Rapid made a change with just seconds of the first half remaining as captain Steffen Hofmann was taken off. It was unclear whether he was injured but the timing, with play being halted as soon as Srdjan Grahovac entered the field, was strange.

Valencia cruised through the second half with Rapid offering little.

Substitute Antonio Barragan went close to Valencia's sixth with a powerful drive after a good run, again after a pass by Mina.

Valencia goalkeeper Ryan was called into action late on to keep out a Matej Jelic header but Rodrigo had the final say with a shot that squirmed past Strebinger.